A geriatric old monarch of an erstwhile imperial power bestows the knighthood on Sri Salman Rushdie only to have him become the subject of renewed death threats, murderous bounties, fatwas, protests and much else besides. Were the Brits being clueles 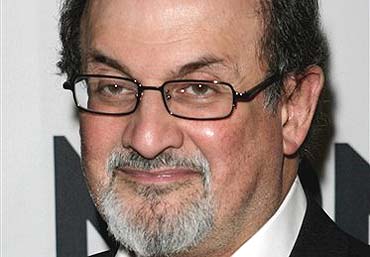 Salman Rushdie: "I am thrilled and humbled to receive this great honour, and am very grateful that my work has been recognised in this way."

Mohammad Ali Hosseini, foreign ministry spokesman, Iran: "Giving a medal to someone who is among the most detested figures in the Islamic community is... a blatant example of the anti-Islamism of senior British officials... The measure that has taken place for paying tribute to this apostate and detested figure will definitely put British statesmen and officials at odds with Islamic societies, the emotions and sentiments of which have again been provoked."

Ijaz-ul-Haq, Religious Affairs Minister, Pakistan, in national assembly: "If somebody has to attack by strapping bombs to his body to protect the honour of the Prophet, then it is justified ... If Britain doesn't withdraw the award, all Muslim countries should break off diplomatic relations with it."

[But the religious affairs minister, who's the son of Zia-ul-Haq, later tried to retract his statement by saying, "I was explaining that if the British government awards a knighthood to Salman Rushdie — whose only credibility is that he wrote a blasphemous book — then such action with encourage extremism. If someone blows himself up he will consider himself justified. How can we fight terrorism when those who commit blasphemy are rewarded by the West?"] 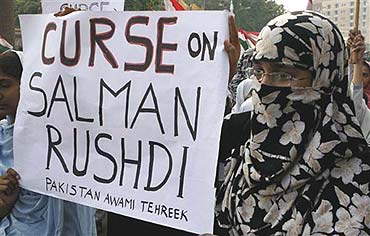 Abul Rashid Ghazi, cleric, Lal Masjid, Islamabad: "Salman Rushdie deserves to be killed and anyone who has the power must kill him ... if the Pakistani government cooperate the we will make arrangements to murder Rushdie here."

Afzal Sahi, Speaker, Central Punjab province assembly: "A blasphemer is liable to death, I will murder a blasphemer if he comes across me."

The Pakistan Ulema Council, a private body of more than 2,000 Islamic scholars, that conferred the honour title of "Saifullah" or Sword of God on Al Qaeda leader Osama bin Laden in an apparent response: "We have awarded this title in reply to Britain's decision to knight blasphemer Rushdie."

Stewart Jackson, Conservative MP & chairman of the all-party group on Pakistan: "Salman Rushdie was subjected to one of the most famous death sentences in the 20th Century. If the senior officers of the Foreign and Commonwealth Office were not able to use their knowledge of the Islamic world to consider the likely ramifications of this decision, then I'm extremely concerned."

John Reid, home secretary, UK: "We have to be sensitive, but I think that we take the approach that in the long-run the protection of the right to express opinions in literature, argument and politics is of over-riding value to our society. We have very strong laws about promoting racial intolerance. It isn't a free-for-all. We've thought very carefully about it. But we have a right to express opinions and a tolerance of other people's point of view, and we don't apologise for that."

Margaret Beckett, foreign secretary, UK: "Obviously, we are sorry if there are people who have taken very much to heart this honour, which is after all for a life-long body of literary work. This is part of the pattern that people who are members of the Muslim faith are very much part of our whole wider community." 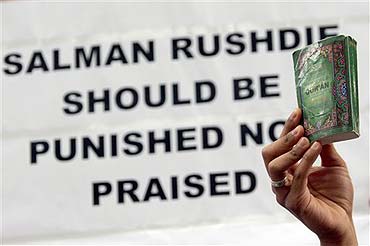 John Sutherland, critic: "It's astonishing that Tony Blair, among others, has been so reluctant to be seen shaking Rushdie's hand, and here he is getting a knighthood from the Queen."

Ian McEwan, author: "I am delighted for him. He's a wonderful writer, and this sends a firm message to the book-burners and their appeasers."

Jiøí Gruša, International President of International PEN: ‘The comments made about Salman Rushdie’s knighthood and the hateful reactions to it, serve to highlight the complexities of human life and the role of literature in reflecting and debating these complexities, and furthering understanding,’

Joanne Leedom-Ackerman, International Secretary of International PEN: "Salman Rushdie is a major writer whose works of imagination have engaged and galvanised society as important writing does. International PEN takes no position on the honours given by any government but celebrates writers being honoured and opposes those who would, through intimidation and inflammatory statements, try to curb freedom of expression. The 144 Centres of International PEN in 101 countries worldwide may however, choose to recommend such honours. Rushdie was honoured for services to literature and that service has also included his own defence of freedom of expression for writers around the world."

Hari Kunzru, author: "Salman Rushdie's knighthood is a recognition by Britain of his importance to the global cultural scene, and the pathways he has opened, not just for English literature, but the English language. The idea that it is some kind of calculated insult is an absurdity. The real insult - to the intelligence and decency of "the world's 1.5 billion muslims", for whom people such as Mohammed Ijaz ul-Haq, religious affairs minister of Pakistan, presume to speak - comes from the ignorance and paranoia of leaders who feel so threatened by a novelist that they'll call for him to be killed."

Lisa Appignanesi, author: 'It is hardly unexpected, yet nonetheless bizarre, that the Queen's recognition of Salman Rushdie's achievement by honouring him with a knighthood should raise such a storm of controversy. Judged purely in cultural rather than in political terms, after all, Rushdie is undeniably amongst the greats of British literature. He is the Dickens of our times. A visionary realist, his superbly inventive, grandly comic stories chart the great social transitions of our globalising, post-colonial world, with its migrations, its teeming hybrid cities, its clash of unlikenesses, its extremes of love and violence. They do so with a richness of language and narrative which is unsurpassed. For Iran's Foreign Ministry to wade into our honours system and portray the decision to honour Rushdie as 'an orchestrated act of aggression directed against Islamic societies' is to repeat the mistake which began with their Ayatollah Khomeini's Fatwa. That killing review chose utterly to misunderstand the place fiction occupies in the west and subject it to a fundamentalist jurisdiction which essentially recognizes only one book, and that one holy. The journalists, writers and academics who languish in Iran's prisons are a mark of that regime's intolerance of any form of dissent. This is hardly the Islam that most Muslims in Britain would wish to support.'

Linda Grant, author: "We honour Salman Rushdie for his huge gifts as a writer. Writing gives offence, that is part of its role. I am enraged by the campaign to threaten Britain for honouring one of its greatest writers."

David Mitchell, author: "Salman Rushdie is a major figure in English literature, and deserves not only this honour, but also the support of anyone who believes in the freedoms of speech, religion and thought."

Kathy Lette, author: "On Saturday Salman Rushdie was awarded a knighthood. Being Australian, of course, I'm slightly allergic to royal anointing of any kind. (Although one reason to accept a Knighthood would be the fun it would give you being able to describe all future casual romantic liaisons as 'a one knight stand.') But I am definitely in favour of celebrating the achievements of writers. And I'm particularly in favour of celebrating the achievements of Salman Rushdie, who deserves to win every accolade imaginable for his creative gifts, but also for his immense bravery."