The Fourth Horseman Of The Apocalypse

This storm’s name shouldn’t be Sandy; it should be Climate Change. If each catastrophe came with a message, then this one’s was that global warming’s here, that the old rules don’t apply, 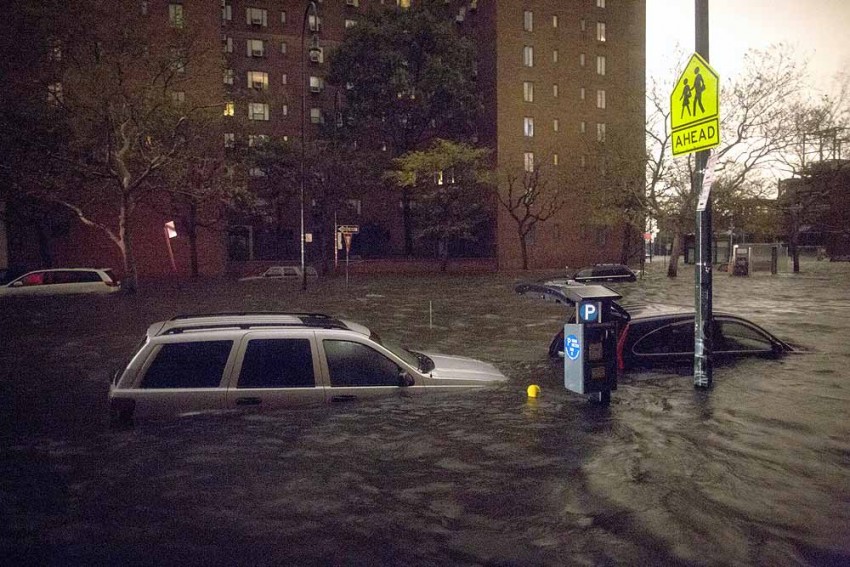 Rebecca Solnit November 06, 2012 00:00 IST The Fourth Horseman Of The Apocalypse 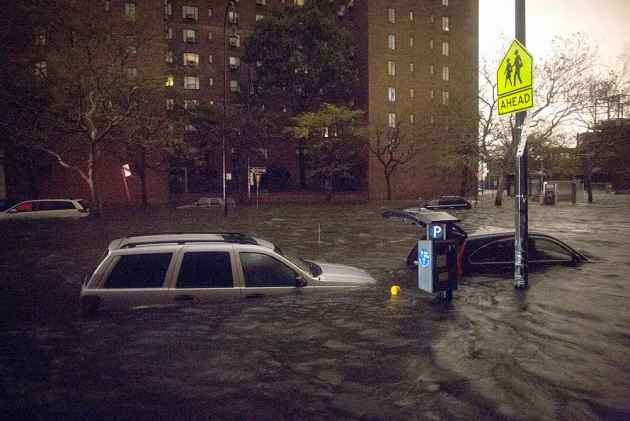 The first horseman was named al-Qaeda in Manhattan, and it came as a message on September 11, 2001: that our meddling in the Middle East had sown rage and funded madness. We had meddled because of imperial ambition and because of oil, the black gold that fuelled most of our machines and our largest corporations and too many of our politicians. The second horseman came not quite four years later. It was named Katrina, and this one too delivered a warning.

Katrina’s message was that we needed to face the dangers we had turned our back on when the country became obsessed with terrorism: failing infrastructure, institutional rot, racial divides, and poverty. And larger than any of these was the climate -- the heating oceans breeding stronger storms, melting the ice and raising the sea level, breaking the patterns of the weather we had always had into sharp shards: burning and dying forests, floods, droughts, heat waves in January, freak blizzards, sudden oscillations, acidifying oceans.

The third horseman came in October of 2008: it was named Wall Street, and when that horseman stumbled and collapsed, we were reminded that it had always been a predator, and all that had changed was the scale -- of deregulation, of greed, of recklessness, of amorality about homes and lives being casually trashed to profit the already wealthy. And the fourth horseman has arrived on schedule.

We called it Sandy, and it came to tell us we should have listened harder when the first, second, and third disasters showed up. This storm’s name shouldn’t be Sandy -- though that means we’ve run through the alphabet all the way up to S this hurricane season, way past brutal Isaac in August -- it should be Climate Change.  If each catastrophe came with a message, then this one’s was that global warming’s here, that the old rules don’t apply, and that not doing anything about it for the past 30 years is going to prove far, far more expensive than doing something would have been.

That is, expensive for us, for human beings, for life on Earth, if not for the carbon profiteers, the ones who are, in a way, tied to all four of these apocalyptic visitors. A reasonable estimate I heard of the cost of this disaster was $30 billion, just a tiny bit more than Chevron’s profits last year (though it might go as high as $50 billion). Except that it’s coming out of the empty wallets of single mothers in Hoboken, New Jersey, and the pensions of the elderly, and the taxes of the rest of us. Disasters cost most of us terribly, in our hearts, in our hopes for the future, and in our ability to lead a decent life. They cost some corporations as well, while leading to ever-greater profits for others.

If you wanted, you could even add a fifth horseman, a fifth disaster to our list, the blowout of the BP well in the Gulf of Mexico in the spring of 2010; cost-cutting on equipment ended 11 lives and contaminated a region dense with wildlife and fishing families and hundreds of thousands of others. It was as horrendous as the other four, but it took fewer lives directly and it should have but didn't produce political change.

Each of the other catastrophes has redirected American politics and policy in profound ways. 9/11 brought us close to dictatorship, until Katrina corrected course by discrediting the Bush administration and putting poverty and racism, if not climate change, back on the agenda. Wall Street's implosion was the 2008 October Surprise that made Americans leave Republican presidential candidate John McCain's no-change campaign in the dust -- and that, three years later, prompted the birth of Occupy Wall Street.

The Wall Street collapse did a lot for Barack Obama, too, and just in time another October surprise has made Romney look venal, clueless, and irrelevant. Disaster has been good to Obama -- Katrina’s reminder about race may have laid the groundwork for his presidential bid, and the financial implosion in the middle of the presidential campaign, as well as John McCain’s disastrous response to it, may have won him the last election.

The storm that broke the media narrative of an ascending Romney gave Obama the nonpartisan moment of solidarity he always longed for -- including the loving arms of New Jersey Governor Chris Christie. But it’s not about the president; it’s about the other seven billion of us and the rest of the Earth’s creatures, from plankton to pikas.

Hope in the Storm

Sandy did what no activist could have done adequately: put climate change back on the agenda, made the argument for reasonably large government, and reminded us of the colossal failures of the Bush administration seven years ago. (Michael “heckuva job” Brown, FEMA's astonishingly incompetent director under George W. Bush, even popped up to underscore just how far we've come.)

Maybe Sandy will also remind us that terrorism was among the least common, if most dramatic, of the dangers we faced then and face now. Though rollercoasters in the surf and cities under water have their own drama -- and so does seawater rushing into the pit at Ground Zero.

Clearly, the game has changed. New York City’s billionaire mayor, when not endorsing police brutality against Wall Street’s Occupiers, has been a huge supporter of work on climate change.  He gave the Sierra Club $50 million to fight coal last year and late last week in Sandy’s wake came out with a tepid endorsement of Obama as the candidate who might do something on the climate. Last week as well, his magazine, Bloomberg Businessweek, ran a cover that could’ve run anytime in the past few decades (but didn’t) with the headline: “It’s global warming, stupid.”

There are two things you can hope for after Sandy. The first is that every person stranded without power, running water, open grocery stores, access to transportation, an intact home, and maybe income (if work isn’t reachable or a job has been suspended) is able to return to normal as soon as possible. Or more than that in some cases, because the storm has also brought to light how many people were barely getting by before.  (After all, we also use the word “underwater” for people drowning in debt and houses worth less than what’s owed on their mortgages.) The second is that the fires and the water and the wind this time put climate change where it belongs, in the center of our most pressing issues.

We Have Power! How Disasters Unfold

A stranger sent me a widely circulated photograph of a front gate in Hoboken with a power strip and extension cord and a little note that reads, “We have power! Please feel free to charge your phone.” We have power, and volunteers are putting it to work in ways that count. In many disasters, government and big bureaucratic relief organizations take time to get it together or they allocate aid in less than ideal ways. The most crucial early work is often done by those on the ground, by the neighbors, by civil society -- and word, as last week ended, was that the government wasn’t always doing it adequately.

Hurricane Sandy seems to be typical in this regard. Occupy Wall Street and 350.org got together to create Occupy Sandy and are already doing splendid relief work, including for those in the flooded housing projects in Red Hook, Brooklyn. My friend Marina Sitrin, a scholar and Occupy organizer, wrote late last week:

“Amazing and inspiring work by community and Occupy folks! Hot nutritious meals for many hundreds. Supplies that people need, like diapers, baby wipes, flashlights etc., all organized. Also saw the first (meaning first set up in NYC -- only tonight) scary FEMA site a few blocks away. Militarized and policed entrance, to an area fenced in with 15-foot fences, where one gets a sort of military/astronaut ration with explanations of how to use in English that I did not understand. Plus Skittles?”

Occupy, declared dead by the mainstream media six weeks ago, is shining in this mess. Kindness, solidarity, mutual aid of this kind can ameliorate a catastrophe, but it can’t prevent one, and this isn’t the kind of power it takes to pump out drowned subway stations or rebuild railroad lines or get the lights back on. There is a role for government in disaster, and for mobilizing all available forces in forestalling our march toward a planet that could look like the New Jersey shore all the time.

When Occupy first began, all those tents, medical clinics, and community kitchens in the encampments reminded me of the aftermath of an earthquake.  The occupiers looked like disaster survivors -- and in a sense they were, though the disaster they had survived was called the economy and its impacts are usually remarkably invisible. Sandy is also an economic disaster: unlimited release of carbon into the atmosphere is very expensive and will get more so.

The increasingly turbulent, disaster-prone planet we’re on is our beautiful old Earth with the temperature raised almost one degree celsius. It’s going to get hotter than that, though we can still make a difference in how hot it gets. Right now, locally, in the soaked places, we need people to aid the stranded, the homeless, and the hungry. Globally we need to uncouple government from the Big Energy corporations, and ensure that most of the carbon energy left on the planet stays where it belongs: underground.

After the Status Quo

Disasters often unfold a little like revolutions. They create a tremendous rupture with the past. Today has nothing much in common with yesterday -- in how the system works or doesn’t, in what people have in common, in how they see their priorities and possibilities. The people in power are often most interested in returning to yesterday, because the status quo was working for them -- though Mayor Bloomberg is to be commended for taking the storm as a wake-up call to do more about climate change. For the rest of us, after such a disaster, sometimes the status quo doesn’t look so good.

Disasters often produce real political change, not always for the better (and not always for the worse). I called four of the last five big calamities in this country the four horsemen of the apocalypse because directly or otherwise they caused so much suffering, because they brought us closer to the brink, and because they changed our national direction. Disaster has now become our national policy: we invite it in and it directs us, for better and worse.

As the horsemen trample over all the things we love most, it becomes impossible to distinguish natural disaster from man-made calamity: maybe the point is that there is no difference anymore. But there’s another point: that we can prevent the worst of the impact in all sorts of ways, from evacuation plans to carbon emissions reductions to economic justice, and that it’s all tied up together.

I wish Sandy hadn’t happened. But it did, and there have been and will be more disasters like this. I hope that radical change arises from it. The climate has already changed. May we change to meet the challenges.

Rebecca Solnit wrote about disasters and civil society in A Paradise Built in Hell: The Extraordinary Communities That Arise in Disaster and in many reports for TomDispatch, courtesy which this piece appears here, and other websites. Copyright 2012 Rebecca Solnit