Full text of the written complaint in the "cash for vote" scandal on July 22: We met Shri Amar Singh at his residence ... he spoke to Shri Ahmed Patel on phone and said, "I have three more Kamals (Lotuses) here." 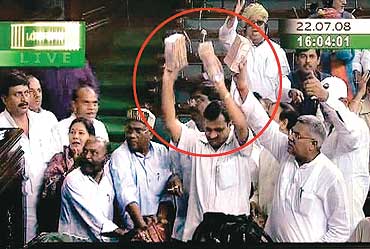 1: You may kindly recall that on July 22, 2008 we had personally met you in your chamber and recounted the scandalous manner in which we were sought to be bribed by leaders of the Congress and the Samajwadi Party to help the UPA Government by refraining from voting against the Confidence Motion. Pursuant to our oral complaint made in your chamber on 22 July, you had promised on the floor of the House to order investigation and to take appropriate action against all those responsible. In response to your letter dated 23 July 2008 received late night, we are hereby giving a written complaint.

The detailed facts are as follows:

2: The UPA Government lost its majority on 9 July 2008 when the Left parties withdrew support to it. This led to Respected Rashtrapatiji asking the Prime Minister to seek the trust of the House in a special session of the Lok Sabha on 21-22 July.

Even though the Samajwadi Party had pledged its support to the UPA Government on 9 July, it was obvious from the numerical representation of various parties in the House that the UPA Government was in no position to prove its majority without engineering defections from the non-UPA ranks. Leaders of the Congress and the Samajwadi Party started boasting about large-scale defections from non-UPA parties. Some sections of the media even published names of non-UPA MPs who were going to either vote for the Government or abstain from voting. On 14 July, Shri A.B. Bardhan, General Secretary of the Communist Party of India alleged at a public rally in New Delhi that the Congress-led UPA was indulging in horse-trading and mentioned an ongoing rate of Rs 25 crore per MP. The entire nation was shocked to hear this.

On 20 July Shri Amar Singh announced at a press conference in New Delhi that BJP MP, Shri Brij Bhushan Sharan Singh, would support the Government in the trust vote. With Shri Brij Bhushan Sharan Singh by his side at the widely covered press conference, Shri Amar Singh also claimed that more non-UPA MPs would defect soon. "We have opened our first card," he stated. "When we open our other cards on 22 July, many will be taken aback."

3: Apart from MPs from other non-UPA parties and independent MPs, our names also were being mentioned in the list of "soft targets" and that we were vulnerable. Many power-brokers through their intermediaries contacted us but we did not take their approaches seriously. When we were approached directly, we decided to expose the masterminds of the cash-for-votes racket.

4: We contacted CNN-IBN news channel, which deputed its correspondent Shri Siddharth Gautam to record the whistle-blowing operation and to expose the UPA’s unethical plot to convert its minority Government into majority Government by stooping to any levels.

5: In the first instance, on July 21, one of the intermediaries took us to Meridian Hotel where he said a senior Congress leader would meet us and give us money for abstaining in the trust vote. This meeting, however, did not materialize.

6: Late in the evening on July 21, we received a message from Shri Reoti Raman Singh, a senior leader of the Samajwadi Party and its MP, that he would meet us at the residence of Shri Ashok Argal at 4 Ferozshah Road. He came after midnight. He promised us that our interests would be taken care of and that we should accompany him to meet Shri Amar Singh. He further maintained that we should have a face to face meeting with Shri Amar Singh and that all issues including the amount payable to us would be settled by him. The entire meeting and conversation was recorded by the CNN-IBN team, which had bugged the room with hidden cameras.

7: The next morning, on July 22, two of us — namely, Shri Ashok Argal and Shri Fagan Singh Kulaste — were taken for the meeting with Shri Amar Singh at his residence at 27 Lodhi Estate, New Delhi. We went in car no. DL-7S-1882, a white Maruti Zen. Our car was followed by CNN-IBN’s car with Shri Sidharth Gautam. Our visit to Shri Amar Singh’s house and back was video recorded by the CNN-IBN reporter.

8: We met Shri Amar Singh at his residence. He boasted that although he had already "managed" the requisite number, still since Shri Reoti Raman Singh had met us and arranged the meeting, he would pay Rs. 3 crore each for abstaining from voting on July 22. We mentioned that we have one more MP willing to abstain. He agreed to pay the same amount to the third MP. Thereafter, he spoke to Shri Ahmed Patel on phone and said, "I have three more Kamals (Lotuses) here." He also made us speak to Shri Ahmed Patel, who gave his consent to the arrangement.

Shri Amar Singh offered to pay us an initial token amount of Rs. one crore and asked us to carry it with us. We declined, saying it was unsafe with journalists standing outside his house. Shri Amar Singh promised to send the amount with his assistant, Shri Sanjeev Saxena, within 15 minutes.

9: As per Shri Amar Singh’s promise, his assistant, who indeed identified himself as Shri Sanjeev Saxena, arrived at 4 Ferozshah Road soon after our reaching there. He and his colleague came in a white Gypsy car no. DL-2C-S-8562, which was noted down by our staff. He was led into the same drawing room, which had already been bugged with hidden cameras. Shri Saxena and one more person accompanying him had carried the money in a bag and emptied its contents on a table in front of the chairs on which we were sitting. The amount of Rs. 1 crore was in ten bundles of Rs. 10 lakhs each, most of it in currency notes of Rs. 1000.

10: Shri Saxena asked for the identification of the third MP, whom Shri Ashok Argal introduced as Shri Mahavir Baghora. Shri Saxena kept trying to connect Shri Amar Singh’s telephone number, which was repeatedly coming busy. Finally, he got all three of us to speak to Shri Amar Singh. After we three spoke to Shri Amar Singh, Shri Saxena gave the money to us on behalf of Shri Amar Singh. This money of Rs. one crore was the initial token amount and the balance of Rs. 8 crore was promised to be paid later. This entire episode was also recorded by the CNN-IBN team.

11: Besides Shri Sidharth Gautam, three more persons from the CNN-IBN team were present in Shri Argal’s house. Also present in the house was one of our Party colleagues.

12: After Shri Sanjeev Saxena’s departure, the CNN-IBN team rearranged the bundles on the table and captured on camera the serial numbers of the first and the last currency notes in each of the ten bundles.

13: Thereafter, Shri Siddharth Gautam conducted an elaborate interview with us in the same room, with the amount of Rs. 1 crore placed in front us on the table. The interview was recorded on a regular camera and included a full narration of the entire sequence of two days.

Shri Siddharth Gautam then recorded an introduction for a promo to the investigative report which, among other things, said, "For the first time in the history of Indian Parliament, the scandal of horse-trading has been captured on camera by the investigative team of CNN-IBN."

14: The CNN-IBN team completed their recordings, removed their bugging equipment from the room and left the house of Shri Ashok Argal at around noon on July 22. Before departing, the team assured us that the programme, along with the promo, would be telecast soon.

15: At around 4.30 pm, we walked up to the table of the Secretary General, in front of the Speaker’s Chair, took out the money from the bags and displayed it before all the Honourable Members as tell-tale proof of the "cash for votes" scandal. We also wanted to establish before Parliament and the nation the level to which the UPA had stooped to procure a majority which they did not have. In doing so, we were motivated by the desire to save democracy from pernicious influence of money power.

16: The House was adjourned and we were called to your Chamber. We narrated all the events to your Honourable Self in the presence of leaders of various political parties. The money given by Shri Amar Singh was deposited in your office against receipt.

17: In view of the gravity of the bribery scandal and blatant inducement to Members of Parliament to defy their party whips, illegally help the Government to cobble a majority, and thereby subvert Constitutional and parliamentary norms, we would request you to take prompt and the most stringent action against the wrong-doers to uphold the dignity of democracy.

18: This attempt to subvert the functioning of Parliament by inducements and bribery, especially in a session devoted to the confidence motion, besides being a matter of violation of ethics is also a breach of privilege. We reserve our right to initiate criminal law action in the matter.

Mahavir Baghora
(Member of the Lok Sabha from Salumbar, Rajasthan)