A formula for ending the infighting in the BJP and putting an end to the fiction of it being an independent entity: Mohan Rao Bhagwat should consider a direct takeover of the BJP. 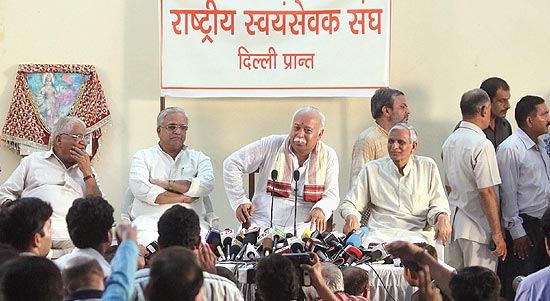 As a journalist who attended the press conference of the Rashtriya Swayamsevak Sangh (RSS) chief Mohan Rao Bhagwat, I must confess to being impressed by the man. He was clear, lucid and did not beat around the bush about how much the RSS can do to get the (Bharatiya Janata Party) BJP out of its current mess. He fielded all the questions from the media and was very clear in laying down the line.

So I offer a formula for ending the infighting in the BJP and putting an end to the fiction of it being an independent entity. Mohan Bhagwat should consider a direct takeover of the BJP. I am certain there will be no problem in rewriting the party’s constitution (that the Sangh would have written anyway) and insuring that the BJP president is allowed the dual charge of being RSS Sarsanghachalak as well.

Indeed I would go a step further and state that since he is so clearly the Brahma-Vishnu-Mahesh of the BJP/RSS he should also take-over the constitutional post of Leader of the Opposition that we are told L.K. Advani will vacate soon. I know that means the sarsanghachalak will have to contest an election but that should pose no problem as all the chief ministers of BJP states will bend over backwards to offer him a good seat from their areas. I am certain that even Narendra Modi would oblige him.

In fact, Bhagwat should eventually consider being LoP in both the Lok Sabha and Rajya Sabha but since that would involve amending the Constitution of India he should first focus on fixing the BJP constitution to ensure him unlimited power and authority that he seems to enjoy anyway. Consider what such an audacious move would achieve. All the BJP second rung would stop eyeing the few posts and the internecine war-fare would stop instantly. As it is, Bhagwat has achieved the remarkable feat of having Arun Jaitley and Sushma Swaraj drive up in the same vehicle to call on the sarsanghachalak along with Ananth Kumar and Venkaiah Naidu.

Clearly, he is the only man who can keep the Samjhauta Express on track.

Besides, he seems to have a natural flair and personality for politics. I have interviewed his predecessor K.S. Sudershan at length and would never have recommended a career in politics for him. But Bhagwat is so clearly different and does not talk in that woolly headed manner characteristic of RSS old-timers. He has a presence and personality. He is articulate in Hindi and English besides his mother tongue Marathi.

And he is so media savvy.

He also appears to be in the pink of health, and looks fitter than many of the so called second rung leaders of the BJP. I suspect he would be more adept at politics than the entire BJP lot. He is the sort of man one listens to when he speaks. He is clearly head and shoulders above the swayamsevaks the Sangh has recently sent to the BJP, almost all of whom are nondescript individuals.

I know that those who argue that the BJP should free itself of RSS control and evolve into a genuine right wing party would be aghast at this suggestion. But, hey, that’s not happening anyway and the BJP leaders are going crying to Bhagwat, so why not have the Big Brother take-over directly? Now there can be no denying after what the Indian public has witnessed that the Orwellian Big Brother is indeed watching.

There are many positive things the direct take-over would achieve. The Sangh would become accountable to the Indian public, the BJP’s health may improve as party leaders could then stop second guessing the RSS and take direct instructions from the Godfather.

And, most important, in the immediate context, Bhagwat would hold all the posts so the very pressing issue of who gets what would be settled at one stroke. And the task that the RSS describes as “nation-building” can then be resumed in right earnest.

And journalists would also benefit. We would then stop writing reams on the BJP-RSS relationship and would instead write profiles of Bhagwat and no longer have to hear nonsense about the BJP being an independent political party.