It was a familiar sight -choking and getting crushed by the Aussies in yet another finals after raising hopes throughout this series with an inspired performance. 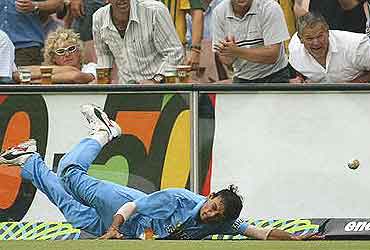 After posting a record 359 for five, Australia skittled out India for 151 in 33.2 overs in the second of a series of three finals to extend the domination over their subcontinent rivals.

Matthew Hayden set the platform with his fourth one-day hundred of 126 from 122 balls, before Andrew Symonds launched a blistering assault towards the end with a 39-ball 66.

Damien Martyn too rediscovered his form to make a typically stylish 67 from a mere 76 balls.

India, in a do or die match after having lost the first of the best-of-three finals at Melbourne on Friday, had their chase virtually sealed when they lost half their side inside 15 overs.

It was Australia's third successive title triumph over Sourav Ganguly's men following their wins in the World Cup final and another triangular tournament in India last year.

The Australian target was not only the highest ever in one-day internationals Down Under but also identical to the one they posted against India in the World Cup final in South Africa.

India, who were aspiring for the world number one status and had hitherto enjoyed a golden summer, saw their tour end on a sour note and had be content with the eternal bridesmaid tag.

Australia, who had struggled to crack the great Indian puzzle this season, proved they were big match players beyond doubt.

Their batsmen returned to the familiar domineering form that has helped them gain a stranglehold over the opponents in recent years while the new ball bowlers showed freshness of idea to curtail an equally strong batting line-up.

From the moment Ponting called the coin correctly and decided to bat first, it was all downhill for India.

Adam Gilchrist set the tone for the hosts with his quickfire 29 that came from 32 balls before being caught by Ganguly off Nehra.

Hayden then took control and intimidated the young Indian bowlers with his cavalier batting.

No sooner than Gilchrist was gone, Ponting (4) followed suit to leave Australia at 73 for two in the 12th over.

But Hayden and Damien Martyn added 157 runs in under 27 overs for the third wicket that took the match away from India's grasp.

Hayden, the world record holder for Test highest score, exercised a psychological domination over India's young seamers with his imposing figure in the middle.

He drove and pulled with his trademark arrogance that was not seen in the one-day series before. The burly left-hander reached his hundred in 95 balls that included three strong sixes and nine fours.

However, he slowed down a bit thereafter and seemed to suffer from what the commentators called "guilt complex".

Hayden was given the benefit of doubt for a close caught behind appeal from Irfan Pathan but was never the same batsman after that incident in the 39th over.

He made wild heaves and missed a few befor being bowled around his legs by Sachin Tendulkar.

Martyn rediscovered his form, at the wrong time for the Indians. His innings had class written all over it and the fans were treated to some elegant strokes, especially on the off, until he fell trying to hook Pathan (2-75) and holed out to Hemand Badani at squareleg.

Tendulkar (1-60) bowled a tidy spell of slow leg cutters and India looked like reining in the Australians to a managable total but Symonds' attack changed the script.

Symonds' partnership with Michael Clarke for the fifth wicket was 99 from 7.5 overs.

Ashish Nehra's last three overs went for 36 while Tendulkar conceded 17 off his last over.

Clarke remained unbeaten on 33 from 30 balls with three fours. Simon Katich was the other batsman not out on 11.

India started on a fantastic note with Virender Sehwag flicking Jason Gillespie over the fineleg for a six off the first ball.

But it soon turned that the down the leg delivery was not a bad bowling mistake but a clever strategy to trap the Indian batsmen gifted with magical wrists.

The next time Sehwag played a similar shot, Brett Lee plucked the ball out of the air at short fineleg.

Gillespie and Lee combined once more to see the back of Sachin Tendulkar (24) who until that moment had looked determined in breaking the jinx of big match nerves.

V V S Laxman, the batsman who had bewitched the Australians with his artistry throughout the summer, was dismissed in bizarre fashion, ruled caught and bowled by TV umpire.

Trying to fend a Lee yorker, Laxman dug his bat in time and the ball popped straight back to the bowler who immediately appealed. Umpire Rudi Koertzen was puzzled but nevertheless referred it to the third umpire who had no doubt about his verdict.

Rahul Dravid tried to steal a single but Martyn beat him with a direct hit before Ganguly played a rank cut shot for a simple catch to point off Ian Harvey.

The rest of the pack followed the captain's cue although Pathan did his no reputation no damage with a belligerent 30 off 41 balls with six fours.

Murali Kartik made a cameo 23 with the help of three fours but it mattered little as India suffered their second worst one-day defeat after the 245-run loss to Sri Lanka in Sharjah in 2000.