Aravind Adiga's The White Tiger is this year's Man Booker Prize winner, beating such favourites as Amitav Ghosh on the short and Salman Rushdie on the long list. 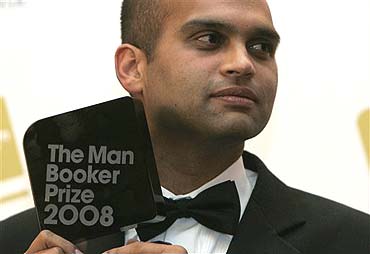 "It's not a book that's meant to ingratiate itself with anyone," Aravind Adiga had said in an interview about his debut novel The White Tiger which was then on the shortlist of the Man Booker Prize for Fiction 2008.

"The tone of it was meant to be provocative and even a bit nasty at times. It's meant to get people thinking," he had said.

Well, it certainly has got a lot of people thinking and has managed to ingratiate itself with Michael Portillo, former British MP and Cabinet Minister; Alex Clark, editor of Granta; Louise Doughty, novelist; James Heneage, founder of Ottakar's bookshops; and Hardeep Singh Kohli, TV and radio broadcaster.

For these were the judges on the panel that decided the winner of the Man Booker Prize this year and placed Aravind Adiga in the company of Salman Rushdie, Arundhati Roy and Kiran Desai--the select club of India-born winners of the Booker Prize has got its latest member. The august company of course could also include Nobel laureate Sir V.S. Naipaul, if we count him as Indian, even though he is not India-born.

The judging panel had had to read more than 112 entries before whittling down the list to the Man Booker Dozen (13 titles) and then again to just six titles, knocking out big name contenders such as Salman Rushdie and John Berger, in the process.

Former British Defence Minister Michael Portillo, Chair of the 2008 judges, made the announcement of the award, while Peter Clarke, Chief Executive of Man Group plc, presented Aravind Adiga with a cheque for £50,000 at a black-tie dinner on October 14, in London's medieval Guildhall.

Born in Chennai in 1974, Adiga is the second youngest to have won the prize after Ben Okri, whose "The Famished Road" won in 1991 when he was 32.

Adiga has studied at Columbia and Oxford Universities and is a former correspondent for Time magazine in India. He was raised partly in Australia and now lives in Mumbai. But it was the denizens of yet another city who came in for a special mention: "I would like to dedicate this award to the people of New Delhi," Adiga said on accepting the prize, adding that 300 years ago it was the most important city in the world and could become so again.

He is the third debut novelist, and the second Indian debut novelist, to win the Booker prize. Originally established in 1968 by food wholesaler Booker Plc, the prize has been sponsored since 2002 by Man Group Plc, the world's largest publicly traded hedge- fund manager. The two other debut novelists to have won the prize are DBC Pierre in 2003 for his novel Vernon God Little and Arundhati Roy in 1997 for The God of Small Things

Incidentally, the shortlist this year also included one more debut novelist in Steve Toltz for his debut novel A Fraction of the Whole. Bookmakers' favourite Sebastian Barry of Ireland for The Secret Scripture and Indian heavy-weight Amitav Ghosh for Sea of Poppies were the prominent names on the shortlist of six which also included Linda Grant for The Clothes on Their Backs and Philip Hensher for The Northern Clemency.

No wonder the judges found it a difficult decision to make. Adiga's book won by a "sufficient", but by no means unanimous, margin. "It was pretty close," as Michael Portillo put it: "In the end, The White Tiger prevailed because the judges felt that it shocked and entertained in equal measure."

Portillo drew a parallel with Macbeth. "It is about ambition realised through murder," he said, "but with a delicious twist. Whereas Lady Macbeth and Macbeth are driven mad by their crime, the hero of this book is only driven mad by the fact that he hesitated and might not have committed his crime."

Portillo went on to explain that the novel had won overall because of "its originality". He said that The White Tiger presented "a different aspect of India" and was a novel with "enormous literary merit".

The feeling, he said, was that this was new territory. "The novel undertakes the extraordinarily difficult task of gaining and holding the reader's sympathy for a thoroughgoing villain. The book gains from dealing with pressing social issues and significant global developments with astonishing humour," he said.

These are sentiments that were not shared by all those who read the book much before it got shortlisted for the award. As would be clear from the opening quotes from Adiga himself, who was perhaps still smarting from unflattering reviews he had received back home in India. Manjula Padmanabhan, for instance, had said: "I found the book a tedious, unfunny slog, but the back-cover blurb says it is "compelling, angry and darkly humourous".

"There's been a need for a book like this," Adiga said after the prize ceremony, citing a desire to give a voice to the "colossal underclass" of India. "There's something extraordinary happening in the chasm between the rich and the poor in India," he added.

Manjula Padmanabhan had agreed with the last statement: "Yes, the India Shining image that so many of us find nauseating in its dishonesty and complacency deserves to be reviled." She had, however, gone on to ask, "But is this schoolboyish sneering the best that we can do? Is it enough to paint an ugly picture and then suggest that the way out is to slit the oppressor's throat and become an oppressor oneself?"

The Booker jury seems to have agreed with the back-cover blurb. And historically, the prize has always resulted in increased sales and better reception.

So go on: read the book. You decide.

Dreams Do Not Die