The Dangerous Shyness Of Authority

Ravish Kumar needs to be applauded for telling us what decisions we need to take in order to confront this deceptive, deliberate gibberish of power. 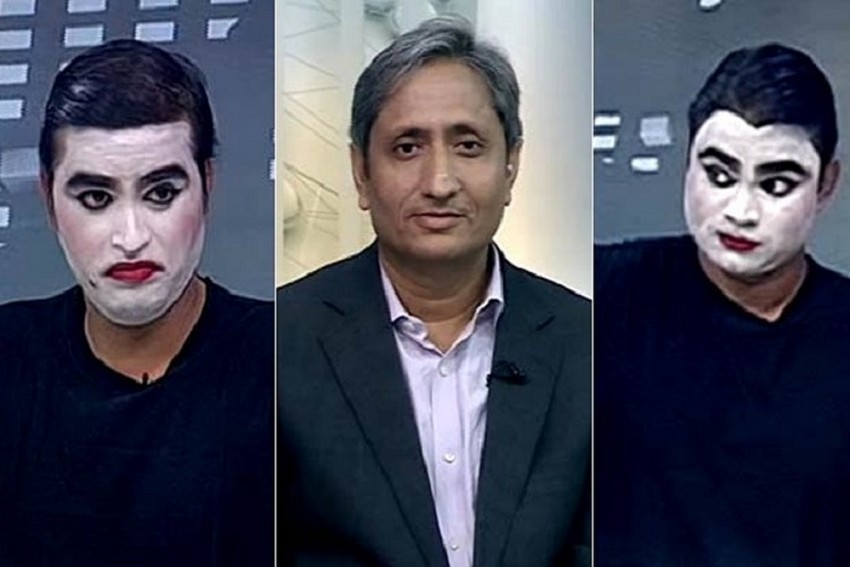 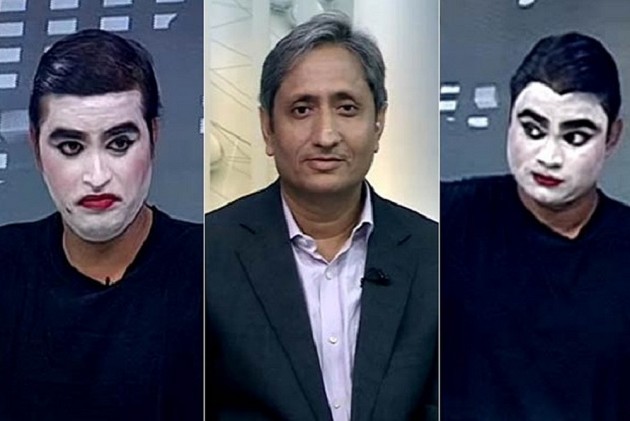 Ravish Kumar's November 4 Prime Time programme on NDTV India ban resembled the theatre of the absurd. The anchor faces two characters in his studio he identifies as Authority and Troll. But the anchor realises the two characters use words he doesn't understand. They speak in a language that sounds gibberish to his ears. He tries to locate them in places like Kazakhstan, Uzbekistan and Nepal. Both Authority and Troll are strange animals of a global network. It is difficult to decipher their real place in the world. But there is no confirmation of where they maybe from or what language they are speaking. Even if they confirm or deny association with the places the anchor mentions, there is no way the anchor can know about it.

The two characters respond to the anchor through mime, but it isn't that they are not using speech to explain themselves. It is only that the anchor, and we the viewers, don't understand what they are saying. It places the act of miming by the two guests into an unreliable, shifty zone where mime turns into mimesis: the miming characters produce a double-act of translating language into gestures as well as inventing a language mimicking power. There is a double- language at play in this play being enacted on screen where we are thrown into a performance inviting us to a world of intrigue and deception. It is an invitation to watch, to witness, an absurdist game that power is playing with us right now.

There is no "us" however, without this mediation between media and power. This mediation allows us to constantly, critically choose between the claims of power and the reality that dissects, challenges or contradicts those claims. The media's job is to throw light on power, and any attempt to strip the media of that authority is to terminate the mediation that sustains us as democratic subjects. In such a scenario, power masquerades as its own media, as a self-authorising mass communicator of itself. The power of the media collapses into the power of the government. Government becomes media and media becomes government. Suddenly certain terms, structures and organisations we understood, witnessed and read differently seem to be merging into a single meaning. The meaning of democracy, which is impossible without certain independent bodies that may hold power responsible for its claims and actions, seems to be slipping away into a singular, totalitarian form.

As we watch the conversation unfold between the anchor and the two guests, we first wonder if they were invited willfully by the anchor or they invited themselves, or perhaps the anchor was forced into inviting them in order to stall an escalating crisis. Whatever be the reason of their presence, they are comfortably seated in the two chairs facing the anchor, ready to face him. The anchor asks them questions which excite them in various ways, sometimes incurring wrath, fueling their anger, issuing threats, at other times pacifying them, keeping them amused, making them break into a song. Anything that lies outside the realm of sentiment, any question that doesn't cajole their nostalgia, is perceived as a threat, and most vehemently attacked with a flurry of noisy and wild gestures. The anchor is made to feel, he needs to be very careful, for these are two extremely touchy guests facing him.

Beneath the surface of this intriguing drama, things are really not as meaningful as they appear to be. There is a constant attempt by the anchor to draw meaning out of the conversation, to make it meaningful for him, and for us. But the anchor consistently fails to do that. The anchor and we are both on extremely slippery grounds of meaning. This is precisely where I am leading you into understanding this bizarre encounter as a theatre of the absurd.

We see the two guests identified as Authority and Troll by the anchor, responding to his questions. But are they responding to him? Are they really getting his questions? Or are they pretending? It is impossible to say. The anchor uses his own language to make sense of what his two guests are meaning to say. But there is no guarantee that the anchor is being able to read their responses correctly. He is merely conjecturing their answers, even though their gestures are sometimes readable as anger, elation or amusement. The anchor is in the midst of a strange familiarity as he bravely interprets the responses of the two guests. He is desperate to make sense of what his two guests are saying, for his own sake, and for ours. But meaning eludes him and us as he keeps repeating his questions, begging the question of the question whether he has the freedom and authority to demand answers from authority.

Meaning eludes us and the anchor because both guests don't offer us a language we can decipher. We can't hold them responsible for uttering gibberish, or a language we don't understand. The two guests entrap the anchor into a game where the anchor is always losing, always being reduced to a fool, despite suspecting, knowing, what he is being deliberately made a fool about. Uncommunicative power unleashes a game that transforms subjects into fools, not because the subject does not know her condition but because s/he is denied the language of a response. The ability to take away the power of a citizen's response is the game totalitarianisms play.

Even though the two miming guests playing at mimesis seem to be involved with the anchor, they are really not involved in a meaningful way, or at least in the way the anchor would want them to. You cannot take them seriously. At one point, the anchor seems to realise he has figured out the game they are playing, when he asks Authority if he has passed on his "accountability" to the Troll. From the various accounts, false or real, that trolls have unleashed on social media, accounts without accountability, it is interesting to note the anchor raise the question of a shared accountability (and account) between Authority and Troll.

False or fake accounts of trolls are busy day and night in giving false accounts of others and of themselves. They are accounts without accountability. No wonder, the anchor asks them, you really stay awake all night, chasing people even in their dreams? Trolls don't sleep, for their job is to keep their (un)authorised authority awake when the master asleep. Totalitarian power cannot sleep even when it does, for it needs to keep vigil over time. Trolls enter the dreams of others to ensure people never dream their own dreams. Totalitarian power seeks to erase the borders between sleep and wakefulness.

We learn with the anchor, troll and authority are working in tandem to produce deceptive borders of accountability, where it is impossible to know where one begins and the other ends. We are back to realising the game, between language and gibberish, between meaning and meaninglessness, between anchor and guest and between both and us, the audience. We are witnessing a simulacrum of democracy, where everything is real and unreal at the same time, call it Orwellian, Kafkaesque, but in simple terms, a trap, a newsroom, a spectatorship.

The two guests often behave as if they weren't adults. They play at being children. Even this is a double game, for they look like adults paying at being children or children playing at being adults. It is this incomprehensibility that creates a shock element between their anger and their shyness. In Walter Benjamin's essay on Kafka, he mentions an illuminating saying of the people in The Castle who live at the foothill: "We have a saying here that you may be familiar with: Official decisions are as shy as young girls." To which K. replies, "That's a sound observation. Decisions may have even other characteristics in common with girls." The most remarkable of these qualities, Benjamin infers from Kafka, is "the willingness to lend oneself to anything."

There seems to be a suggestion that shyness is the other side of recklessness, that shyness is a mask, an act of miming that misleads. Power is shy, behaves shyly, the way Authority and Troll play at it, so that it can also alternately play at sternness and get angry, thus denying the anchor any ground to place his democratic and ethical appeal, so that he may establish the meaning he is seeking, for himself and for us, that of a functioning democracy.

The dangerous shyness of Authority and the dangerous vileness of the Troll resemble two ends of what is at play with the meaning of democracy today. It isn't however a game being played without rules, for there is a decision that hides behind it. That decision which helps Authority and Troll together masquerade as shy and angry, is the rule. And yet by his persistent, calm questioning, the anchor keeps up his challenge.

The anchor pauses, allows the two guests to enact their absurdities and asks his question: Do you drink water, or just throw it away? The anchor's questions are his dogged resistance against absurdity, challenging the muzzling of his voice, trying to show the current, one-sided state of democracy. Neither Authority nor Troll are interested in the life and death of farmers and school teachers, of their suicide and salary, their demands. Suffering citizens are supposed to simply offer their silence to pacify touchy nationalists.

Ravish Kumar needs to be applauded for telling us not only what is at stake, but what decisions we need to take in order to confront this deceptive, deliberate gibberish of power.

Manash Firaq Bhattacharjee is a poet, writer and political science scholar from JNU. He has most recently contributed to Words Matter: Writings Against Silence, edited by K. Satchidanandan (Penguin India, 2016). He is currently an adjunct professor in the School of Culture and Creative Expressions at Ambedkar University, New Delhi.

'Censorship Imposed By The Government Reminiscent Of The Emergency'