An essay is circulating on the internet by a Leo Casey entitled The Unbearable Whiteness of Chomsky's Arguments referring to Chomsky's interactions with Hitchens. Chomsky replied and then Casey responded again. Here is Chomsky's second reply m 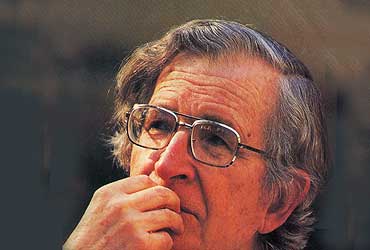 Apologies to participants in the forum for wasting time that is scarce and needed for important matters on such transparent nonsense, but I presume this will be the last time.

Casey's primary argument is that I am guilty of the crime of "moral equivalence." He reaches this conclusion on the basis of my brief "quick reaction" (as it is labeled) in response to queries from journalists immediately after the Sept. 11 atrocities. The moral equivalence is this. There is a single sentence that mentions "Clinton's bombing of the Sudan with no credible pretext, destroying half its pharmaceutical supplies and probably killing tens of thousands of people," though how many "no one knows" -- the primary reason being that the matter was considered so uninteresting in the West that there was no careful investigation.

The rest of the "quick reaction" discussed the Sept. 11 attacks, describing them as "major atrocities," committed with "wickedness and awesome cruelty," noting that it "is not in doubt...that this was a horrendous crime."

According to Casey, this description of Sept. 11 is "morally equivalent" to a bare unadorned statement of the facts of Clinton's bombing. Since no sane person could accept this absurd conclusion, and Casey is surely sane, we conclude that he plainly does not mean what he is saying. The only explanation that comes to mind is that he seeking to cover up for something else. What that is, he is kind enough to tell us, in his angry denial of his responsibility for the crimes for which he is plainly responsible, as I am too, for exactly the reasons I stated, and will not repeat.

The rest of his letter attempts to conceal all of this with a cloud of distortions and irrelevancies, though fortunately he has dropped many of the weirdest charges (e.g., that the most knowledgeable of the sources cited was an "employee" who lived in Cairo, and therefore somehow lacks credibility). I will cite every example that I can find that is at all relevant.

Casey claims that by stating that Hitchens is obviously not a racist I was saying that he is a racist, disguising my intent by the fanciful means he suggests. By precisely the same logic, I was saying that Hitchens really did believe that everything written by the nefarious Chomsky-Zinn-Finkelstein alliance was directed to him personally and no one else; and I am now saying that Casey really does believe that Clinton's bombing of the Sudan was a "horrendous crime" committed with "wickedness and awesome cruelty, etc., which he claims -- but obviously does not believe -- is "morally equivalent" to an unadorned statement of fact. Etc. Plainly, we may disregard all of this.

Casey claims that I proclaimed that Jonathan Belke "must be right" in his estimate that within a year tens of thousands had "suffered and died" as a result of the atrocity that Casey is laboring so hard to deny. As he knows, from the outset I insisted on the precise opposite: that that the numbers are not known and that all estimates must therefore be speculative. It is quite possible that the estimate for the first year by the most knowledgeable of those cited is too low, as is suggested by other evidence that I have summarized elsewhere. We may dismiss this as well.

Casey triumphantly observes that there are different versions of the "quick reaction" I sent to journalists, in response to their queries, in the first days. Absolutely true, for one reason, because the questions posed were different. Thus the first response does not include the long final paragraph on ways to respond that is included in all the others. Furthermore, in response to queries from honest readers, I changed "killed" to "caused the death," the obvious meaning. And in response to others who noted a contradiction between my statement that deaths in the Sudan were unknown and were greater than 6000, I changed "do not reach the level" to "may not reach the level" (a significant understatement, according to the evidence available, which I partially reviewed). That's it.

Casey also claims that I was so embarrassed by this statement that I excluded it from composite interviews later posted. One minute of research would have revealed to him that I had no hand at all in the composite interviews, put together by Michael Albert from many long and detailed interviews in national media around the world, excluding all short responses, including this one. And two minutes of inquiry would have revealed to him that in some of these later interviews, broadcast and posted weeks ago, I went into the effects of the Sudan bombing in much more detail. And maybe three minutes would have revealed that I have mentioned the crime repeatedly in earlier years, in the hope of eliciting some concern about it and interest in doing something constructive, as I've done with regard to many other cases of severe consequences of crimes for which we share responsibility and could mitigate if we chose, the continuing killing of innocents in Laos and Vietnam, for example.

And a few weeks wait will reveal to Casey that in a short book to appear compiled from many interviews (9-11, Seven Stories press), there is considerably more discussion and additional relevant evidence, included for two reasons: one, because although this is a very minor illustration of the crimes for which Casey shares responsibility, nevertheless it had very severe human consequences; and two, because of the hysterical reaction from Casey and a few others when the plain, elementary, easily available facts are presented, which provides us with some insight into certain elements of the society -- marginal, fortunately.

The rest is hopelessly irrelevant to anything I wrote or said, so I will ignore it. If serious readers feel that I have overlooked something that is relevant, I'll be glad to consider it.

I will add only one comment, which, although a truism, is perhaps worth noting, since some, at least, do not seem to comprehend it. To begin with, if we are even minimally serious, we apply to ourselves the standards we rightly apply to others: more precisely, harsher standards, because it is our actions for which we are responsible and that we can modify. In the case of official enemies who have committed crimes, we count not only those who they personally murdered, but those who died as a consequence of their acts.

To move from abstract to concrete, consider the crimes of Communism in the 20th century. These have received enormous publicity, reaching a peak with the publication of the "Black Book" in France and then in the US, with major reviews in early 2000 expressing amazement and horror at the depths to which humans can descend. The centerpiece of the accusation was the Chinese famine of 1958-61, which accounted for 1/3 of the grim total. Of course, no one supposed that Mao literally murdered tens of millions of people, or that he "intended" that any die at all.

Rather, these crimes were the outcome of institutional and ideological structures of the Maoist system, as discussed in the primary scholarly work on the topic by Nobel laureate Amartya Sen and his colleague Jean Dreze. These charges are unchallenged, and rightly so. I will not elaborate because I have done so elsewhere in a ZNet commentary in January 2000, reprinted and extended in _Rogue States_.

It is taken for granted, rightly of course, that the crimes are not mitigated by the obvious lack of intent. These are crimes that flow from deep-seated institutional and ideological structures, like the bombing of the Sudan, and innumerable more severe cases. Nor would the worst of the crimes of Communism be mitigated in the slightest if it were discovered that something in Mao's personal life might have had some role in the orders that led to the crime (as is speculated, dubiously in my view, with regard to this minor crime of the Clinton administration).

If anyone were to argue, in extenuation, that Mao did not personally kill or intend to kill the victims, or that the crime that is the centerpiece of the indictment of Communism is mitigated by the fact that it was a failure of information (as Sen and Dreze argue) or had to do with something in Mao's personal life, they would be dismissed with contempt as apologists for atrocities. And if these apologists actually shared the responsibility for the crimes, as Casey does in the present case, the judgment would be far harsher, and rightly.

I will not insult the intelligence of readers by spelling out the conclusions that follow at once for the case at hand.