The Boys Lacked In Basics

The trapping was below par and there was no definite plan for the forwards and midfielders. India were actually looking more to contain than score. 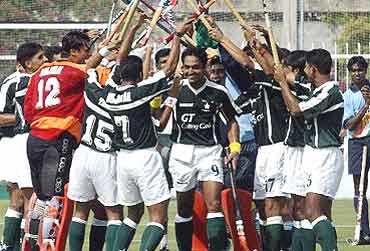 The series is now lost after India's defeat in Amritsar. But our players cannot afford to lose heart for the simple reason that there is still one more match to go.

In international hockey, every single game counts, not because of statistics but for the morale of the players involved in it. For that reason alone, Indian players need to regroup themselves and get down to the task in Hyderabad for the last game.

By now, we all know that this team is full of youngsters, many of whom are likely to do duty for the Indian junior side in the World Cup next year in Rotterdam. Maybe that is what the boys need to focus on and think about.

For the present, the weaknesses are there for all to see. The basics seem to have vanished suddenly. The trapping was below par and there was no definite plan for the forwards and midfielders.

For Pakistan, there were two fine goals by Sohail Abbas and Rehan Butt and the former has now put his name in the record books with 268 goals, moving ahead of previous world record holder Paul Litjens. I can tell you beating Litjens' record is indeed an honour and Sohail Abbas deserves it.

Though the series has been rather low-key from the start, the Pakistanis have looked far more resilient and determined for a win.

On the other hand, the Indians have been rather low on morale. One would have thought that playing at home would bring out the best in them, but it was not to be. With injuries and absence of key players, India were actually looking more to contain than score.

Also, the boys were just not on target even when they did get close. They lacked consistency and apart from the game in Quetta, which they won, the Indians have played well only in patches.

I am almost repetitive when I talk about penalty corners. Our players need to realise that with each passing day, the set-pieces are becoming more and more important. Wasting so many and often without being able to stop the ball, is not acceptable. They have been paying very heavily for this lapse.

In the Amritsar match, the Indians defended well in the initial stages as Viren Rasquinha was well supported by a withdrawn Sandeep Michael and Prabodh Tirkey, with the latter having a good match.

Still Pakistan managed to move ahead in the eighth minute, which was a memorable moment for Sohail Abbas, as he got his record with his trademark shot -- the drag flick.

However, there was drama before Abbas got his record. The two umpires spoke to each other, before deciding that the ball had indeed gone through the net. Pakistan could well experiment a bit in the final match, while India will try and salvage some prestige at Hyderabad.

Rehan Butt, Ghazanfar Ali and Shakeel Abbasi combined beautifully and Butt got them the second goal in second half.

India did manage to get one in, when they earned a stroke after Ignace Tirkey was checked unfairly. Arjun Halappa converted the stroke. But it did not change India's luck much, as they went on to miss some chances towards the end.

Finally, one word for the crowd. They thronged the Guru Nanak Dev University ground. With a full stadium and large numbers outside it and others watching the action on television, I must say there is still a lot of interest in the game, even though many critics might feel cricket is eroding hockey's popularity.

All that our boys need to do now is win some more matches and trophies. That is easier said than done, but I must say with confidence that Indian hockey does have the talent. We only need to harness it well.