The Australians came to South Africa as the team to beat. They leave undefeated, with a record of 17 straight wins and two straight World Cup titles. 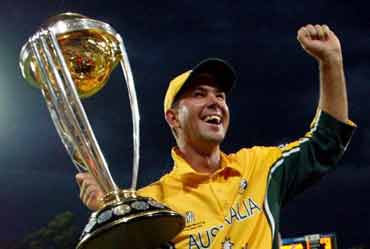 The Australians came to South Africa as the team to beat. They leave undefeated, with a record of 17 straight wins and two straight World Cup titles. This team has a strong will to win, no matter what, and this World Cup did throw them some stiff challenges. There was the Shane Warne controversy, the innumerable injuries and three games at a venue, Port Elizabeth that just did not suit them. However, they are the side that had the best depth in batting and the most variety and aggression in bowling, and without doubt they were the best all-round team and that's why they came through.

The debate on whether Saurav Ganguly did the right thing by putting the Australians in to bat will go on for many months in India. I would back the Indian captain on this one. There had been overnight rain and there was sideways movement for the bowlers. Unfortunately the seamers who had served Ganguly so well right through the tournament, were wanting on the
day of the finals.

The occasion got to Zaheer and Nehra, but I was disappointed to see an old warhorse like Javagal Srinath also lose nerve. The Indians bowled on both sides of the wicket, dished out no-balls and wides regularly and the first over in which Zaheer went for 14, set the tone for the Australian innings. Even at the death, the bowlers struggled to get in a decent yorker, and bowled far too many boundary-balls and full tosses. Having said that, I would not take anything away from the Australian batsmen.

The 100-run partnership between the openers was almost predictable since they had not fired too often in the tournament. Adam Gilchrist was brilliant because he saw his team through a period when there was some assistance for the bowlers. He batted aggressively and laid a superb platform for Ricky Ponting and Damien Martyn to build upon.

Damien was playing with a broken finger, but was the one to take the initiative early in the partnership. He played a controlled innings and was a superb foil to Ponting. For the captain, it was a defining moment. A 140 in a finals is always special, and it was an innings that had marvelous strokes and great running between the wickets. The partnership was great, but to think it came in a World Cup final makes it more special.

There must be great disappointment at the way Sachin Tendulkar got out in the first over of the run chase. Sachin is only human and it's difficult to bat staring at a target of 360. However, I think he would have been better served if he had stuck to his natural game. I was a bit surprised to see him play such an uncharacteristic stroke so early in the innings. But as I said, he is human and these things can happen in cricket. This does not make him a lesser player, and his contribution in this World Cup remains pretty special. The Indians must remember that if he had not fired in all those matches in the early part of the tournament, they may not have got so far with so much ease.

The other batsmen seemed to be out of depth chasing that kind of a target in the absence of their batting mainstay. Sourav Ganguly once again proved that he does not relish playing quality fast bowling. His record against us has always been poor, since he averages only around 20. Virender Sehwag did not impress me either. He was very scratchy and very lucky to reach 80-something.

Finally, the target coupled with some steady bowling saw the Australians win with consummate ease. The Indians have competed well and were the second best team on show. They have some young players who can kick on to greater things. The only problem was that their over-dependence on Tendulkar did resurface every now and then, but that will change as the new order slowly finds its feet.

The fans need not be disappointed since their team has not let them down. They played well, competed well and can return home with their head held high.