'That Remark Was Never Made'

After his "withering condemnation of the excessive conduct" of the Australian team earns him all-round praise, the Indian captain reiterates, "whatever people believe the word was said, he [Harbhajan] didn't say it." 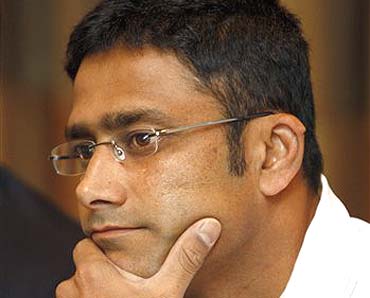 Everyone loves Anil Kumble. If BCCI vice president Rajiv Shukla said that he "has been wonderful as captain and presented himself in a very dignified manner in Sydney, " it was because the Indian captain has been very restrained in the face of extreme provocation. After his team lost the bitter Sydney Test, Kumble rued that only one team played the match in the true spirit of the game.

Peter Roebuck, arguably the best cricket writer of his generation, has said that Kumble's condemnation of the Australian behaviour would be etched in history. "Throughout, Anil Kumble's strongest point has been his withering condemnation of the excessive conduct (of the Australian team)...His words were carefully chosen and given an historical context," said Roebuck. "Beyond question, Kumble's words will have a lasting effect on the way the game is played. Everything needs to be seen in that light," Roebuck said.

Meanwhile, the man himself has spoken: "I think it's important to move on," as his team literally moved on from Sydney where it had stayed put, following the storm, to Canberra, the Australian capital for a three-day game ahead of the third Test beginning in Perth from January 16.

Looking back at the two days spent in Sydney, Kumble admitted it tested his side's patience.

"It's been tough, very difficult, because it's a very serious issue. The entire team is together in this. Board is backing us fully, we are all with Bhajji, it's not easy but he seems to be in a good mood," he said.

Kumble also revealed that he had requested Ricky Ponting to withdraw the "racist abuse" charge against Harbhajan Singh but his plea was not taken too seriously by the Australian skipper, who was perhaps unmindful of its implications.

"I did make a request to Ponting, if it could be sorted out before it went up to the match referee. But he said a report had already been made," the Indian skipper said.

"Having played cricket for this long, I knew such allegations could spiral into something bigger, I envisaged it could become a larger issue," Kumble said, reflecting on the issue which still has the potential to disrupt the tour.

"The focus for us is to ensure that we get the best possible out of this game" he said after arriving here for a three-day practice match against ACT XI starting tomorrow.

Kumble also did not commit himself on whether the captains' agreement, to go by the fielder's word on close catches, before the start of the tour would remain in practice for the rest of the series.

He also refrained from commenting on his team's stance on the charge they have pressed against Australian spinner Brad Hogg, saying, "we would wait for the hearing and then let you know."

Kumble reiterated that Harbhajan had never used the word for which he was accused and punished by match referee Mike Procter last week.

"It is a serious charge. From what we gathered from our teammates, the two people who were in the middle, that remark was never made," he asserted. "Whatever people believe the word was said, he didn't say it," he added.

The Indian skipper said his side wants to put the controversy behind and move on with the tour. "It's nice to be playing cricket again. I look forward to this game (three-day Canberra game). It's important to move on", he added.

"Hopefully, whatever happens to the appeal, we would get the right decision," Kumble said. Looking back at the two days spent in Sydney, Kumble admitted it tested his side's patience.

"It's been tough, very difficult, because it's a very serious issue. The entire team is together in this. Board is backing us fully, we are all with Bhajji, its not easy but he seems to be in a good mood," he said.

On the third Test, Kumble wanted his team to make good use of the three-day practice game and sort out a few niggling positions in the composition of the side.

"We need to be on top of our games to beat Australia. We have done that in patches in this series, we had a chance to draw the Sydney game, it didn't happen," he said.

"I am sure there will be moments in Perth where we need to seize those opportunities," he signed off.