Is Maharashtra's Home Minister declaring another Emergency of his own during this pre-election period? Will champions of civil liberties remain articulately silent and silently articulate in the face of this clear and present danger to democracy itse 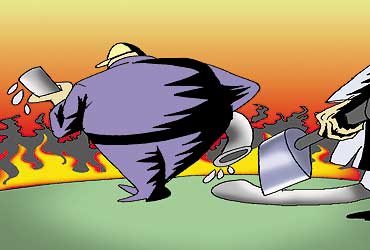 The front page of the Pune City Edition of the Marathi daily newspaper Sakal (23 March) had the shocking news today that the Home Minister of Maharashtra, R. R. Patil has "ordered the Commissioner of Police, Pune to investigate the persons at the Bhandarkar Oriental Research Institute responsible for supplying malicious information on ‘Jijau’ (Shivaji’s mother) to James W. Laine, so that the State can take appropriate action against them."

[It is interesting to note the different focus in reportage in this Marathi newspaper as compared to the various English publications, or even the PTI feeds, where the reportage is confined to the Maharashtra government's threat to enlist Interpol's help for arresting James Laine - Ed, outlookindia.com]

This ridiculous-sounding statement was made by Home Minister Patil at a press conference in Mumbai on March 22. The Home Minister has helped to camouflage the extremely serious criminal assault on the B.O.R.I. on January 5 -- that was no ordinary conspiracy or act of dacoity -- into what Marathi newspapers are now referring to as ‘The James Laine issue’!

While James W. Laine’s book has already been banned and a police case against the author and his publishers has been filed in Pune, the Special Branch of the Maharashtra Police has not yet shown any interest in tracing and investigating the persons, organizations, and political parties that have instigated the assaulters. This has been treated as a case of ‘hurt sentiments’ though it is in all probability a case of pre-calculated incitement of uninformed public opinion for the sake of electoral and other gains, or for ‘recognition of extra-constitutional clout’.

It is significant that the Home Minister and his own party -- the N.C.P.-- have tried indirectly to justify the ‘Sambhaji Brigade’ and the ‘Chhava Sanghatna’ who attempted to disrupt the Prime Minister’s election campaign meeting in Beed, raising slogans about the Laine book. The Prime Minister too obliged by retracing his steps from an earlier liberal stance in the matter of censorship.

While neither James W. Laine nor the hero of his book, Chatrapati Shivaji Maharaj, have any conceivable role to play in the 14th Lok Sabha polls, the Constitution of the Secular Democratic Republic of India is itself under attack from domestic terrorists and their political clients. Would Chatrapati Shivaji Maharaj, were he to reappear in the 21st century, make caste-wars the foundation of his Svaraj?

Is Maharashtra’s Home Minister declaring another Emergency of his own during this pre-election period? Will the Election Commission ignore this on technical grounds? Will the Union Government find it politically embarrassing to act appropriately and bring to book those who engineered and carried out the attack on BORI? Will champions of civil liberties remain articulately silent and silently articulate in the face of this clear and present danger to democracy itself?

Dilip Chitre is Honorary Editor New Quest - a quarterly journal of participative inquiry into society and culture - and this piece appears in New Quest Number 155 (January-March 2004) focussing on "the rise of neo-Fascism in India".