For all the innovations they promote with change of times, Indian puppetries shouldn’t suffer from flat electric lighting. After all, old-world charm is integral to these forms. 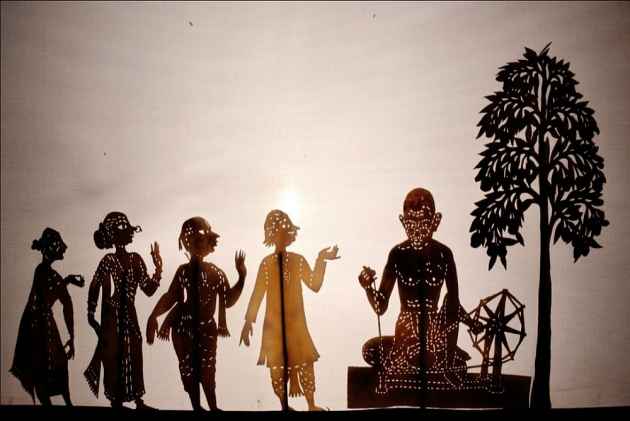 There is tension in the air going by the storyline, but what its depiction largely brings to the viewer is fun, which is anyway integral to the aesthetics of puppetry. Traditional shadow play in India, like anywhere in the world, is primarily recreation; so pathos is a misnomer in this art with a history of more than two millennia.

Well, it’s a Ramayana plot that is in progress on the screen, behind which marionettes with ornate perforations move to the accompaniment of dialogues backed by ethnic music and percussion. Rama and Lakshmana are out in the forest, searching frantically for Sita, the heroine of the epic, who has suddenly disappeared from the hut where the brothers were living during their 14-year exile.

It’s an intense scene from Ravana Chhaya. This traditional form is from the country’s eastern part, just north of the peninsula. That is present-day Odisha, with the state’s north-central Angul district being its hub. Odash village in Pal Lahara subdivision peoples Ravana Chhaya artistes, who are largely from the subaltern Bhata community that is believed to migrated from the coastal pilgrim town of Puri centuries ago.

Now, Ravana Chhaya is the one that is believed to have undergone immense revolutionary changes among the four of India’s major traditional shadow puppetries. For, it, like the classical dance Odissi, underwent a near-break in the middle of the last century—for want of patronage. By the mid-1950s, the form showed signs of reappearance by it took a couple of more decades for Ravana Chhaya to emerge again on the country’s culture-scape. By then, not much of what existed before the interval was clear (owing to nil documentation).

This chasm is perhaps what is lending Ravana Chhaya a non-ancient appearance today despite all its ingredients being basically rooted in local aesthetics. The literature is from Bichitra Ramayana penned by early 18th-century Oriya poet Biswanath Khuntia, the vocals bear the belt’s lilting quality sans frills, the percussion background comes from the local khanjani and daskathi besides the cymbals. Yet, they are an apparent mismatch with the visuals brimming with its slender puppets. And this sad phenomenon is noticeable not just with Ravana Chhaya but across its counterparts in the Deccan.

Why is it so? This has much to do with the lighting. It’s milk-white hue bordering on bluish. True, the primordial lamps may not be a viable option in venues that are non-conventional or urban. Electric light is, needless to say, easier to give the moving images the necessary glint. Only that the colour of the beam of rays falling on the white cotton cloth doesn’t seem to go well with the general aesthetic of a vintage visual art.

It doesn’t require any insight about ancient Indian puppetry to sense that they are best suited to mellowed brightness suffused in the shades of yellow and orange. That is the colour of the fire. Or that emerging from the wicks that draw oil to glow. After all, earthen lamps were (and are) the providers of radiance for the leather puppets with a translucent texture typical of aptly-treated animal hide. (Ideally, Ravana Chhaya puppets, for instance, are made of deer skin.)  Their lustre has an amber-like quality, which should not be missing when the screen has its glows from electric bulbs. Flat lighting certain drains away the key part of beauty in such shows, where the puppets mounted on slender bamboo poles travel diagonally across a small and narrow stretch between the light-emitting objects and the cloth that doubles as the screen. It will be always great to see the images lit up with oil lamps!

In cities, towns or even in villages today, Thomas Alva Edison’s 19th-century invention may come in more handy than what the puppeteers’ ancestors found in flickering diyas that used to fetch the screen its essential glimmer. The new-age practitioners of this rustic are perfectly justified in using bulbs—so long as the shade of the light falls in congruence with the broader taste of the art.

It isn’t just the Ravana Chhaya that has of late been subject to a loss of visual richness. Reckless electric lighting has cast its inorganic scars across similar puppetries such as Tolu Bomalatta of Andhra Pradesh, Togalu Gombeyatta of Karnataka and Tholpavakoothu of Kerala. The pressures of contemporary lifestyle occasionally lead to daytime shows of these forms in open-air venues, where lighting gains even weirder expressions during presentations before cosmopolitan gatherings.

Be it Sundara Kanda of Tolu Bommalatta whose audio emerges from high-pitched rendition of Carnatic ragas propped by the harmonium and mridangam, or a Togalu Gombeyatta troupe from Bangalore performing a more contemporary story based on Mahatma Gandhi, or Palakkad’s Pulavar families rendering Kamba Ramayana in Tholpavakoothu style to the beats of Kerala drums like chenda and maddalam, the visuals should effuse an old-world charm typical of their art.

To ensure this, the artistes can themselves suggest to the organisers the specifics about the lights. They can either carry the suitable bulbs or brief in advance about their necessary characteristics. In a world where India’s branches of puppetry keeps getting exposed to other parts of the globe where they have or don’t have such traditional arts, it is essential to realise that jazzy glitter only subtracts the charm of the form, perhaps even to the distraction of audiences.