Sushma, Nirmala To Host US Counterparts In Delhi For '2+2' Talks 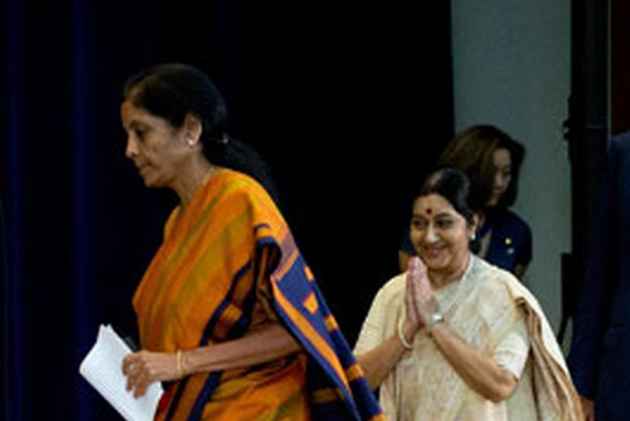 At the '2+2' dialogue in New Delhi on September 6, India and the United States will discuss a broad range of bilateral, regional and global issues, the Ministry of External Affairs said on Friday.

The announcement of the date for the much-delayed talks under the new format was made in Washington and New Delhi.

The dialogue was earlier scheduled for July 6 in Washington, but was postponed by the US as Secretary of State Michael R Pompeo had to travel to North Korea.

"The 2+2 meeting will cover a broad range of bilateral, regional and global issues of shared interest, with a view to strengthening strategic and security ties between the two countries," MEA spokesperson Raveesh Kumar said, announcing the date for the talks.

Under the '2+2' format, External Affairs Minister Sushma Swaraj and Defence Minister Nirmala Sitharaman will hold talks with their US counterparts Pompeo and Mattis.

Last month, US Ambassador to the UN Nikki Haley said the Indo-US relationship will mark a new milestone when the two countries conduct the first ever '2+2' dialogue.

The two countries tried to schedule the dialogue many times with several dates having been considered.

Earlier this year as well, the '2+2 dialogue' was postponed due to uncertainty over the confirmation of Pompeo as President Donald Trump's new Secretary of State. Pompeo was later confirmed as Secretary of State in April.

The dialogue was seen as a vehicle to elevate the strategic relationship between the two countries.

The two sides are expected to discuss ways to ramp up cooperation in the Indo-Pacific region where China has been increasing its presence.

India is also likely to raise the issue of impact of Trump administration's sanctions against Russia on India. India is finalising procurement S-400 Triumf air defence missile deal with Russia.

There has been mounting concerns in India over the US sanctions against Russian defence majors including Rosoboronexport as billions of dollars of military purchases may be impacted because of the punitive measure.

The US had announced sanctions against Russia under the stringent law for its alleged meddling in the American presidential election in 2016.

The CAATSA mandates the Donald Trump administration to punish entities engaging in significant transaction with the defence or intelligence establishment of Russia.

The two sides are also likely to discuss regional security situation including in Afghanistan, besides ways to deepen defence and security cooperation between the two countries.