A red cricket ball flying over the boundary instead of shells going over the India-Pakistan border in Kashmir will have millions of TV viewers enthralled. How it came about is an instructive story in a turbulent world. 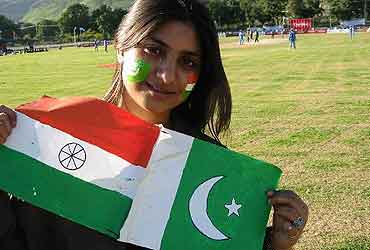 Worries about a nuclear war between India and Pakistan may seem like a nightmare next week when Indian and Pakistani cricket teams take to the green to play a series of matches. A red cricket ball flying over the boundary instead of shells going over the India-Pakistan border in Kashmir will have millions of TV viewers enthralled. How it came about is an instructive story in a turbulent world.

In the history of the nation-state, frontiers have defined the identity of emerging countries, their exclusive properties helping to cement national identities. Yet in states formed under colonial rule, boundaries often had more to do with politics than with the population's shared characteristics. After the colonizers' departure, many former colonies have struggled with border-related problems.

One example is the grievous error Britain committed when it rushed out of the Indian subcontinent in 1947 and left the border province of Jammu and Kashmir undefined. India and Pakistan have fought modern history's longest war over that dividing line, even as the European powers moved towards the loosening of borders in their own corner of the world.

Europe's leaders realized that only by surrendering some 'sovereign power' could they make the fullest use of resources, manpower and economies of scale. The European Union has since become a model for other supranational coalitions like ASEAN, Mercusor, NAFTA, and the African Union. These coalitions are the continents of the modern age.

In the first week of January, India and Pakistan finally seemed to be moving in a similar direction. At a summit meeting, the seven members of the South Asian Association for Economic Cooperation (SAARC) signed an agreement, previously sabotaged by Indo-Pak intransigence, to make the region a free-trade zone by January 1, 2006. It was, in the words of Indian Prime Minister Atal Behari Vajpayee, a victory of rational economics over political prejudice. Referencing Europe's success, the Prime Minister challenged the two adversaries to progress towards open borders and a common currency. Simultaneously, Vajpayee and Pakistan's President Pervez Musharraf signed a bilateral statement that affirmed each side's commitment to a "constructive dialogue" aimed at ending the Kashmir stalemate. Without such an agreement, the proposed free-trade zone would never have taken off, since SAARC works only as well as India and Pakistan permit. In signing the statement, Musharraf belied his reputation as a hawk. He praised Vajpayee's "vision, commitment and flexibility" and stepped out with him on the slow road to possible prosperity.

Why has the urge for peace descended upon a region synonymous with conflict? Friendship often starts with the perception of a common enemy. America and Britain forged their bonds in the heat of three wars across a hundred years: against German militarism, Nazi fascism and Soviet totalitarianism. India and Pakistan are beginning to see that their worst enemies are not each other, but rather the poverty and terrorism that threaten each government's hold on power. Solving either problem will require fighting both - as long as war and terrorism remain a problem, South Asia will be unable to devote significant resources to the fight against poverty.

All three parties to the Kashmir dispute have publicly stated their willingness to rise above the past. Although a subsequent uproar forced him to retreat the next day, Musharraf went so far as to suggest that Pakistan's demand for a UN-supervised plebiscite in Kashmir had become irrelevant. That uproar quieted when Hurriyat, the political alliance at the forefront of separatism in Indian Kashmir, suggested the same thing in a breakthrough dialogue with the Indian government in January. Hurriyat members also committed themselves to peaceful negotiations. The Indian government, in turn, tacitly admitted that Kashmir was disputed territory by agreeing to a composite dialogue that would have Kashmir on the agenda. Such concessions would have been unthinkable even a year ago.

For half a century, India and Pakistan placed passion above compromise. Now, however, each may be acceding to political reality. Vajpayee, who took the initiative, measured the cost of the Line of Control (the Kashmir division) to both nations and found it was outweighed by the benefits of economic growth and human contact. Softened by a ceasefire, the armies of India and Pakistan encouraged Kashmiris on opposite banks of the Neelum River to reach out to each other during the Muslim festival of Id al Adha on February 1. Already, the two governments have decided to open a direct bus service between the estranged capitals of Srinagar and Muzaffarabad, a proposition that would have been dismissed as fantasy just months ago. And in the second week of March, India and Pakistan will play a series of cricket matches while critical general elections are held in India. Vajpayee believes that peace with Pakistan is an election-winner - just the opposite of what his party believed in the past.

These revolutionary developments can be attributed to changes in the populace. Young people in particular are angry because they view the India-Pakistan conflict as hamstringing South Asia while the rest of the world (visible on television sets) moves towards a better life. Vajpayee knows only peace will allow India to realize its true potential. Fifty years ago India was ahead of China in economic terms; in ten years it could be on par again.

At long last, India and Pakistan have agreed that sectarian terrorism is a common enemy. After September 11, the United States forced Pakistan to take a stand against terrorism and renounce its support of the Taliban in Afghanistan. But this did not signal a complete reversal of Pakistani policy: the government continued to support 'jihadi' elements in Kashmir. Perhaps the December attempts by such groups on Musharraf's life spurred him towards change. Musharraf has now declared a 'jihad' against such 'jihadis'. More importantly, India now believes that Musharraf is sincere.

Undoubtedly, much remains to be done before peace is reached. The January 2006 deadline has to be reached without a policy reversal. But if by some miracle India and Pakistan do cooperate to resolve the Kashmir problem and promote regional economic unity, they could become partners in other endeavors.

After the Iraq conflict, Washington is hoping to re-position NATO as the world’s pre-eminent peacekeeper. But NATO cannot play a larger role without a larger focus. The American ambassador to NATO, R. Nicholas Burns, told this correspondent in Brussels recently that America would like India and Pakistan to become partners in future NATO missions.

An end to the India-Pakistan conflict may also, in the long run, enhance international peace. In the changing map of the world, new coalitions like ASEAN and SAARC can become the guarantors of stability in their regions, just as NATO ensured the security of Western Europe against the Soviet Union. After all, who can ensure peace better in Afghanistan – American and European troops, or an Indo-Pak Rapid Action Force? Moreover, if there is an economic partnership, there will also be the money to pay for common strategic concerns. SAARC could act as an economic and strategic bridge between ASEAN, the Arab world, and Central Asia.

Progress on Kashmir is a good sign. But for the economic and political security of both countries and the region, India and Pakistan must not let their contentious histories re-emerge to eclipse recent gains.