Rafael Nadal overcame Nick Kyrgios' challenge in the Wimbledon in a hot-tempered match, while there will be a new name adorning the trophy as defending champion Angelique Kerber went out in three sets to lucky loser Lauren Davis 2-6 6-2 6-1. 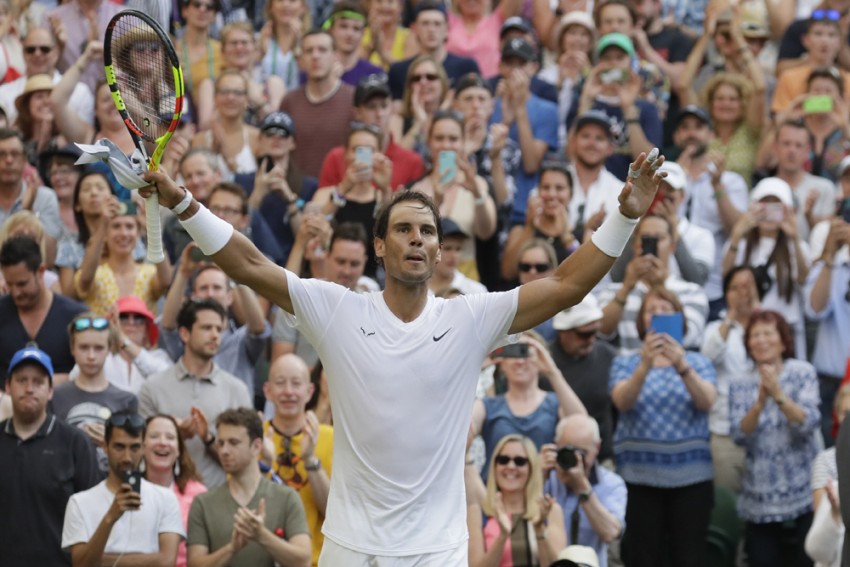 Nadal's pleasure was evident when he sealed the match against a man he had accused of lacking respect for the sport.
AP
PTI 2019-07-05T09:43:45+05:30 Wimbledon: Rafael Nadal Teaches Nick Kyrgios A Lesson, Angelique Kerber Knocked Out 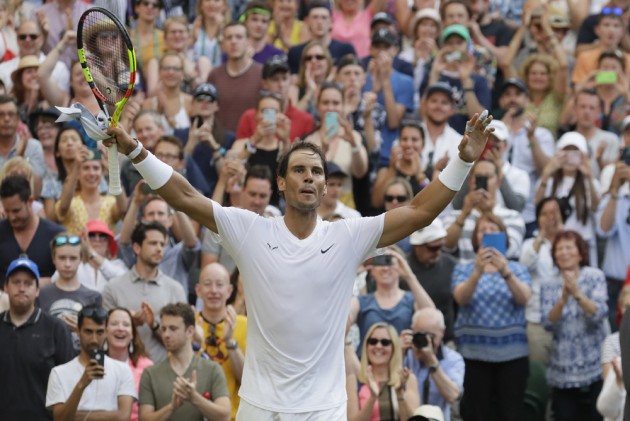 Rafael Nadal may not end up winning a third Wimbledon singles title but he will take joy from having beaten his 'bete noire' Nick Kyrgios in an engrossing but bad-tempered grudge match.

The 33-year-old Spaniard on Thursday came through in four sets 6-3 3-6 7-6 (7/5) 7-6 (7/3) which saw fiery but talented Australian Kyrgios receive a warning for unsportsmanlike behaviour after a running argument with the umpire while twice serving under-arm.

Nadal's pleasure was evident when he sealed the match against a man he had accused of lacking respect for the sport as he fist-pumped and jumped in the air yelling to his camp seated on Centre Court.

"I was aware of everything," said Nadal, who was winning his 50th match at Wimbledon.

"I was just next to him so I don't want to comment on this but potentially he is a Grand Slam winner." Earlier, his great rival, eight-time champion Roger Federer had no such problems as he eased into the third round, beating British wild card Jay Clarke 6-1 7-6 (7/3) 6-2 to equal American legend Jimmy Connors's record of 17 appearances in the last 32.

On the women's side, there will be a new name adorning the trophy as defending champion Angelique Kerber went out in three sets to lucky loser Lauren Davis 2-6 6-2 6-1.

Federer said his game had not been perfect but Clarke had helped his cause.

"I struggled to take care of business a bit from the baseline," said 37-year-old

Federer who has now reached the third round at the Slams for the 70th time.

Federer and Nadal's half of the draw lost two of the potentially more awkward customers in big serving duo John Isner and Marin Cilic.

Ninth-seeded Isner, who played in the epic semi-final last year with Kevin Anderson which lasted over six hours, fell in five sets to unseeded Kazakh Mikhail Kukushkin 6-4 6-7 (3/7) 4-6 6-1 6-4 in just over three hours of play.

Kerber looked in control after the first set but once she went 3-2 down in the second Davis -- ranked outside the top 250 earlier this year -- gained in confidence.

"Its been a tough journey and a process of learning and growing as a player and person," said Davis.

"The drop in ranking has made this win even more fulfilling."

There was a scare for seven-time champion Serena Williams, who dropped the first set against 18-year-old Slovenian qualifier Kaja Juvan before prevailing 2-6 6-2
6-4.

"It brings the best out of me the pressure," said 37-year-old Williams.

"I play best when I am down sometimes. I am a fighter, I never give up."

Ashleigh Barty's bid to become the first woman since Williams in 2015 to win the French Open and Wimbledon in the same year stayed on track with a 6-1 6-3 second round victory over Belgium's Alison van Uytvanck.

Barty, only the second Australian woman after Evonne Goolagong Cawley over 40 years ago to be number one in the world, said the most pleasure she has had in her new status is when she speaks to her niece back in Australia.

"Over and over she tells me you can go to infinity and beyond," sad Barty.

"She's an incredible little girl who gives me so much inspiration."

Barty's next opponent British wild card Harriet Dart, for her part, could not contain her excitement at playing the world number one.

"I have nothing to lose. I actually met her a few weeks ago at an LTA schools visit.

Home fans' appetites were sated at the end of the day when Williams's mixed doubles partner and former world number one Andy Murray made a victorious return after 'life-changing hip surgery'.

The 32-year-old Scotsman and his French partner Pierre-Hugues Herbert gelled as the match went on winning in four sets over Marius Copil and Ugo Humbert, 4-6 6-1
6-4 6-0.