Virender Sehwag is enjoying life as a father-cum-mentor after retiring from international cricket in 2015. He is busy managing his school and entertaining his followers on TV and social media 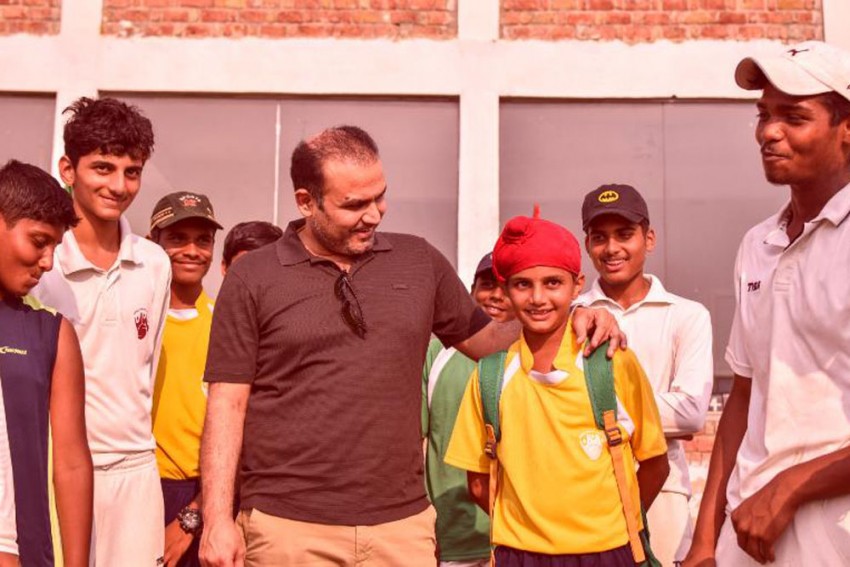 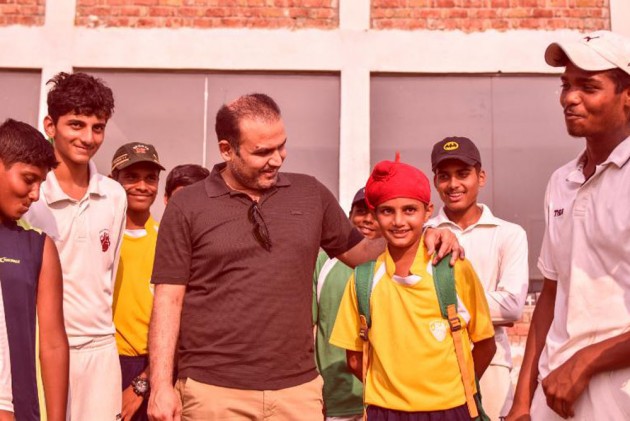 Virender Sehwag always had a sense of timing. Of the 17,253 international runs he scored over 14 years, Sehwag's amazing ability to spank the cricket ball boiled down to some precise coordination between hand and eye. Bred on the relatively grassless and matting pitches of northern India, Sehwag wasn't the 'perfect' batsman who would play in the 'V' and build his innings piece by piece like a Gavaskar or Lara would do. On the contrary, he defied the grammar book almost every time he stepped out to bat, his first scoring shot would invariably screech through point or cover.

After officially mothballing his flannels in 2015 -- although he played his last match for India in March 2013 -- Sehwag's sense of timing remains immaculate. He arrived well ahead of the scheduled appointment after inviting the Outlook team at his international school in Jhajjar, about 35 kilometres from Brigadier Hoshiarpur, the last station on the Green Lone of the Delhi Metro beyond Kirti Nagar, Punjabi Bagh and Bahadurgarh and on the way to Rohtak in Haryana. It's in this school that Sehwag is now living his dreams. The second innings of Sehwag's life revolves around children and that includes his two sons, Aryavir, 12, and nine-year-old, Vedant. And this time, Sehwag, much enlightened after his rollicking journey as a professional cricketer, wants to be the copybook mentor, no false stroke or rush of blood. 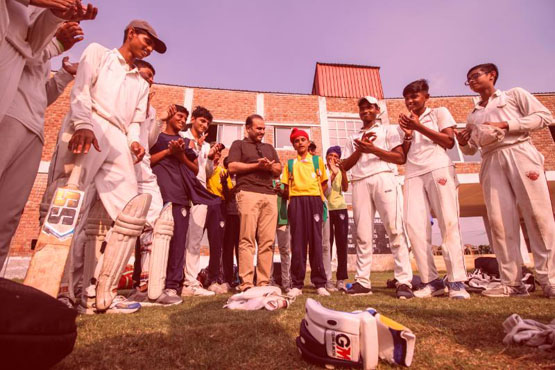 Name and fame have certainly taken him places. The Virender Sehwag International School is a two-hour drive from Chattarpur in south Delhi, where he currently lives with his wife and sons in a sprawling farmhouse. Sporting dark sunglasses and dressed in a smart black T-shirt with matching beige-coloured trouser, Sehwag received us at the school reception. We were about an hour late, Delhi's traffic and the Google Map betrayed us a bit, but Sehwag played the perfect host. A much-in-demand celebrity, luckily he seemed to have all the time for us. The clock was striking 1:30 PM and Sehwag once again demonstrated his sense of timing. "Pehele khana, phir interview (First lunch, then interview)," he said.

STRAIGHT AS AN ARROW

"Cricket has given me everything that I have. When was I trying to break into the Delhi league circuit, I often travelled a couple of hours from Najafgarh, a place where I was born and brought up. Cricket continues to give me my bread and butter and it's time to give back to the society," Sehwag says over lunch, a lovely spread of vegetarian food. "The students eat the same. Good food is must for healthy living. Everything now is adulterated."

During the course of an hour-long conversation, one thing emerged very clearly. Sehwag remains the quintessential clutter free person whose objective in life is all about serving people. "I have always been an entertainer. When I played the game, I tried to entertain the spectators and now I am entertained with my opinion on TV or social media. People always love to hear the truth. You can't be politically correct all the time. When you speak your mind and fans appreciate that, you have done your job."

Having turned 41 on October 20, Sehwag's life has evolved over time. "But I have never let the pace and pressure get the better of me. I loved to control the pace of my game -- he had an amazing strikerate of 145 in T20 internationals and 104 in ODIs -- and now it's relatively very slow. I don't have to attend morning nets," he chuckles.

Sehwag doesn't believe in that "early to bed, early to rise" policy. "Look, I must get my eight hours of sleep...that's absolutely essential for a healthy mind," says Sehwag as he explains the goodness of meditation and physical exercise for "at least an hour a day." His day is typically "16 hours" and starts at around 9 or 10 in the morning.

The concept of health and fitness among current sportspersons has confounded Sehwag. "I find that the batsmen and bowlers are all doing weights. Everyone is lifting weights because they have seen Virat Kohli doing it in Facebook or Twitter. Then there is this challenge and that challenge... the rate at which our young cricketers are getting injured is quite alarming," says Sehwag, who adds that Sourav Ganguly, Sachin Tendulkar, VVS Laxman or Rahul Dravid barely got seriously injured during their long careers. "We also had sessions at the gym with weights but it was all for a specific reason." 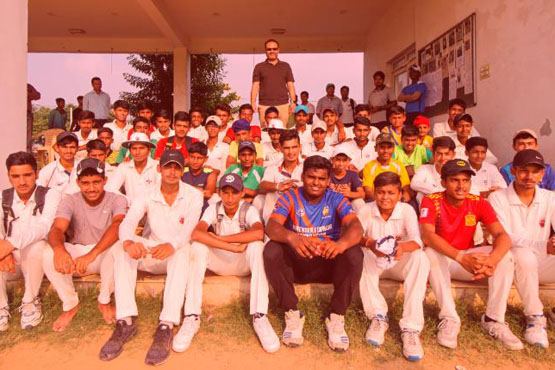 Virender Sehwag's private life is essentially dedicated to the welfare of children both at home and his school or academy. Image Courtesy: Usha Ramesh

Sehwag's 'under-control' waistline reflects his daily regime. "The warm water with honey gives me a sweet start to the day and then there is a good supply of vegetables and milk from my own farm. I can't depend on food from the market. Milawat (adulteration) is killing us. It's bad for the younger generation," he says.

The idea of a residential school came from his father. "'If you become a successful cricketer, build a school where children can study, stay and play' -- my dad's message was clear. We struggled in our early life but now I want to make my father happy. A lot of time goes to the children at my academies and school. If at least one or two of them can make it to the IITs, become a famous doctor or play for India, I would have done some service to the society. I will then happily pass on the baton," said Sehwag.

Time, in a way, is running out on Sehwag and his wife for 15 years, Aarti. "Aryavir is going to be 13 next year and teenagers are not easy to control. We spend as much time as possible with our children. When I was travelling, I missed them a lot. We realise that when the children grow up, they will not spend any time with you. So this is our best time. A good day usually ends with Kaun Banega Crorepati or a movie together," says Sehwag.

Extremely active on social media, Sehwag has over 20 million followers on Twitter and another 14.2 on Facebook but dreads his sons falling prey to the "evils" of the digital world. "Mobile phones only on Sundays and the kids must tell me or my wife what they are watching. This parental guidance is crucial and it's important to discuss everything with your children. Be it sex, movies, sports or the dos and don'ts of life, the lessons must come from parents and not from outside. This frankness between parent and child will make them better individuals and that is what we want them to become. But more importantly, they must understand that being Virender Sehwag's sons don't give them any advantage in life and you shall be punished for any wrongdoing, especially towards women."

Such profound philosophy in the Sehwags perhaps stems from the cricketer's amazing rise from a large and joint Jaat family who were grain merchants. That will and determination were major factors in Sehwag's career still drive the man who commands a massive price for any media assignment. "There is a price for my professional time. Spending time with family is my priority but if you want Sehwag to speak his mind and share his thoughts, you have to pay me," he says matter of factly, reminding that he once did a dengue campaign for the Delhi government for free. 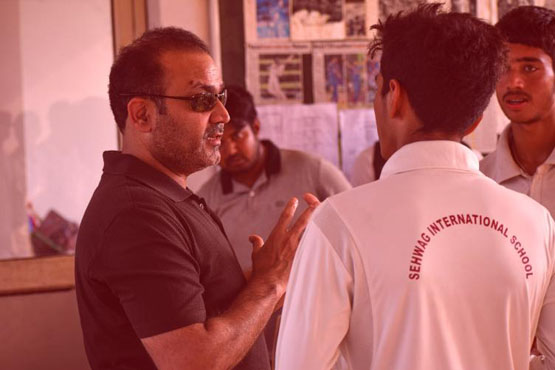 His sons remain the cynosure of his eyes. "I don't want to see another Virender Sehwag in them. They can become a Virat Kohli or a Hardik Pandya or a MS Dhoni. But they don't have to cricketers. They are free to choose their careers and we will help them achieve as far as possible. But the bottomline is to become good human beings. That's non-negotiable."

Sehwag is surely enjoying life after cricket. He cherishes his private life that is essentially dedicated to the welfare of children both at home and his school or academy. "No politics for me. I don't love people hounding me for photos and autographs. I have had my time under the sun and enjoyed every bit of it. They say that after death people remember you very little. So I am living my life every day. With Generation Next."