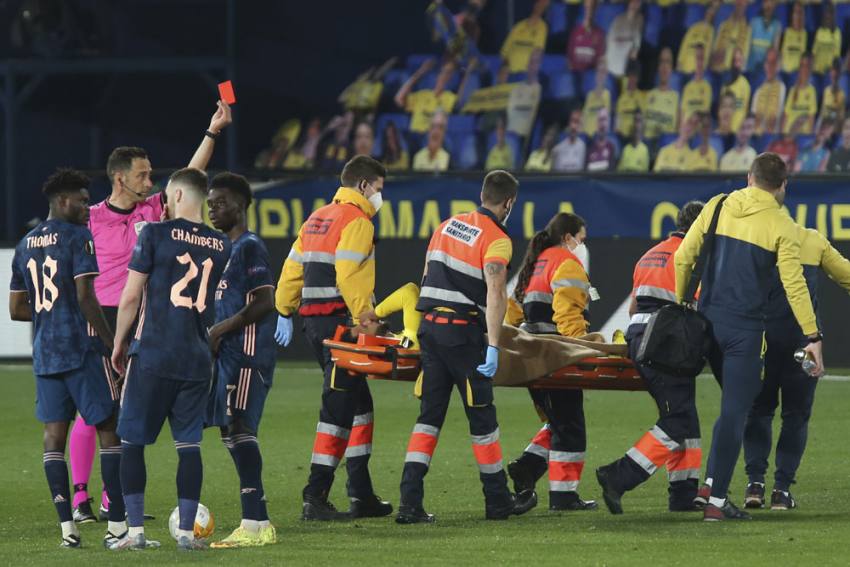 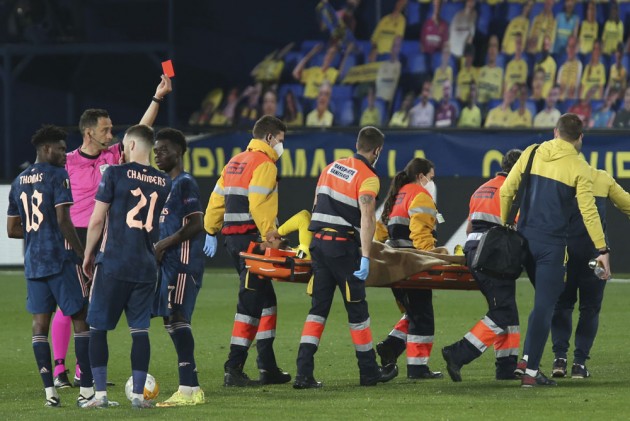 Emery, who was dismissed by the Gunners in November 2019 after a poor run of form, watched on as Villarreal seized control thanks to first-half goals from Manu Trigueros and Raul Albiol.

Dani Ceballos' sending off only appeared to strengthen the hosts' hand, but Nicolas Pepe's spot-kick in the 73rd minute breathed fresh life into a contest that looked in danger of getting away from Mikel Arteta's team.

Former Tottenham midfielder Etienne Capoue then also saw red in a tie that is deliciously poised ahead of next week's return meeting.

10 - Nicolas Pépé has been involved in more Europa League goals than any other player this season (6 goals, 4 assists). Lifeline. #UEL

Villarreal scored with the first effort of the game, Trigueros drilling home after Samuel Chukwueze's jinking run ended with the ball being tackled into his team-mate's path.

Shoddy Arsenal defending saw the lead doubled just prior to the half-hour mark when Gerard Moreno flicked on Dani Parejo's corner for Raul Albiol to volley home from close range.

Juan Foyth was excelling going forward but encountered problems against Pepe defensively and only a VAR check for handball in the build-up saved the defender from a penalty call going against him for a trip in the area.

Arsenal started the second half on the front foot but their outing worsened when Ceballos, already on a yellow card, was dismissed for a late challenge on Parejo.

Bernd Leno was called into action to deny the excellent Moreno and that moment proved even more pivotal when Trigueros clumsily tripped Bukayo Saka, Pepe's penalty sent down the middle and just past Geronimo Rulli.

There was even more room for optimism when Capoue hacked down Saka and was dismissed while leaving the field on a stretcher, but Villarreal clung on for a precious win despite returning captain Pierre-Emerick Aubameyang testing Rulli deep into added time.

What does it mean? Gunners need to stop Emery the Europa master

In the build-up to the game, Emery insisted "I only have gratitude for having worked there" when recalling his time at Arsenal, but this one will have meant a lot to the amiable Spaniard.

Emery really loves this competition; this is his sixth semi-final and he has progressed from each of the last four, winning the final three times in a row with Sevilla and losing out to Chelsea with the Gunners in 2019.

Pepe's penalty certainly means this one is far from done and with Arsenal 10th in the Premier League, their season - and hopes of playing European football next term - rest on the return tie.

With Alexandre Lacazette still injured and Aubameyang only available as a second-half sub having been suffering from malaria, the Gunners were lacking bite.

Indeed, up until Pepe's penalty they had not mustered a shot on target. The scorer has now been involved in more Europa League goals than any other player this term (six goals, four assists).

While he did not score on this occasion, Moreno has been a crucial figure in Villarreal's run to the last four.

The forward had five shots (two of which were on target) and an assist. He has either scored or assisted in his seven Europa League starts this season.

- This was just the second time in their 10 European semi-finals that Arsenal have lost the first leg, also doing so in the 2008-09 Champions League against Manchester United (when they were eliminated).
- Villarreal have progressed from 15 of their 16 two-legged ties in major European competitions when winning the first leg – the only exception was in the 2015-16 UEFA Europa League semi-final, when they went out to Liverpool despite winning the opening game.
- Arsenal have been shown 10 red cards in all competitions under Arteta, twice as many as any other Premier League side in the period since he took over in December 2019.
- This was the first time a former Arsenal manager has beaten the Gunners since George Graham's Tottenham side won 2-1 at White Hart Lane in a Premier League encounter in November 1999.
- Ceballos was shown his first red card in all competitions for a team playing in the top five European leagues (201st game).

Arsenal have a trip to Newcastle United on Sunday prior to the return tie this time next week. Villarreal face Getafe before that clash.