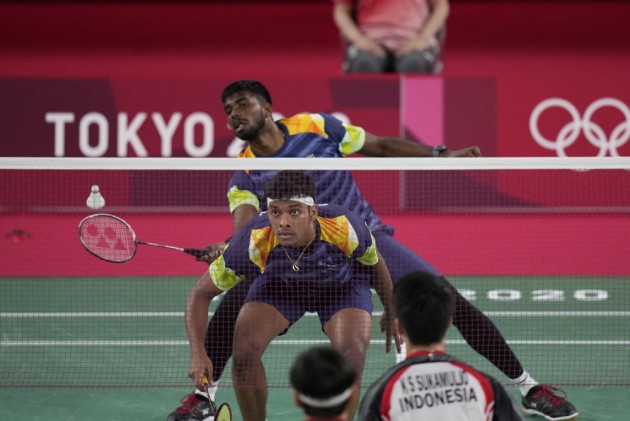 The Indian men's doubles pair of Satwiksairaj Rankireddy and Chirag Shetty suffered a straight-game loss to world number one Marcus Gideon Fernaldi and Kevin Sanjaya Sukamuljo of Indonesia in their second Group A match at the Olympics on Monday.

The world number 10 Indian duo could never get into any kind of rhythm and lost 13-21 12-21 in 32 minutes against the top seeded team. It was their ninth defeat to the Indonesian pair in as many meetings.

Sukamuljo and Gideon are now at the top of the group, while Satwik and Chirag are on the second spot. The Indians will look to beat England's Ben Lane and Sean Vendy, who had also suffered a defeat against the famed Indonesians.

World number three Chinese Taipei pair of Lee Yang and Wang Chi-Lin, the fourth team in Group A, also notched up a win against the English duo earlier in the day to stay in contention.

The match started with short rallies with both the parties moving neck and neck till 6-6. The Indonesians then reeled off five straight points to enter the break with four advantage points.

Sukamuljo was simply sensational in front of the court, using his high racquet speed to perfection.

At 9-13, Chirag took a medical timeout after he seemed to have hurt his toe.

After the resumption, the Indonesian pair continued to dominate the proceedings and grabbed eight game points and converted in the second attempt to take a 1-0 lead.

The Indians seemed to have worked out a strategy early in the second game to lead 6-3, but the Indonesian combo turned it around soon to lead 9-7 with four straight points, riding on a series of superb serves.

Sukamuljo and Gideon entered the break with a three-point lead after the former sent the shuttle to Satwik's body. The duo forced the Indians into committing errors and move to 15-10.

It was a one-way traffic mostly as the Indonesian duo stepped up the intensity to move to 18-10.

A net error gave Indonesia eight match points and they sealed it when Chirag went to the net.

Satwik and Chirag shocked the world number three pair of Yang Lee and Chi-Lin Wang of Chinese Taipei in their opening match in Group A on Saturday.

However, B Sai Praneeth had lost his opening match to Misha Zilberman of Israel in the men's singles.