Tokyo Olympics: Megan Rapinoe Converts As US Get Past Netherlands On Penalties

The United States will next face Canada, which advanced to the semifinals 4-3 on penalties after a scoreless draw with Brazil in Rifu. 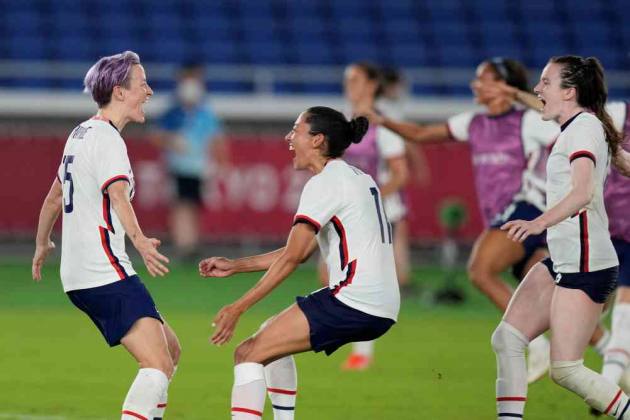 Megan Rapinoe converted the deciding penalty in a shootout and the United States advanced to the semifinals of the women's Olympic football tournament 4-2 following a 2-2 draw with the Netherlands on Friday. (More Football News)

United States goalkeeper Alyssa Naeher stopped Vivianne Meidema's opening attempt in the shootout. She then saved a shot from Aniek Nouwen before Rapinoe put her penalty away.

After Rapinoe scored, she turned to her teammates, folded her arms and grinned in triumph.

Meidema scored a pair of goals in regulation time for the Netherlands, giving her 10 goals for the tournament — an Olympic record.

Miedema put the Netherlands ahead in the 18th minute but the Americans equalized when Sam Mewis headed in a goal off a feed from Lynn Williams in the 28th. Williams then gave the Americans the lead in the 31st.

The United States will next face Canada, which advanced to the semifinals 4-3 on penalties after a scoreless draw with Brazil in Rifu. (AP)