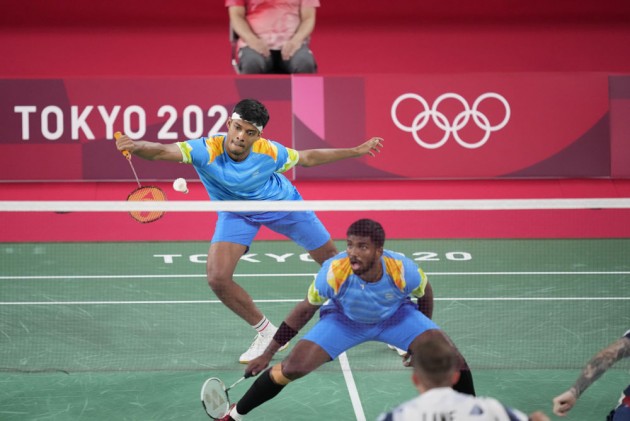 Indian shuttlers Chirag Shetty and Satwiksairaj Rankireddy emerged victorious against the England pair of Ben Lane and Sean Vendy in their final Group A match but still missed out on qualifying for the quarterfinals at the Tokyo Olympics on Tuesday.

However, they couldn't make it to the knockout stage as they finished third in the Group A behind top-ranked Indonesian team of Marcus Gideon Fernaldi and Kevin Sanjaya Sukamuljo and world number three Yang Lee and Chi-Lin Wang of Chinese Taipei.

All three teams finished on same points with two wins each and when the number of games won was considered to identify the qualifiers, the Indians lost.

Chirag and Satwik's straight game loss to the Indonesians on Monday cost them dear.

Moments before the Indian pair stepped on the court, Lee and Wang had completed a three-game win over Sukamuljo and Gideon in the preceding group match, rendering the result of India's contest against Britain inconsequential.

Only the top two pairs of each group advance to the quarterfinals.

In London Olympics, Ashwini Ponnappa and Jwala Gutta too had endured a similar fate when they bowed out after the points won and lost were considered after they tied with the other two pairs in the group stage.

The Indian duo looked in good rhythm. They opened up a narrow 5-3 lead but the English pair came soon moved ahead 11-10 at the break.

Chirag and Satwik slowly started to dominate the proceedings and eventually grabbed the opening game when Lane hit wide.

They again marched to a 6-3 lead in the second game and ensured they have a two-point advantage at the interval.

The Indian duo kept its nose ahead at 16-13, riding on the errors of their opponents.

The English pair scripted a mini comeback, drawing parity at 18-18 and also took a lead after Satwik netted a return of serve.

The Indians, however, were alert as they grabbed the match point and converted it with ease to end their campaign on a high.