The shooter also felt that someone in the Haryana government has been playing "games" with the money that was to be awarded to the medallists. 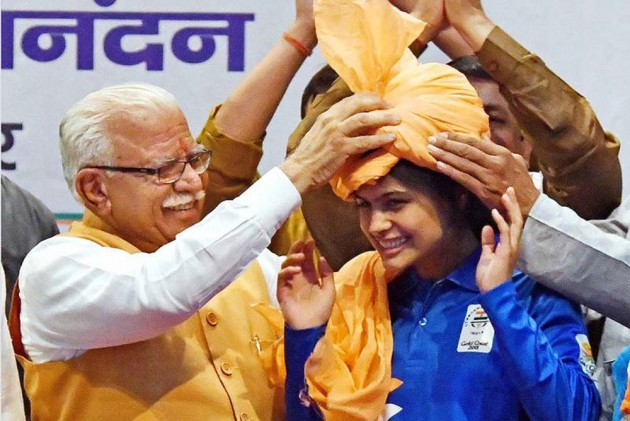 Teenage shooting sensation Manu Bhaker on Friday reminded Haryana sports minister, Anil Vij, of a Rs 2 crore cash award promise, which he made after her Youth Olympic gold medal, but is yet to fulfil.

The 16-year-old Bhaker caught the attention with her stunning exploits in shooting ranges across the world, winning multiple gold medals in her maiden senior World Cup, Commonwealth Games, besides the top prize at the Youth Olympics last October.

The pistol shooter, hailing from Goria village in Jhajjar, posted screenshots of Vij's tweet in which he had promised her cash award to the tune of Rs 2 crore on behalf of the state government.

"Sir Please confirm if it is correct... Or just Jumla (sic)," Bhaker wrote on Twitter.

Sir Please confirm if it is correct... Or just Jumla... @anilvijminister pic.twitter.com/AtxpLKBSYV

After Bhaker had become the first Indian shooter to win gold at Youth Olympics, Vij had tweeted, "Congratulations to Manu Bhaker for winning shooting gold in Youth Olympics.

"Haryana government will give a cash prize of Rs 2 crore to Manu Bhaker for winning this gold. Previous governments used to pay Rs 10 lakh only."

The shooter also felt that someone in the Haryana government has been playing "games" with the money that was to be awarded to the medallists.

As per the state government's changed policy, which came into effect before the Youth Olympics, Rs 2 crore was marked for the gold medallists, Rs 1.25 crore for silver medallists and Rs 80 lakh for the bronze winners. Before that, the YOG medallists would get Rs 10 lakh, Rs 7.5 lakh and Rs 5 lakh in descending order.

However, the government again revised its policy last December and brought the amount down to Rs 1 crore for gold, Rs 65 lakh for silver and Rs 40 lakh for the bronze medallists.

Bhaker's father Ram Kishan Bhaker, who is a chief engineer in the Merchant Navy, said moves such as this can break the morale of athletes.

"Far from motivating sportspersons, such moves will break their morale. She is yet to get the promised cash award and now they have revised the policy again. I really hope enough thought is given before they finalise something. Otherwise, it can be detrimental to an athlete's career," Bhaker senior told PTI.

Bhaker had a phenomenal year in 2018 when she won the Commonwealth Games gold in Gold Coast, a month after winning gold in the 10m air pistol individual and team events at the ISSF World Cup in Guadalajara, which was her maiden appearance in a senior meet.