Another week, another home defeat for Arsenal as Mikel Arteta's men were humbled 1-0 by Burnley on Sunday, increasing the pressure on the former Gunners captain. (More Football News)

On the other side of the north London divide, Tottenham are enjoying a strong campaign – though a 1-1 draw with Crystal Palace will likely frustrate Jose Mourinho.

Nevertheless, they will have been relieved to see Liverpool also drop points once again, with this being the first matchday since January 2016 in which none of the so-called 'big six' managed to win.

Here is the pick of the Opta facts from Sunday's action in the Premier League.

This is not how it was supposed to go. When Arteta became Arsenal head coach late last year, he was billed as the next big thing, Pep Guardiola's protégé was coming in to preside over and establish a new era at Emirates Stadium.

But the 1-0 loss at home to Burnley on Sunday was another reminder of the sorry state of affairs at the club – they have now lost four successive home league games, their worst such run since 1959.

Added to that, they have scored just 10 goals in 12 Premier League games in 2020-21, their lowest figure at this stage of a top-flight campaign in 39 years.

While Pierre-Emerick Aubameyang's first ever goal own at club level was decisive, Arsenal certainly weren't helped by Granit Xhaka's foolish red card, which was the Gunners' sixth dismissal in the league during the Spaniard's short tenure. No other Premier League side has had more than three in the same period.

Media reports of divisions in the dressing room began to appear in the wake of this defeat, and the indiscipline on show lately certainly does Arteta's cause no favours.

4 - Arsenal have lost each of their last four Premier League home games, their worst top-flight run on home soil since December 1959, a sequence which also included defeat to Burnley. Lonely. #ARSBUR pic.twitter.com/kOmUXBeY9Z

Premier League shocks involving Jurgen Klopp's Liverpool and newly promoted teams – certainly in the past few years – are something of a rarity.

But Fulham became the first promoted team to avoid defeat to the Reds since Newcastle United in October 2017 (which was also a 1-1 draw), ending an 18-match winning run for Liverpool in such contests.

Nevertheless, it might have been far worse for Liverpool, who needed a late equaliser from Mohamed Salah to rescue a draw – that was the 85th point the Reds have recovered from a losing position under Klopp in the Premier League, more than any other team in the same period.

But that does not detract from the fact Liverpool are winless in five away league games after Sunday's stalemate, their joint-longest such streak under their German manager.

Kane was the one on the scoresheet at Selhurst Park on Sunday, with Son getting the assist, making it 12 Premier League goals they have combined for this term. Only Alan Shearer and Chris Sutton (13 in 1994-95) have teamed up for more in a single season.

Additionally, that was Kane's fifth Premier League goal at Selhurst, making him the most prolific visiting player against Palace along with former Spurs star Jermain Defoe.

The England striker has arguably found another level under Mourinho, with his 43 goal involvements (29 scored, 14 set up) across all competitions more than any other Premier League player since the Portuguese coach took over. 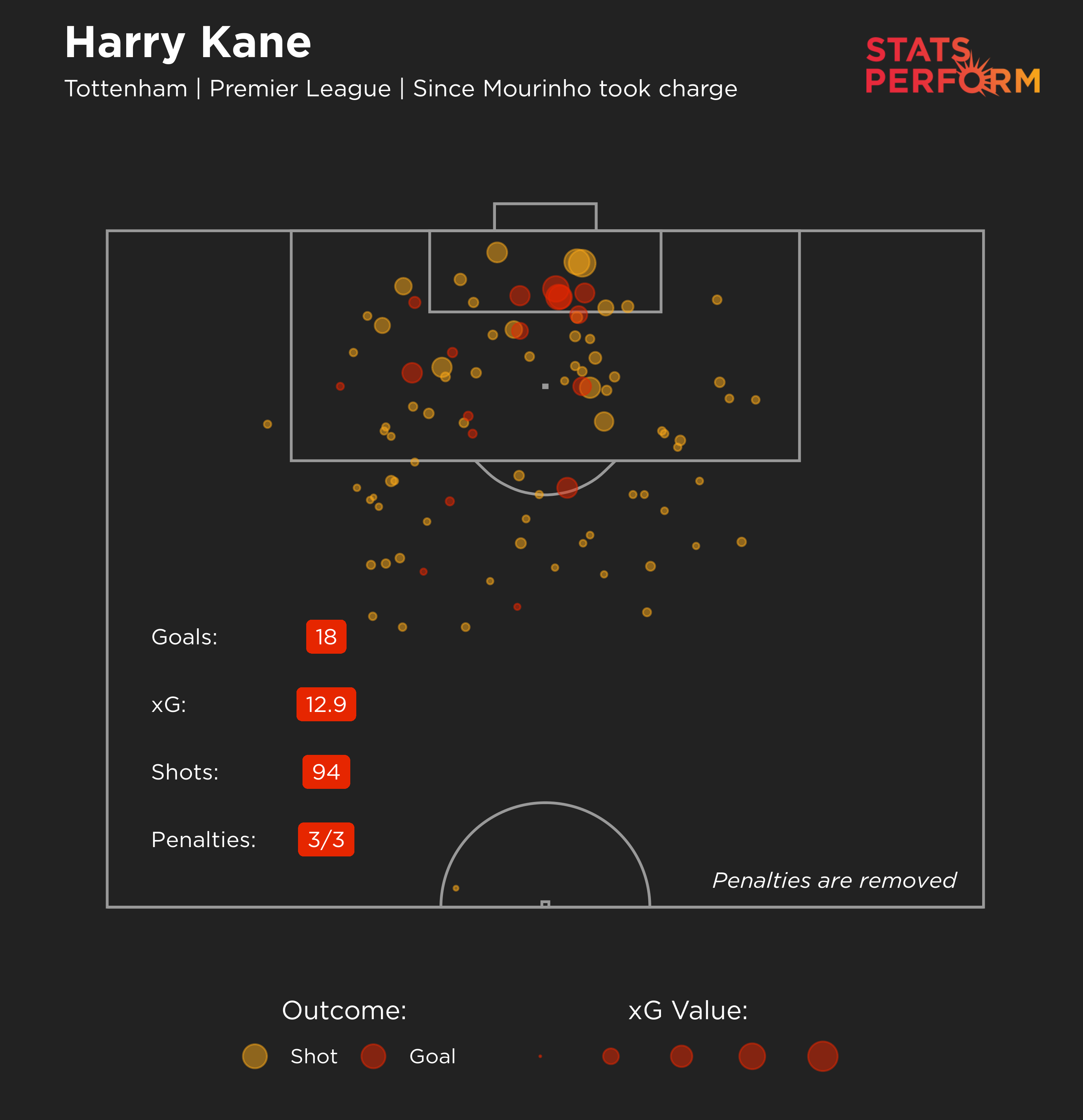 But, frustratingly for Spurs, they were unable to keep Palace out, as Jeffrey Schlupp's goal was the first conceded by Tottenham in 475 minutes in the competition – this run went back to the start of November.

15 - Harry Kane has become the third player within the top five European leagues this season to already reach the 15 goal mark in all competitions, after only Erling Haaland (17) and Robert Lewandowski (16). Bagsmen. pic.twitter.com/MfF2Yk7Hv5

The 2020-21 season just gets grimmer every week if you are a Sheffield United player or fan. Southampton dished out their latest defeat on Sunday, the 3-0 loss ensuring the Blades became only the fourth side in English professional football history to have no more than one point from their opening 12 games to a season.

The most recent team to endure such misery was Newport County (one point) in the fourth tier in 1970-71 – before that, you have to look back to the 1930s for the other examples; Manchester United (no points) in the 1930-31 top-flight season and New Brighton (one point) the following campaign in the Third Division North.

They are also only the seventh side to lose each of their opening six away games in a Premier League season, the first since Palace in 2017-18, while their 74 first-half passes were the fewest by a team in the opening 45 minutes of a Premier League game since February 2007.

But that shouldn't distract from the Saints' excellent form – they reached 23 points with this win, the second-highest figure they've managed after 12 top-flight games after 2014-15 (26 points).

Everything is looking rather rosy for Leicester City and Brendan Rodgers, who are consistently impressing and – more importantly – consistently winning.

Their comfortable dismantling of Brighton on Sunday was their eight Premier League win of the season, the most in the division and their joint-highest tally at this stage of a top-flight season (with 2019-20).

Jamie Vardy scored between James Maddison's first ever Premier League brace, with the striker taking his haul to 10 for the season. He's also got four assists to his name. 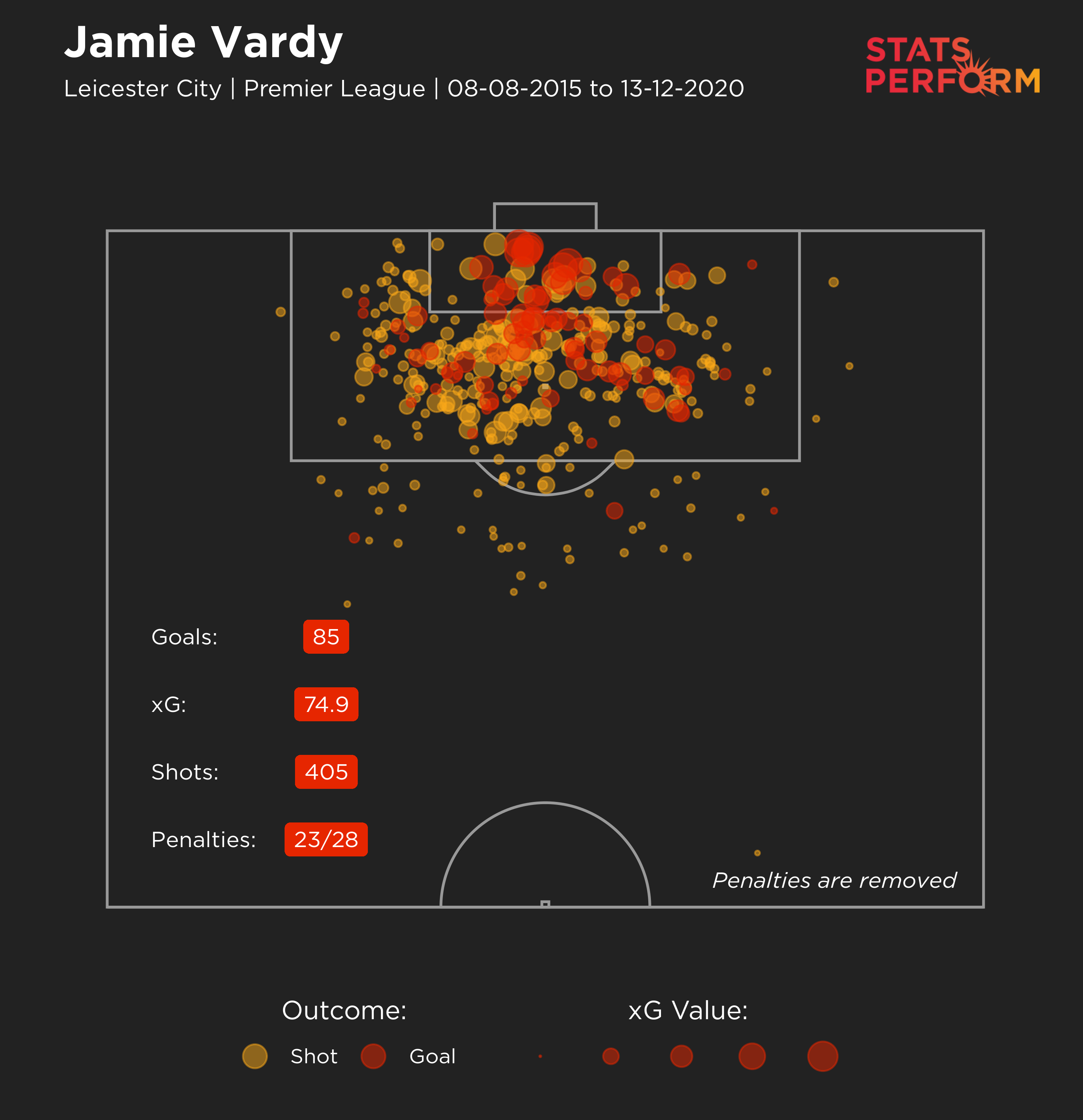