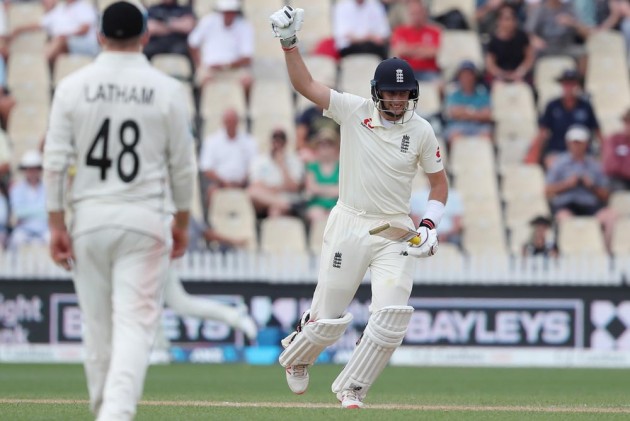 An unbeaten century from Joe Root helped England stay in the second Test against New Zealand in Hamilton on Sunday.

The England captain scored his first Test century since February to give the tourists hope of salvaging a drawn series.

Rory Burns (101) also made a century after England had resumed in a precarious position at 39-2.

Burns and Root controlled the first session, although the latter needed a review when given out caught behind on 47, a delivery from debutant Daryl Mitchell (0-28) having hit his pad, not bat.

Burns was dropped on 10 on Saturday and he survived again on 86, Matt Henry (1-56) squandering a great run-out chance as the difficult day continued for New Zealand.

The England opener would reach his second Test ton before being run out thanks to excellent fielding by Jeet Raval.

RAVAL RUNOUT! Jeet with some slick work on the square leg boundary and Rory Burns (101) is out by a frame!

England had battled through the second session as Ben Stokes (26) joined Root before the all-rounder edged Tim Southee (2-63) to Ross Taylor at slip.

Much to his relief, Root got to his 17th Test century thanks to an under-edge that went for four.

Zak Crawley, making his Test debut for England, only lasted six balls before edging behind to BJ Watling off Neil Wagner (1-76).

Rain meant the day was cut short with England back in the Test and hoping Root and Ollie Pope (4) can push them into a first-innings lead on Monday.