Real Kashmir went down 2-0 as Mohun Bagan rode goals scored late in the second half. The defeat didn't dampen the spirit of the Kashmir fans 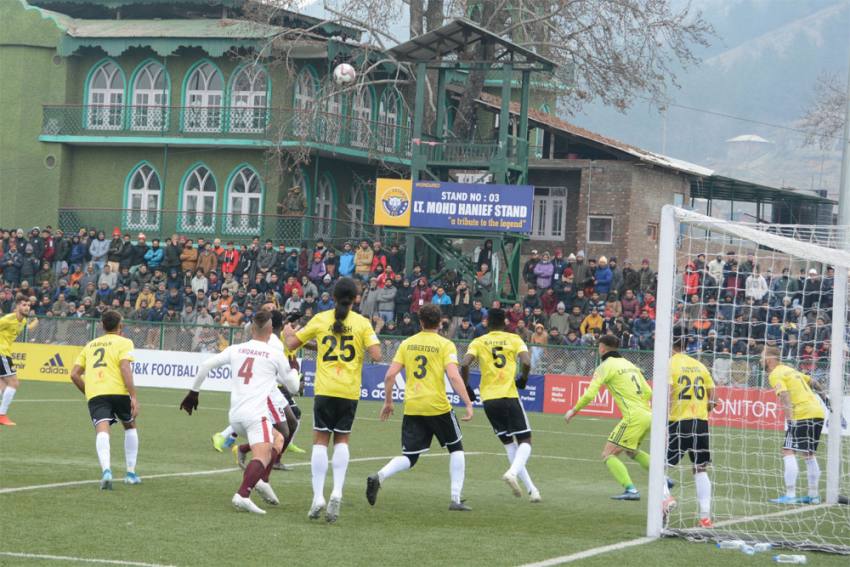 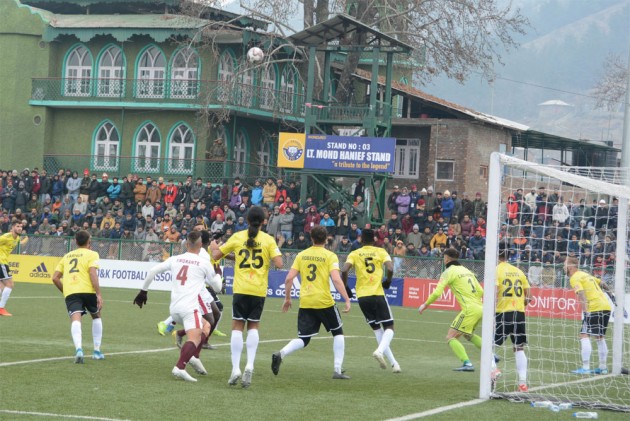 Real Kashmir lost to Mohun Bagan 2-0, but their fans were not defeated. In a sporting gesture towards the former I-League champions, the spectators didn't the result freeze their enthusiasm towards football in Srinagar's TRC Turf Ground Sunday afternoon. (More Football News)

Goals from Joseba Beitia (72') and Nongdamba Naorem (73') ended Real Kashmir's unbeaten run in the competition. The win also sent Kibu Vicuna's Mohun Bagan to pole position in the I-League table, with 10 points from five matches. Kashmir are seventh in the standings with five points from four fixtures.

Braving the cold winter, it was minus three degrees Centigrade, football fans of The Valley flocked to the stadium from all corners of Srinagar, synchronizing with the mood of a Sunday. The spectators ranged from six-year children to 80-year-old grandparents.

The presence of about 8,000 spectators in the stadium was in stark contrast to the subdued atmosphere prevailing in Srinagar due to stringent security arrangements due to political developments in the region. The fans were raucous and loud. Expressing their love for football, the crowd cheered for both teams, with Bagan hardly receiving any jeers.

The visitors finally handed new acquisition Baba Diawara his I-League debut. He is a striker from Senegal. Dhananchandra Singh was re-introduced in the starting XI, due to the suspension of Gurjinder Kumar. Meanwhile, David Robertson started with the same lineup, which defeated Chennai City in their previous fixture.

Both sides started off on a conservative note. Mohun Bagan were preserving their energy for the second half, due to the chilly weather in the region. Meanwhile, the Snow Leopards were absorbing pressure and hoping to capitalize after halftime, a complete contrast to their tactics in this season.

Although Bagan dominated possession in the opening 45 minutes, it was David Robertson's team which created more clear-cut chances. In the 15th-minute, Kallum Higginbotham tested Sankar Roy with a header, which went wide, receiving a huge applause from the stands.

In the 29th-minute, Beitia put in a curling freekick, which was chaotically dealt with by the Kashmir defence, before anybody could attempt a shot on target. Soon, Fran Gonzalez, who is also the top scorer in the competition right now with five goals, saw a header go wide in the 38th-minute.

Loveday Enyinnaya could have given Real Kashmir the lead before halftime, but saw his header hit the crossbar in the 42nd-minute.

Bazie Armand tested the Bagan defence in the opening stages. Robertson also introduced Gnohere Krizo in the hope of finding a winner. The home side could have taken the lead in the 65th-minute, but Sankar Roy saved his side, with a brilliant save off a header from Mason Robertson, via a Higginbotham setpiece. With both teams still trying to gain supremacy in the middle of the park, chances were few, with the action finally getting ignited after the 70th-minute.

In the 72nd-minute, Beitia finally gave Mohun Bagan the lead after a phase of long balls. It was a long throw from the right flank, which found Daniel Cyrus, who deflected the ball into the path of Beitia. The midfielder showed his technical brilliance, with a right-footed shot, which sent the ball into the back of the net.

Nongdamba Naorem's 73rd-minute strike silenced the Kashmir fans. Sk Sahil showed his immaculate vision to find super substitute PM Britto down the right flank with a delicate through ball. Britto floated in a cross into the Kashmir penalty box. Noarem, who has been having a good season, scored past Lachenpa Phurba with a brilliant volley.

Krizo could have pulled one back for Real Kashmir, but saw his 79th-minute volley fly above the crossbar from point-blank range. This was followed by the striker once again fluffing his lines in the next minute, after a delicious cross from Mason Robertson missed the mark. With five minutes to go, Real Kashmir captain Loveday Okechukwu also missed the best chance of the game, which was a header.

The defeat was a disappointing one for Real Kashmir, as it was a home game, but it didn't sadden the crowd, who cheered for both teams after full time.

Defender Fran Morante received the Man of the Match award due to his sturdy display in keeping the opposition attackers at bay. In their next match, Real Kashmir will host Punjab FC on January 10. Meanwhile, Mohun Bagan will host Indian Arrows a day earlier.