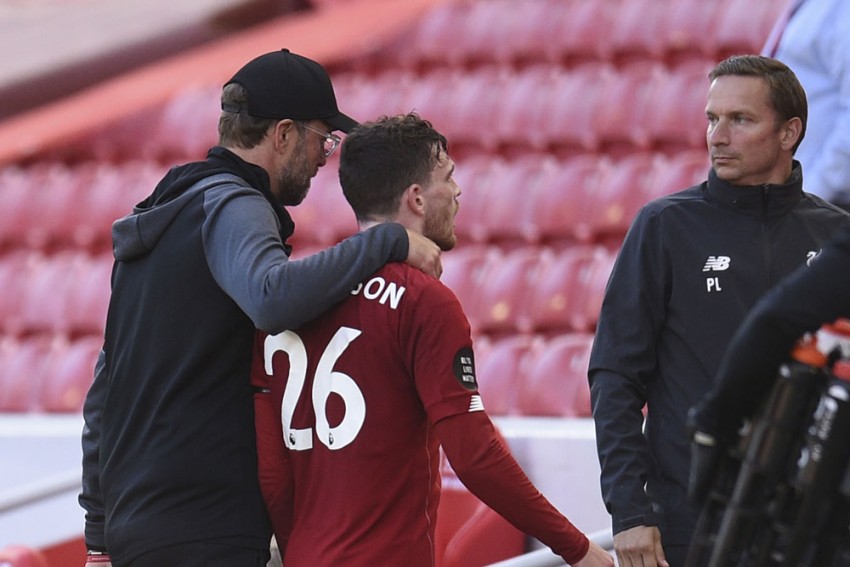 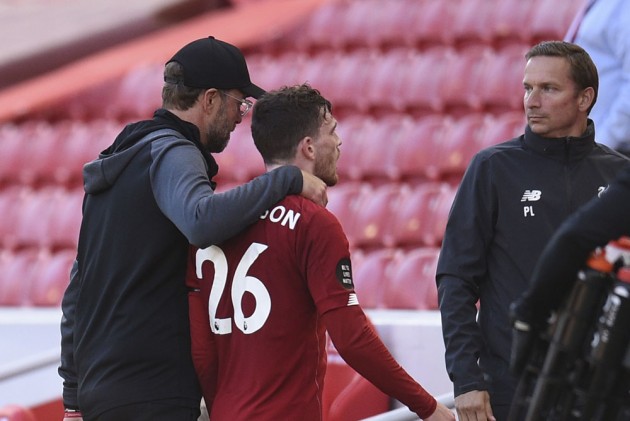 The champions dominated the Clarets for much of the game and Andy Robertson put them in front in a one-sided first half that saw the outstanding Nick Pope make a string of fine saves.

Roberto Firmino hit the post after the break as Liverpool remained on the front foot, but the in-form Clarets started to pose more of a threat and Rodriguez salvaged an unlikely point.

Liverpool need seven points from their last three games to match Manchester City's record of 100 points in a top-flight season after slipping up at home following 24 successive league wins.

Liverpool played with the swagger of champions from the start and Pope produced a brilliant reflex save to keep out Mohamed Salah's right-footed volley before the Clarets goalkeeper superbly denied the Egypt forward once again.

The Reds applied relentless pressure and they were rewarded after 34 minutes, Fabinho picking out Robertson with a pinpoint diagonal ball and the left-back ghosted in unmarked from the right to plant a header into the far corner of the net.

Burnley were on the ropes and Pope produced more heroics on the stroke of half-time, somehow palming Sadio Mane's rasping left-foot drive away for a corner.

Liverpool carried on where they left off after the break, Firmino striking the post with his left foot before Curtis Jones - making his first Premier League start - fired into the Kop.

Salah was denied a penalty when he tangled with James Tarkowski, who was then involved in an equaliser from out of the blue with just over 20 minutes to go.

The centre-back nodded down a free-kick in the Liverpool penalty area and Rodriguez swivelled to drill into the far corner with his right foot and Gudmundsson struck the bar in a dramatic finale.

23 - Liverpool had 23 shots in this match, their most in a Premier League game they failed to win since December 2017 (23 vs Everton). Holy. pic.twitter.com/YHKvK0FUeI

What does it mean? Reds have little margin for error in pursuit of a century

It appeared Jurgen Klopp's men were going to ease to yet another win on Merseyside, but a combination of Rodriguez and Pope had other ideas.

The champions need to win all three matches against Arsenal, Chelsea and Newcastle United to better City's tally of 100.

Liverpool could have had the points sewn up at half-time if it were not for the brilliance of Pope.

The Burnley keeper has been outstanding this season and is putting serious pressure on England number one Jordan Pickford.

Firminho has played a big part in Liverpool's success this season, but the Brazil forward has still not scored a home goal in the league.

He was left holding his head yet again after he beat Pope with a left-footed shot but saw his effort come back off the woodwork.

-  Burnley have lost just one of their last 13 Premier League games, winning seven and drawing five. Only Manchester United are on a longer current unbeaten run than the Clarets, who have not lost in their last five matches.
- Liverpool had 23 shots in the match, their most in a Premier League game they failed to win since December 2017 - when they had 23 versus Everton.
- Robertson's goal was his first in the Premier League for Liverpool at Anfield in 790 days, since netting against Brighton and Hove Albion on the final day of the 2017-18 campaign.
- Burnley striker Rodriguez has scored in back-to-back Premier League games for the first time since April 2018. He has been involved in a goal in each of his last four Premier League outings - with three goals and an assist.

Liverpool travel to the capital for a clash with Arsenal on Wednesday, while the Clarets face Wolves at Turf Moor on the same evening.