India lost to West Indies 5-0 in an away series in March 1989. KL Rahul's ton went in vain today as New Zealand chased down a big total with ease to clinch series 3-0 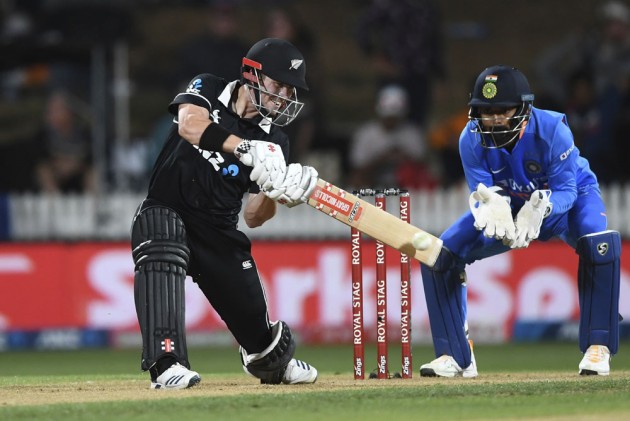 India suffered their first whitewash in ODIS after 30 years, losing to New Zealand. West Indies handed India a 5-0 defeat at home in Match, 1989, and South Africa won 4-0 on home soil in 2006 after the first match was abandoned. The Black Caps put in an all-round display to wrap up India in the series and 3rd ODI at Mount Maunganui. India will be disappointed particularly with the displays of their bowlers. India set a 296-run target, which the hosts crossed in 47.1 overs. Follow here highlights of New Zealand (NZ) Vs India (IND) here.

15:09 hrs IST: FOUR!!! IT WAS A LOW FULL TOSS BY THAKUR. GRANDHOMME FLICKED IT DEEP MID-WICKET. AND NEW ZEALAND's WHITEWASH OF INDIA HAS BEEN COMPLETED.

15:06 hrs IST: FOUR!!!! De Grandhomme reaches his 50 in 21 balls. Full delivery outside off stump by Thakur. He sends it away to fine leg fence.

14:33 hrs IST: OUT!!! Chahal tosses it up and Neesham sends it straight to mid-wicket, where Kohli does the rest.

14:20 hrs IST: One run. It was a full delivery by Jadeja. Neesham drives it towards long-on.

14:05 hrs IST: OUT! CAUGHT!!! It was a short and wide outside off delivery by Thakur. Nicholls cuts it through the offside, but gets an edge that goes to Rahul.

13:59 hrs IST: Jadeja sends a good delivery. Taylor sends it to short cover for a catch. First dismissal in the series for Taylor.

13:38 hrs IST: OUT!!! Chahal sends a lofted delivery. Williamson sends it directly to midwicket, where Agarwal catches it.

13:14 hrs IST: One run. It was a fuller delivery by Jadeja. Nicholls sends it clear of midwicket in the circle.

12:51 hrs IST: One run. A good delivery by Thakur. Guptill sends it down to third man.

12:43 hrs IST: One run. Run missed by India. It was a length ball by Jadeja. Guptill sends it to cover-point. The ball is thrown flat and quick but Rahul drops it, and has the stumps without the ball.

12:35 hrs IST: Two runs. It was a length ball by Saini but down the legside. Nicholls sends it towards deep square leg.

11:18 hrs IST: FOUR!!! It was a low full toss. Saini goes down on one knee and slams Southee's delivery over mid-off. Finishes off India's innings with a boundary!

11:10 hrs IST: OUT!!!!! It was a full toss by Bennett. Thakur swipes across the line. Gets it near the bat's end and de Grandhomme is there to catch it.

10:59 hrs IST: OUT!!! Bennett sends a good delivery. Pandey doesn't get enough underneath and lifts it to long-on. Santer takes the catch.

10:55 hrs IST: OUT!! THIS TIME JAMIESON TAKES THE CATCH AFTER DROPPING RAHUL EARLIER!!! HE FLINGS IT IN ANGER!!! It was shorter length delivery. Rahul gets it higher on the bat while trying to pull. Jamieson runs to his right at long-off and does the rest.

10:45 hrs IST: Two runs and an ODI hundred for KL Rahul. It was a length ball outside off by Bennett. Rahul sweeps it to deep square leg's right.

10:33 hrs IST: FOUR!! Santner sends a poor delivery. Pandey drives it over the bowler for a straight boundary.

10:07 hrs IST: No run. It was a good length delivery by Southee. Rahul punches it to cover.

09:04 hrs IST: No run. Iy was a flatter outside off by Santner. Rahul cuts it towards cover point.

08:39 hrs IST: No run. It was a full delivery by de Grandhomme. Iyer sends it towarrds cover.

08:12 hrs IST: SIXX!!! It was short and wide outside off by Bennett. Shaw slams it over point and it goes over the boundary too.

08:01: OUT!!!! WHAT DID KOHLI DO? It was a length outside off delivery by Bennett. Kohli tried sending it over point, but it went to Jamieson at third man instead.

07:58 hrs IST: FOUR!!! Jamieson sends it short outside off. Shaw cuts it past point with ease.

07:40 hrs IST: OUT!!!! WHAT A GREAT START BY JAMIESON! He sends the seam on a length on off and it goes straight. Agarwal does it all wrong, and it goes into the off stump.

07:03 hrs IST: Kane Williamson has won the toss. He has elected to bowl first. India will bat.

07:00 hrs IST: Kane Williamson is back for New Zealand today. He will be leading the Black Caps.

06:55 hrs IST: Good morning everyone and welcome to Outlook's live coverage of the 3rd ODI between New Zealand and India. Will the hosts complete a cleansweep or can Virat Kohli's restore pride?

India were comprehensively beaten in the first ODI even after posting 347 in Hamilton with Ross Taylor setting up a record chase for the Kiwis. The veteran wasn't done. He dropped the anchor in Auckland, guiding hosts to another convincing win for an unassailable 2-0 lead. Also, they didn't feel the loss of mercurial skipper Kane Williamson, who needed time to recuperate his injured shoulder. But the skipper all set to make a return.

But India sure missed the services of Rohit Sharma, their Hitman. With experienced Shikhar Dhawan's also missing the action, the visitors have failed to wrest the early initiatives in both the outings. Both Prithvi Shaw and Mayank Agarwal are good, but here, they were found wanting.

Virat Kohli, who downplayed the importance of ODIs in a T20 World Cup year, is likely to make more than a couple of changes. The likes of Rishabh Pant and Manish Pandey are likely to make the playing XI. Another worrying aspect is the shape of Shardul Thakur, his figurative figures. The pacer, despite his batting abilities, may face the axe.