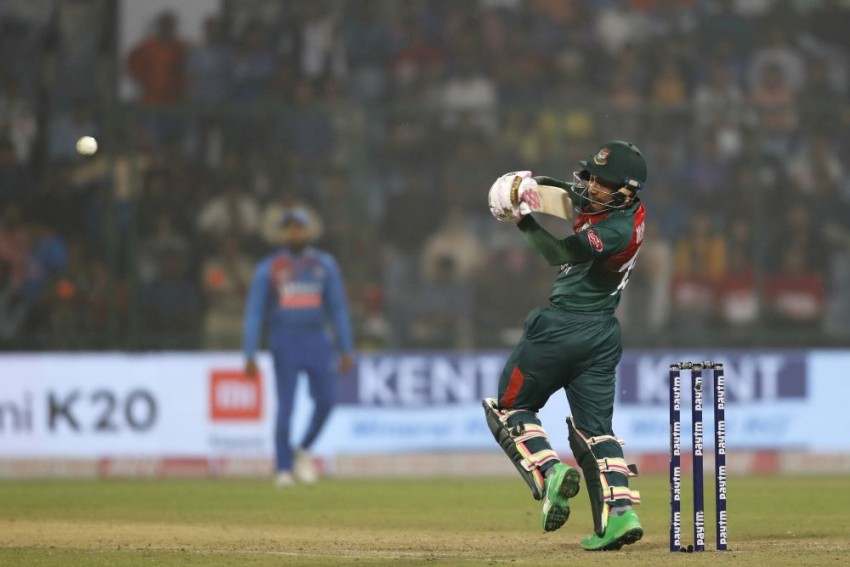 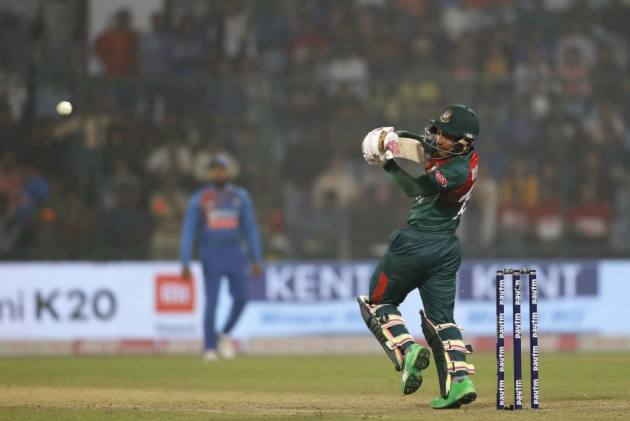 Mushfiqur Rahim's unbeaten half-century helped Bangladesh trounce India by seven wickets in the first T20I at the Arun Jaitley Stadium, New Delhi on Sunday (November 3). After being asked to bat first, the hosts never got going and were restricted to 148/6. Dhawan was the top-scorer with 41 but he consumed 42 balls. For Bangladesh, Shafiul and Aminul Islam took two wickets each. In reply, the tourists overhauled the target with three balls to spare to record their maiden win against India in nine T20I meetings. Rahim scored 60 off 43. The second T20I will be played in Rajkot on Thursday (November 7). Catch highlights of IND v BAN, 1st T20I here (SCORECARD | CRICKET NEWS)

Mushfiqur Rahim, Player of the Match: "We were playing in front of a huge crowd, so that feels special. Soumya and I had a chat, we thought maybe we could drag the game deep. Luckily, we had a big over but I think Soumya played his role really well. Naim too and as did the bowlers. I am doing my level best to improve as a cricketer, and hopefully do well for Bangladesh in each and every game."

22:25 hrs IST: SIX! That's it. Bangladesh win by seven wickets. The first victory for Bangladesh in nine T20s against India.

22:21 hrs IST: Four consecutive boundaries for Rahim. Completes his half-century in the proces. 18 off the penultimate over, and just four to win off the last one. Shivam Dube to bowl the final over. Interesting move from Rohit considering D Chahar had an over left.

22:08 hrs IST: OUT! Slower one from Khaleel, a length ball at the stumps, Sarkar looks to hit it behind point but misses and the ball clatters into the stumps. Just the breakthrough India would've wanted. Bangladesh are 114/3 after 17 overs, need 35 off 18. Chahal comes back into the attack

21:50 hrs IST: SIX! Krunal has bowled this wide outside off, Sarkar comes down the track and smacks it way over deep midwicket for a maximum. Costly over from the Indian, 12 off it. Bangladesh are 94/2 after 14 overs, need 55 off 36. Khaleel comes back into the attack

21:39 hrs IST: FOUR! Fuller delivery from Krunal, on the stumps, and Mushfiqur sweeps this away behind square leg for a boundary. Bangladesh are 69/2 after 11 overs, need 80 off 54

21:27 hrs IST: OUT! Length ball from Chahal, on middle, Naim looks to clear the leg side, but gets a top-edge and Dhawan, running in from long-on, makes no mistake. Mushfiqur Rahim comes to the crease. Bangladesh are 54/2 after 8 overs. Krunal Pandya comes into the attack

21:20 hrs IST: FOUR! Length ball from Khaleel, outside off, Sarkar slaps it hard and over Rohit at cover. Bangladesh are 53/1 after 7 overs. Naim 26*, Sarkar 18*. Yuzvendra Chahal comes into the attack

21:15 hrs IST: SIX! Reverse slog sweep. Fuller delivery from Sundar, on off, Sarkar sets himself up for the shot. Hammers this over shot third man! Expensive over from the offspinner, 13 off it. Bangladesh are 45/1 after 6 overs. Naim 25*, Sarkar 12*. Khaleel Ahmed comes into the attack

21:05 hrs IST: Another extremely good over, this time from Sundar. Get a feeling the last two overs of India's innings will be the difference. Bangladesh need to up the ante here. They are 20/1 after 4 overs. Naim 8*, Sarkar 4*

20:53 hrs IST: OUT! Length ball from Chahar, swinging away and Liton checks his shot at the last moment. Hits the toe-end of his bat and Rahul, the fielder at cover point, takes a simple catch. Soumya Sarkar comes to the crease. Bangladesh are 9/1 after the first over. Washington Sundar comes into the attack

20:46 hrs IST: Welcome back! Liton Das and Mohammad Naim will open the innings for Bangladesh. Deepak Chahar to begin proceedings

20:35 hrs IST: That's it. India have done well - 16 from the over - 30 off the last two overs and the hosts have 148 on the board after a slow start. Krunal pulls the last ball high and over square leg for a maximum. He remains unbeaten on 15 off 8. Sundar, on the other hand, hit 14 off 5 with two sixes. Dhawan was the top-scorer with 41(42). The Bangladesh bowlers used the variations well. We'll be back in a while with Bangladesh's chase

20:21 hrs IST: FOUR! Touch short from Mustafizur, outside off, Pant opens the bat face and punches it behind point for a boundary. India are 110/5 after 17 overs. Pant 20*, Krunal 1*. Al-Amin comes back into the attack.

20:15 hrs IST: OUT! Length delivery from Afif, Dube looks to help it on the leg side but the ball stops at him. Leading edge and the bowler times his jump to take it with his right hand. Krunal Pandya comes to the crease. India are 102/5 after 16 overs. All eyes on Pant now. Mustafizur comes into the attack.

20:09 hrs IST: WICKET! Length ball from Mahmudullah, Pant plays it towards midwicket, they complete the first run quickly. Pant calls for the second and Dhawan is up for it, but Pant realises it's impossible for him to make it to the other end. Dhawan tries to get back but is well short. Mushfiqur Rahim breaks the stumps. Shivam Dube comes to the crease. India are 95/4 after 15 overs.

20:00 hrs IST: FOUR! Short ball from Mosaddek, Dhawan rocks back and pulls it between deep midwicket and deep square leg for a boundary. Eight off the over. India are 83/3 after 13 overs. Dhawan 33*, Pant 4*

19:53 hrs IST: OUT! Fuller from Aminul, outside off, Iyer looks to clear the long-off region but the ball hits the toe end of the bat. Naim settles under it and takes it comfortably. Second wicket for the legspinner. Rishabh Pant comes to the crease. India are 73/3 after 11 overs. Afif Hossain, right-arm off break, comes into the attack.

19:43 hrs IST: SIX! Stand and deliver! Tossed up from Aminul, and Iyer smashes it over the bowler's head for a maximum. Such shots can shatter the confidence of a bowler. Poor over from the Bangladeshi, nine off it. India are 60/2 after 9 overs. Dhawan 21*, Iyer 15*

19:39 hrs IST: FOUR! Sarkar misses his line, and Dhawan uses his wrists to work this past the short fine leg fielder for a boundary. India are 51/2 after 8 overs. Dhawan 19*, Iyer 8*. Aminul again

19:34 hrs IST: OUT! Length delivery from Aminul, outside off and turning away. It came a lot slower than Rahul anticipated. Chips it straight to covers and the Bangladesh skipper does the rest. India struggling to get the momentum. Shreyas Iyer comes to the crease. India are 44/2 after 7 overs. Soumya Sarkar comes into the attack.

19:30 hrs IST: FOUR! Length ball from Shafiul, on off, and Rahul flicks this off his hips over square leg for a boundary. Super! Six off the over. India are 35/1 after the end of powerplay. Rahul 15*, Dhawan 11*. Some spin now. Aminul Islam comes into the attack.

19:26 hrs IST: FOUR! Back of a length delivery from Mustafizur, outside off, and Dhawan slices it past the fielder at point and third man. Much-needed boundary for India. They are 29/1. Dhawan 10*, Rahul 10*. Shafiul comes back into the attack

19:20 hrs IST: Another wonderful over from Al-Amin, just four singles from it. India are 22/1 after 4 overs. Rahul 8*, Dhawan 5*. Here's the first change in bowling. Mustafizur Rahman comes into the attack. Can he strike straightaway?

19:16 hrs IST: FOUR! Length ball from Shafiul, outside off, and Rahul cuts it to the point boundary. Brilliant! India are 18/1 after 3 overs. Rahul 6*, Dhawan 3*. Looks a good Kotla wicket. The ball is coming on to the bat nicely, and some movement for pace bowlers. A bit on the slower side too.

19:07 hrs IST: OUT! Rohit given LBW, but he reviews! Slower delivery from Shafiul, outside off but coming in. Rohit is through his defensive shot early. Ball hits his back leg and the umpire raises his finger. The stand-in skipper discusses with Dhawan before opting for the review. Replays show that the ball is clipping middle stump, so it's 'umpire's call'. India retain their review though. KL Rahul comes to the crease. India are 10/1 after the first over. Al-Amin Hossain comes into the attack

19:04 hrs IST: FOUR! Length ball from Shafiul, outside off, and Rohit hammered it past cover for a boundary. Shot! Becomes T20I cricket's highest run-scorer. Surpasses Kohli who has 2,450 runs in the format.

19:00 hrs IST: Time for live action. Rohit Sharma and Shikhar Dhawan are at the crease. Shafiul Islam to open the attack

Bangladesh have won the toss and have opted to field

18:15 hrs IST: Shivam Dube to make his debut. He just got his T20 cap from Ravi Shastri. Dube becomes the 82nd player to represent India in the format.

STAT ATTACK - India have played eight T20s against Bangladesh and have won all of them. This is the second time India are playing Bangladesh at home, the first being the World T20 encounter in Bengaluru in 2016.

18:01 hrs IST: Rohit Sharma appeared for the press conference on Saturday in Delhi. He reckons Bangladesh can definitely beat India, and if they do, it will no longer be considered an "upset". READ HERE

17:30 hrs IST: GOOD NEWS - The visibility in Delhi has improved significantly over the last hour or so. As per reports, both teams are happy to play.

17:18 hrs IST: With air quality over the past few days being the worst so far this season, AIIMS director Randeep Guleria has said that “Delhi’s air pollution level is now affecting even healthy individuals and is a cause for concern”. Should the T20 be called off?

17:02 hrs IST: In December 2017, some Sri Lanka players wore masks while fielding after the lunch session on Day 2 at the Arun Jaitley Stadium (earlier known as Ferozshah Kotla Stadium). In an unprecedented incident, the tourists enforced a couple of interruptions because of "unhealthy conditions".

UPDATE - It has been learnt that the match referee Ranjan Madugallle is monitoring the situation and will do so with the view of the impact on players and match officials. The focus is on visibility.

Rohit Sharma - "We've stuck with Pant and this is the format that gave him a lot of attention. We have to stick with him for a while and see how he performs. There's a lot time left before we pass any judgment. Sanju has been performing well in the last two years and Shivam has come only last year, which is why people were so keen to buy him. They both have a lot of talent and they both have a lot of abilities."

Mahmudullah - "When we first came here, there was a lot of smog. The players have adapted well. It's not in our control and everyone is fit."

16:42 hrs IST: Bangladesh players did their best to brave the conditions, opting for masks in both training sessions before the game, and their coach Russell Domingo did well to not sound like a complaining visitor. India, on the other hand, had one full practice session but opted for an optional one on the eve of the contest.

16:31 hrs IST: A public health emergency has been declared - schools have been shut - and there has been little improvement in the air quality index (AQI). For scale, the AQI level is deemed unhealthy when it's between 151 and 200. It's deemed hazardous when it's between 301 and 500. At 3pm today, the AQI at Jawaharlal Nehru Stadium, around 8 kms from the ground, was 912.

16:24 hrs IST: The light rain on Saturday (November 2) evening has made the situation worse for the Delhi and District Cricket Association (DDCA) officials as the smog has gone from bad to worse in the national capital.

16:23 hrs IST: Hello and welcome to Outlook's live coverage of the first T20 between India and Bangladesh. Promises to be an absolute cracker of a contest!