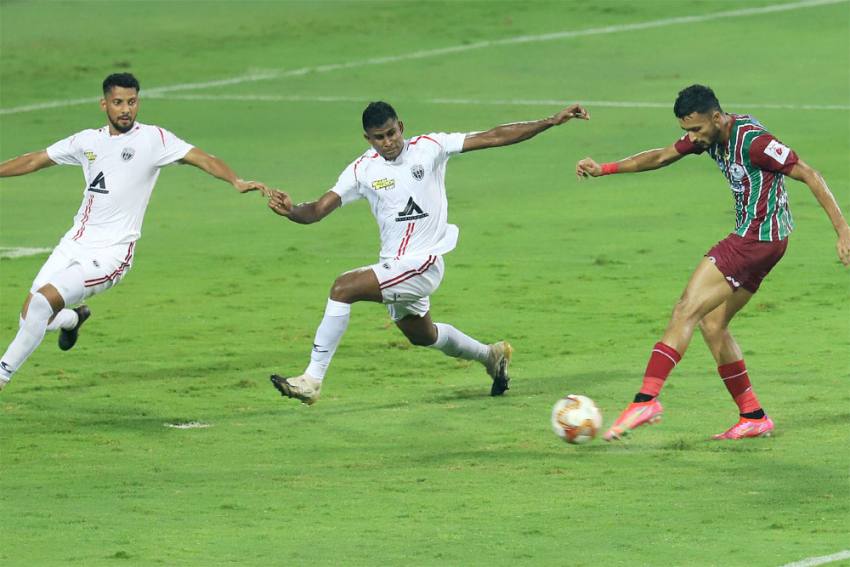 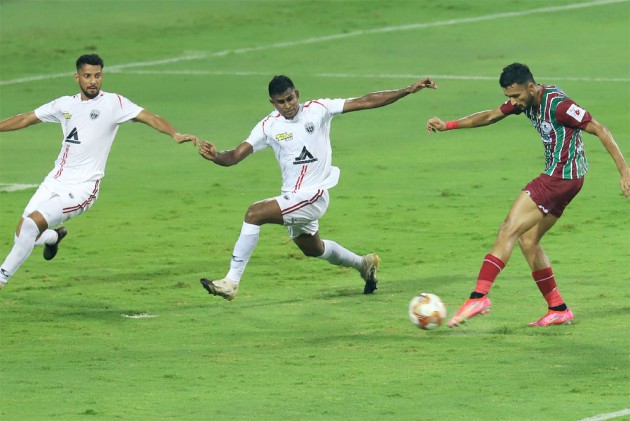 ATK Mohun Bagan held the fort against a spirited rearguard press by NorthEast United to seal a place in the Indian Super League (ISL) final with a 2-1 win (3-2 on aggregate) over the Highlanders at the Fatorda Stadium on Tuesday. (More Football News)

With this win, the Mariners have set up a mouth-watering blockbuster title clash against rivals and League Shield Winners Mumbai City FC.

The result also means that Bagan has qualified for the 2022 AFC Cup Qualifying Stage after finishing second in the league and qualifying for the final. Their opponents in the final, Mumbai City FC, have sealed the Asian Champions League spot.

David Williams (38') continued his form in the playoffs by scoring yet again while Manvir Singh (68') added the second before Suhair Vadakkepeedika (74') pulled a goal back for the Highlanders.

The Mariners adopted a completely different approach from the first leg. They had 16 shots in the first half but just three on target. It took them just three minutes to sound a warning.

Roy Krishna threaded an accurate pass to Javier Hernandez, who found himself in space before unleashing a low shot. His effort beat the keeper but came off the post.

Bagan kept pressing which forced NorthEast into mistakes at the back. Williams and Krishna kept tormenting the Highlanders, not allowing them to settle down.

Subhasish Roy made a couple of good saves to deny Subhasish Bose and Krishna. At the other end, Luis Machado forced a save from Arindam Bhattacharja when his dipping effort was pushed behind by the keeper for a corner.

However, the Kolkata side deservingly took the lead in the 38th minute and it was once again the man who scored in the first leg doing the damage for NEUFC. Krishna, on getting the ball, set up Williams upfront, who was quick enough to beat the Highlanders' defenders with pace. After entering the box, the Australian slotted home. That ensured that Bagan went into the breather with their noses in front.

NorthEast came back strongly in the second session and dominated the first 15 minutes. They created chances and tested the keeper, but just couldn’t get the equaliser they were looking at. Federico Gallego and Suhair were denied by Arindam.

But Bagan were soon back in control and found a second goal from a quick counter. An NEUFC set-piece was cleared by Bagan and Krishna was quick to initiate an attack from outside his own box. The Fijian played a long ball to Manvir, who got away from the opposition defenders and shot past the keeper.

NEUFC pulled a goal back just before the cooling break. The goal came from a set-piece. Machado whipped in a corner which was flicked on by Benjamin Lambot. Arindam missed the ball completely before it hit the post and Suhair was at the right place to head it into the goal.

The Highlanders got a massive opportunity to get back into the game when Idrissa Sylla was brought down by Bose in the box. The referee awarded a penalty, but Machado fired it wide to end Khalid Jamil’s unbeaten run as NorthEast United’s coach.