Mumbai India and Delhi Capitals finished one-two in the IPL 2020 league table; DC have never won the title while MI are four-time and defending champions

This will be the fourth time that Mumbai Indians and Delhi Capitals will clash in the Indian Premier League this season. While four-time champions MI have got better of DC thrice, the final will be a fresh start for both the sides.

Delhi Capitals lost the qualifiers against MI by 57 runs but a fighting win against perky Sunrisers Hyderabad on Sunday night, has given Shreyas Iyer's side a chance to right the wrong.

On paper, both MI and DC are equally matched. Their power hitters, fast bowlers and spinners have enough capability to turn their team’s fortunes. (PREVIEW)

Here are the five key clashes that can impact the IPL 2020 final between Delhi Capitals vs Mumbai Indians.

Kiwi pacer Boult is the lead bowler for Mumbai Indians this season with 22 wickets. Delhi Capitals seem to have finally got their opening combination right after Marcus Stoinis gave them a rousing start on Sunday night against Sunrisers Hyderabad's. Under the circumstances, Stoinis' wicket is a must-have for Mumbai Indians. However, Boult bowled only two overs in Qualifier 1 before going off the field with a groin strain. The left-arm pacer is expected to play in Tuesday's final. A perfect yorker knocked out the veteran and in-form Delhi Capitals opener in the Qualifier 1 and killed the contest. Delhi were reduced to zero for three wickets in 1.2 overs. Dhawan will be itching to exact revenge against Jasprit Bumrah. For the young and dangerous Bumrah, the motivation can be to win the purple cap back from DC’s Kagiso Rabada. Dhawan clicked on Sunday with a match-winning half century against SRH while Bumrah will be fresh and raring to go after a couple of days' rest. Quinton de Kock has been solid upfront for Mumbai Indians with 483 runs in 15 matches. The South African captain has time and again provided platform for MI’s power hitters to come in and launch an all-out attack. His early wicket can put MI under pressure and Kagiso Rabada must deliver for Delhi on Tuesday. Rabada is the current purple cap holder and his four wickets for 29 (vs SRH) will inspire the young South African to go for one final kill. And don't forget Rabada's South African ally - Anrich Nortje, who has already clocked 155kmph in this IPL, can can unsettle the best of batsmen. The current Purple Cap holder Kagiso Rabada's spell will be the key for Delhi Capitals chances in the final. Photo: BCCI

The master and the apprentice. Shreyas Iyer is relatively new at captaincy while Rohit Sharma has not only led Mumbai Indians to titles but also led the Indian team in high pressure matches. This is DC’s maiden entry in the IPL final and Iyer will make his team believe that Tuesday is a fresh day and past records count for nothing. Rohit Sharma will now have an extra spring in his feet. He has been picked for the Tests in Australia and a fifth IPL crown will be the cherry on the cake. 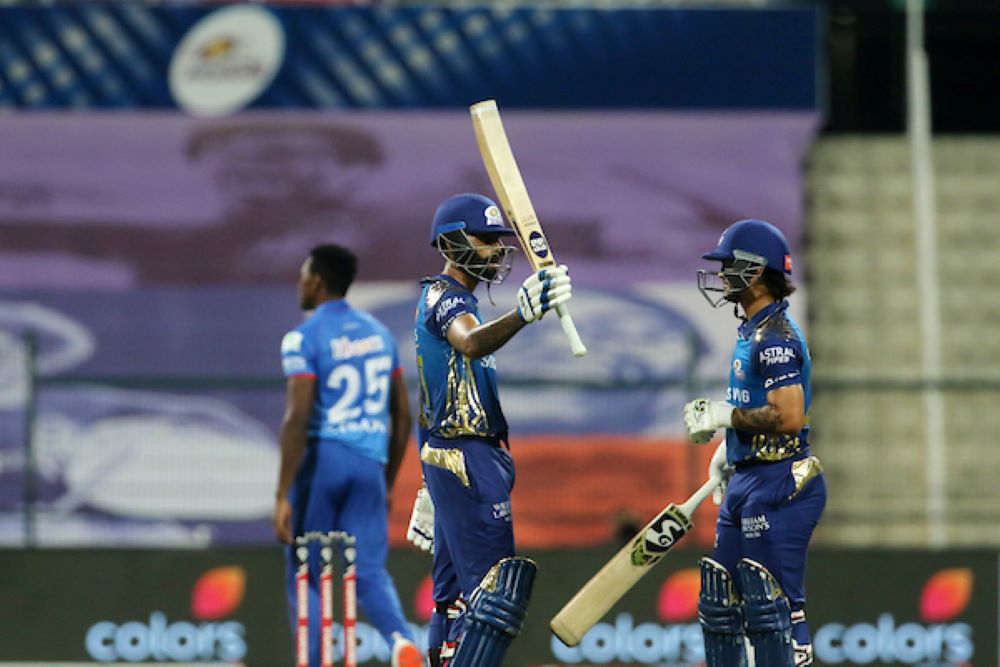 Suryakumar Yadav has proved to be a lynchpin in MI's batting line-up. Photo: BCCI

Batting at No. 3, Suryakumar Yadav has been the glue which held the Mumbai Indians innings together in absence of an injured Rohit Sharma during the business end of IPL. With an array of strokes at his disposal, Yadav has 461 runs in 15 matches and has been central to Mumbai’s huge totals. Delhi Capitals will be looking up to R Ashwin, who also bowls in powerplays, to restrict Yadav's run flow. Ashwin has 13 wickets from 14 matches.