IPL 2019, RR Vs CSK: Mitchell Santner Does A MS Dhoni By Finishing Off With A Six In Jaipur Thriller – WATCH

Needing three runs off the last ball to win, Mitchell Santner hits Ben Stokes for a six as CSK scripted a four-wicket win over RR in their reverse fixture of IPL 2019 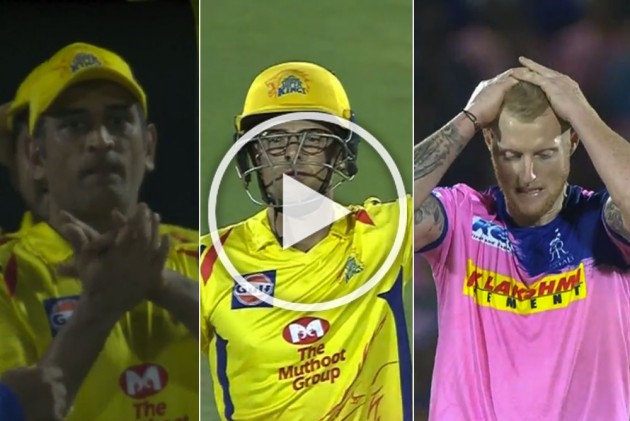 With Chennai reeling at 24/4, it was Mahendra Singh Dhoni and Ambati Rayudu who anchored their team's innings and took their side on the verge of victory before falling as Santner played a Dhoni to take the game away for the yellow brigade.

Dhoni Beats The Clock To Get DRS Call Right – WATCH

WATCH: Furious Dhoni Storms OnTo The Field After No-Ball Controversy

Chasing a modest 151-run target, Chennai were off to a worst possible start as they lost openers -- Shane Watson (0) and Faf du Plessis (7) --and Suresh Raina (4) with just 15 runs on board.

Rajasthan's medium pacer Jofra Archer turned things ugly for the visitors as he packed back Kedhar Jadhav on just a run as Chennai looked helpless at 24/4 before Dhoni and Ambati Rayudu stepped in and denied any further onslaughts to the home side.

The duo not only completed their fifties but also took Chennai to another victory before Stokes dismissed the duo with 18 needed in the last over.

Even after some umpiring flaws, which saw a fuming Dhoni coming in the middle and explaining his views to the umpires, it was Santner who smashed a last-ball six to seal the match for the yellow brigade.

Earlier, Chennai Super Kings rode on some disciplined bowling effort to restrict Rajasthan Royals to a modest 151/7 in their Indian Premier League (IPL) tie at the Sawai Mansingh Stadium, here on Thursday.