India took just 4.3 overs to wrap up the proceedings of the Boxing Day Test and beat Australia by 137 runs at the iconic Melbourne Cricket Ground on Sunday. 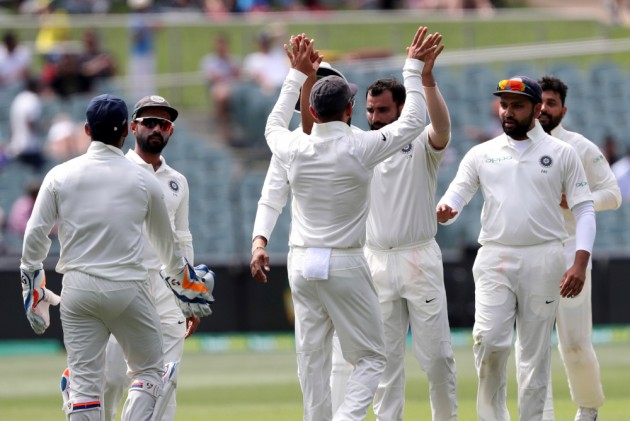 India took just 4.3 overs to wrap up the proceedings of the Boxing Day Test and beat Australia by 137 runs at the iconic Melbourne Cricket Ground on Sunday.

The play on final day started after a rain delay of nearly ninety minutes delay. But it lasted only 27 deliveries. Chasing an improbable target of 399 runs, Australia were bowled out for 261.

Ravindra Jadeja (3/82) and Mohammed Shami (2/71) also provided able support as Cummins' 63 was the highest score for Australia in either of the innings.

With that, India took giant strides towards winning their first ever series on Australian soil in seven decades. Taking an unassailable 2-1 lead in the four-match series, India will retain the coveted trophy even if the series is drawn level at Sydney as they have won the previous series at home in 2017.

After losing out the first session due to steady showers, Australia could only;y manage to add three runs to their overnight score of 258 for 8 as they were all out for 261 in 89.3 overs.

India thus won a Test match at the iconic MCG after 37 long years when Sunil Gavaskar's men beat Greg Chappell's side in the 1980-81 series.

Fittingly it was the legendary Kapil Dev, who had then played a major role taking five wickets in defending a low total while it was young Bumrah with match figures of 9 for 86, who was the hero on what looked like a docile track.

Bumrah got rid of Cummins (63), who edged to first slip and brought an end to his heroic effort in this Test.

Five balls later, Ishant Sharma got rid of Lyon (7), caught behind as Rishabh Pant took his 20th dismissal in this series, which is highest by any Indian wicket-keeper.

For Bumrah, 48 wickets in his debut Test season is highest by any pace bowler and also is a testimony to a lethal pace trio involving the veteran Ishant and the wily Shami, who also played his part well.

The trio has collectively taken 134 away wickets (Bumrah 48, Ishant 40 and Shami 46) in a single calender year eclipsing the 34-year-old record that stood in the name of the fearsome West Indies trio of Malcolm Marshall, Michael Holding and Joel Garner (130 wickets in away tours in 1984).

No wonder skipper Kohli was delighted and attributed their success to their ability to complement each other.

"We knew that it would be tough for Australia, but credit to our bowlers, especially Jasprit. The three fast bowlers have broken the record for most wickets by pacers in a calendar year for a team, which is brilliant," Kohli was all praise for his speed merchants.

"I certainly feel proud as a captain when they bowl in partnerships. No one is looking to out-bowl each other. Our first-class cricket is amazing, which is why we won. Credit must go to first-class set-up in India, which challenges our fast bowlers in India, and that helps them abroad," the skipper said.

Even Bumrah spoke about how India's first-class set-up has him a better bowler.

"My aim is to always focus on consistency. We train very hard and we are used to bowling a lot of overs in Ranji Cricket, so the body is doing well. My focus is on the next Test now," said Bumrah.

Having got only better since his debut in South Africa, Bumrah is hopeful that better things await for him in near future.

"It was always a dream to play Test cricket and I was really happy when I debuted in South Africa. I started learning slowly, in England it was a different experience. Coming to Australia has been a different experience as well. The start has been good, and hopefully, I will keep getting better," the bowler said.

Bumrah's skipper is confident that his men won't take their feet off the pedal and win the series 3-1.

"We are not going to stop here. This (win) will give us more confidence and we will play more positively in Sydney. I think we have been really smart in all the departments in the two matches that we have won," Kohli said.

"That is the reason we have at least retained the trophy but the job is not done yet. It's not finished at all. We want to win the last Test match as well, if an opportunity comes our way. We don't want to be complacent. We are all but ready for the final Test match," he added.

There was a bit of scare when the morning session was lost due to rain but Kohli said that he was not bothered about talks of not enforcing the follow-on.

"It's a good thing that I don't read any comments or what the opinions are. What matters is what we decide inside the dressing room as a team unit. We were pretty clear that we wanted to bat third on this pitch and wanted to get more runs as the pitch was only getting worse.

"I always felt the pitch had enough for the bowlers and a score around 400 will be extremely tough for Australia to chase down," the skipper said.