India Vs South Africa: In One Heated Moment, Furious Rohit Sharma Tells 'Errant' Navdeep Saini To Use His Head - WATCH

Defending a paltry total of 134 runs to win the three-match series in the third and final T20I match against South Africa, India needed a disciplined performance from their bowlers, including Navdeep Saini -- who failed to keep even the basics right thus angering vice-captain Rohit Sharma 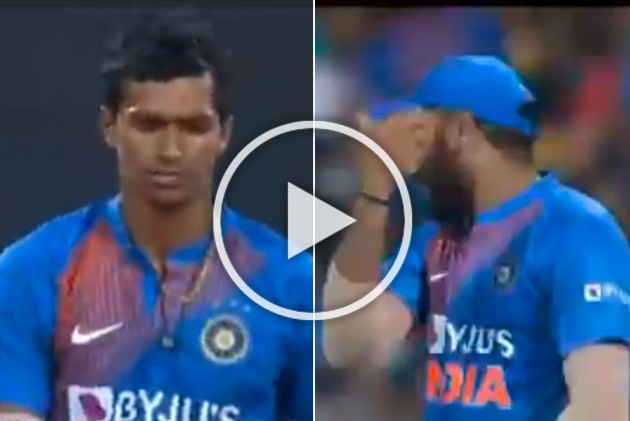 In one intense session of play during the third and final Twenty20 International match between India and South Africa at Bengaluru on Sunday, Rohit Sharma was seen losing his cool with Navdeep Saini conceding easy runs.

Defending a paltry total of 134 runs to win the three-match series, India needed a disciplined performance from their bowlers but went to lose the match by nine overs in a rather dismal performance.

In the 12th over of the South African innings, Saini conceded back-to-back fours with Temba Bavuma punishing the Delhi boy for his poor line. The South African lofted the fourth ball over extra cover for a four, then flicked the low full-toss on the leg for a four to deep mid-wicket for another.

Also Read: Can Rohit Sharma Do A Virender Sehwag?

Cameras used for the live feed then captured India vice-captain Rohit in a foul mood, gesturing to the bowler to use his head even as Shikhar Dhawan counsels the bowler at the bowling end. It sure was one intense moment considering the fact that Rohit is always regarded as one of the coolest leaders around.

India captain Virat Kohli had predicted a bright future for Saini after the Karnal-born claimed three wickets for 17 runs in his debut match against the West Indies last month.

On Sunday, Kohli won the toss and opted, rather strangely, to bat first at his 'home ground'. Saini, who plays for Kohli-led Royal Challengers Bangalore in the Indian Premier League, conceded 25 runs in two overs without success.

Proteas skipper Quinton de Kock played a brilliant unbeaten knock of 79 runs off 52 balls to guide the visitors to a comfortable win in just 16.5 overs. The result means that India and South Africa shared the honours, 1-1.