Quinton de Kock's unbeaten 79 and a solid show from Kagiso Rabada & Co helped South Africa to a comprehensive nine-wicket win over India in the third and final T20 at the M Chinnaswamy Stadium, Bengaluru on Sunday. The series ended 1-1. Catch highlights of India vs South Africa, 3rd T20 here 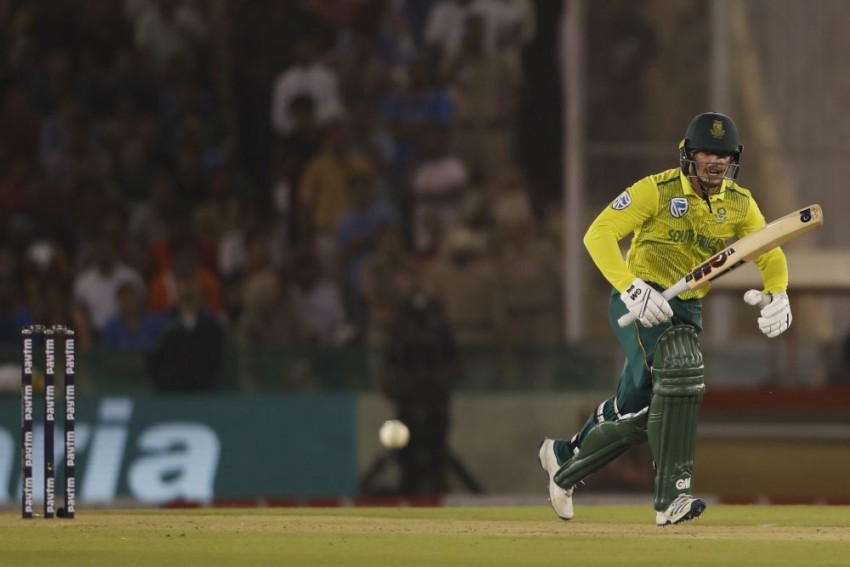 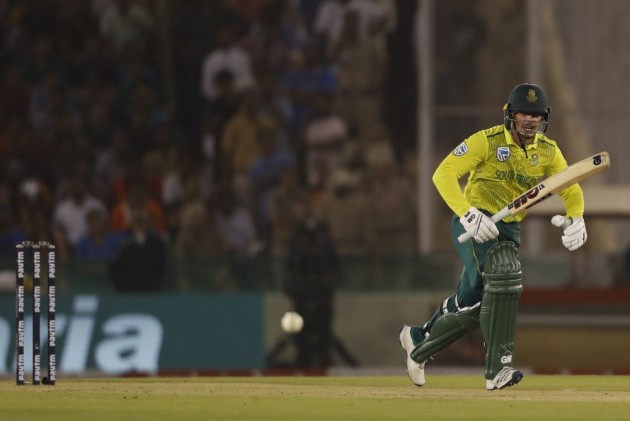 Skipper Quinton de Kock smashed an unbeaten 79 off 52 balls as South Africa defeated India by nine wickets in the third and final T20 at the M Chinnaswamy Stadium, Bengaluru on Sunday (September 22). After opting to bat first, India managed a below-par 134/ 9 on a batting-friendly track, with opener Shikhar Dhawan being the top-scorer with 36. While Kagiso Rabada took 3/39, it was left-arm seamer Beuran Hendricks' 2/14 that tilted things for the Proteas. In reply, the visitors batted sensibly and achieved the target in 16.5 overs. The series ended 1-1. Get highlights of India vs South Africa, 3rd T20 here (SCORECARD | CRICKET NEWS)

Virat Kohli: "Exactly what we wanted to do and that's going to be the template we'll follow for games we have before the World Cup. The mindset has to be flexible and to try out things when situations are stacked against us. We will have games like this where we don't execute what we want. But as long as the intent is there to improve, we'll be in a good zone. I think South Africa bowled well, the pitch suited them in the first innings and we weren't able to read the tempo of the game well."

Quinton de Kock, Player of the Series: "I think we kept it nice and simple. Focused on hitting a good length. Our spinners kept it tight too. Beuran bowled really well, he's got the skills. Sometimes it's better on these wickets to take the pace off."

Beuran Hendricks, Player of the Match: "It was just one of those games where things worked for me. I have bowled better than this. Lots of hard work put in behind the scenes, so happy with that. I don't really look at the pitch when we come out to warm up. Overhead conditions meant some swing, once I assess that, don't need to change much."

21:43 hrs IST: OUT! H Pandya removes R Hendricks, but there's no stopping De Kock, who completes a half-century. Has been an extremely good innings from the Protea skipper. Should aim to stay till the end. Temba Bavuma comes to the crease. South Africa are 86/1 after 11 overs. Saini comes back into the attack.

21:28 hrs IST: FOUR! Short of a length delivery from K Pandya, outside off, R Hendricks goes back and punches through cover. South Africa are 60/0 after 8 overs. De Kock 33*, R Hendricks 23*

21:07 hrs IST: FOUR! Shortish length from Chahar, gets it to swing away but it's too wide, R Hendricks stands tall and hits it through cover point. South Africa are 19/0 after 4 overs. De Kock 12*, R Hendricks 6*. Navdeep Saini comes into the attack.

21:02 hrs IST: FOUR! Too full from Sundar, and De Kock drives in the gap through extra cover. Jadeja tries his best but can't stop it from crossing the boundary. South Africa are 13/0 after 3 overs. De Kock 11*, R Hendricks 1*

20:58 hrs IST: Super over from Chahar, only one off it. Some swing for the Indian. Shades of Bhuvneshwar Kumar, who has been rested for the series. South Africa are 7/0 after 2 overs. De Kock 6*, R Hendricks 1*

20:52 hrs IST: FOUR! Touch full from Sundar, and De Kock times it through cover point for a boundary. South Africa are 6/0 after the first over. Deepak Chahar comes into the attack.

20:37 hrs IST: That's it. India finish on 134/9. Two scalps for Rabada in the last over and he finishes with 3/39. Credit to South Africa who pulled things back after a great start from Dhawan. We'll be back shortly with the Proteas' reply.

20:26 hrs IST: SIX! Length ball from Rabada, close to off stump, Jadeja smashes it straight back, high over the umpire's head for a maximum. Nine off the over. India are 118/6 after 18 overs. Jadeja 17*, H Pandya 6*. Phehlukwayo to bowl the penultimate over.

20:13 hrs IST: OUT! Short of length delivery from Hendricks, Krunal gets an outside edge through to de Kock. Ravindra Jadeja comes to the crease. India in all sorts of trouble. They are 99/6 after 15 overs. Phehlukwayo comes back into the attack.

20:03 hrs IST: WICKETS! Pant, Iyer fall in quick succession. Fortuin doing the job for De Kock. Another failure for the Delhi wicketkeeper-batsman. Needs to re-think about his shot selection. Pandya brothers are at the crease. India are 93/5 after 13 overs. Shamsi comes back into the attack.

19:56 hrs IST: SIX! Length ball from Pretorius, on leg stump, Iyer gets down on his back knee and scoops it over the fine leg boundary for a maximum. India are 87/3 after 12 overs. Pant 18*, Iyer 3*. Fortuin comes back into the attack.

19:51 hrs IST: Impressive over from Phehlukwayo, three off it. Turning out to be a good phase for the visitors. India are 79/3 after 11 overs. Pant 11*, Iyer 2*. Dwaine Pretorius comes into the attack.

19:43 hrs IST: OUT! Full from Rabada, on leg, and Kohli hits it high in the air, to deep square leg, and Bavuma, running to his left on the edge of the boundary, manages to keep his feet inside the rope and completes a neat catch. The India skipper didn't time it well. Shreyas Iyer comes to the crease. India are 73/3 after 9 overs.

19:37 hrs IST: OUT! Flighted delivery from Shamsi, Dhawan (36 off 25) comes down the track, wants to hit it over long-off, but the ball stops and turns and he slices it high in the air, and Bavuma takes a fine catch at extra cover. Rishabh Pant comes to the crease. India are 66/2 after 8 overs. Rabada comes back into the attack.

19:33 hrs IST: FOUR! Length delivery from Fortuin, on leg stump, Dhawan gets down on one knee and sweep it hard through backward square leg. India are 62/1 after 7 overs. Dhawan 36*, Kohli 5*. Shamsi again

19:28 hrs IST: SIX! Fuller from Shamsi, outside off, Dhawan takes a step forward and lifts this over long-on for a maximum. Shot! Expensive from the Chinaman, 13 off it. India are 54/1 after the end of Powerplay. Dhawan 30*, Kohli 3*. Fortuin comes back into the attack.

19:24 hrs IST: Another fine over from Hendricks, just six off it. Most importantly, no boundaries. India are 41/1 after 5 overs. Dhawan 18*, Kohli 3*. Tabraiz Shamsi comes into the attack.

19:20 hrs IST: FOUR! Length ball from Phehlukwayo, Dhawan stands still and punches it straight to the left of bowler. Costly over from the South African, 11 off it. India are 35/1 after 4 overs. Dhawan 16*, Kohli 2*. Hendricks to continue

19:14 hrs IST: OUT! B Hendricks strikes with his second ball of the series. Bit of inswing, Rohit (9) gets an outside edge and Reeza Hendricks does the rest at first slip. Virat Kohli comes to the crease. Magnificent over, a wicket and only two runs off it. India are 24/1 after 3 overs. Andile Phehlukwayo comes into the attack.

19:09 hrs IST: BACK-TO-BACK BOUNDARIES FOR ROHIT! The first one was creamed over cover, while the second delivery was timed well past the extra cover. Poor over from Rabada, 17 off it. India are 22/0 after 2 overs. Rohit 9*, Dhawan 6*. Beuran Hendricks comes into the attack.

19:03 hrs IST: FOUR! Too short from Fortuin, on leg stump, Dhawan pulls it away past short fine leg for his first boundary. Easy pickings! India are 5/0 after the first over. Kagiso Rabada comes into the attack.

19:00 hrs IST: Time for live action. Rohit Sharma and Shikhar Dhawan are at the crease. Bjorn Fortuin, left-arm orthodox, to open the attack.

18:31 hrs IST: India have won the toss and have opted to bat

18:15 hrs IST: One of the big names missing from India's squad is Kuldeep Yadav. But he's not too worried about not being picked for India's last two T20 series. Here's why

18:00 hrs IST: With Chinnaswamy one of the best six-hitting grounds, will Proteas skipper Quinton de Kock turn to either of Junior Dala or Beuran Hendricks, or will he play an extra spinner?

17:35 hrs IST: Meanwhile, former BCCI president N Srinivasan will maintain his stronghold over Tamil Nadu Cricket Association (TNCA) with his daughter Rupa Gurunath all set to become the first woman president of a BCCI affiliated unit during its AGM on September 26.

BIG NUMBER - Virat Kohli is set to complete “one thousand runs through fours in T20s at a single venue". So far, the India skipper has hit 249 fours and one more boundary would help him achieve the milestone.

17:19 hrs IST: The weather forecast doesn't look that promising in and around the Chinnaswamy, with rain expected throughout the game. Hope it stays away!

Shikhar Dhawan (India opener) - "While trying out youngsters, it is good to give them a good run because when new players come in, it takes time for them to express themselves.”

Rassie van der Dussen (South Africa vice-captain) - "We have young guys in the squad and we are not going to stand back from anyone. That's the emphasis. India are one of the strongest teams in the world and we are embracing that challenge.”

STAT ATTACK - Quinton de Kock has made 384 runs in 10 T20 innings at the venue, with two fifties and a century for Delhi Capitals against Royal Challengers Bangalore.

17:09 hrs IST: Hello and welcome to Outlook's coverage of the third T20 between India and South Africa.