India B Lift Deodhar Trophy On Back Of Kedar Jadhav, Shahbaz Nadeem

After posting 283/7 in the Deodhar Trophy final, courtesy well-compiled fifties by Kedar Jadhav and Yashasvi Jaiswal, India B bowlers -- led by Shahbaz Nadeem and Mohammed Siraj -- restricted India C to 231/9 to complete the victory 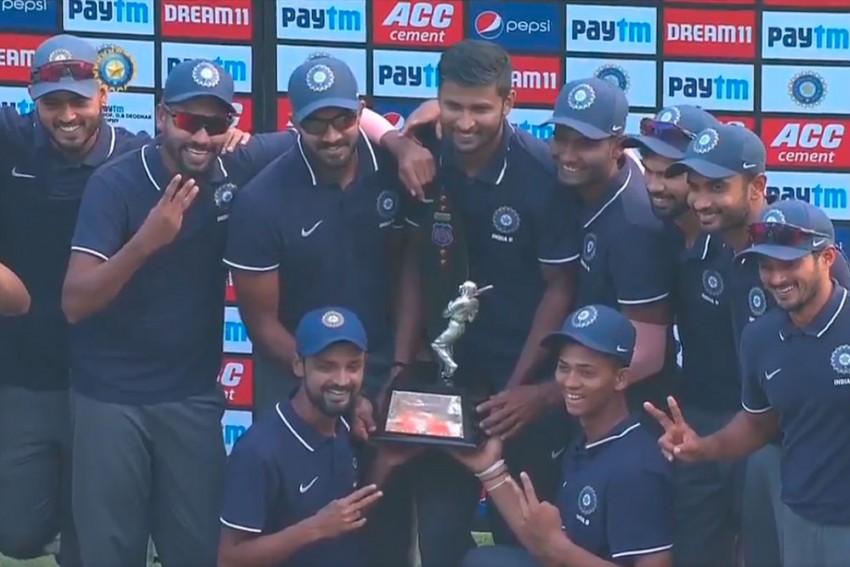 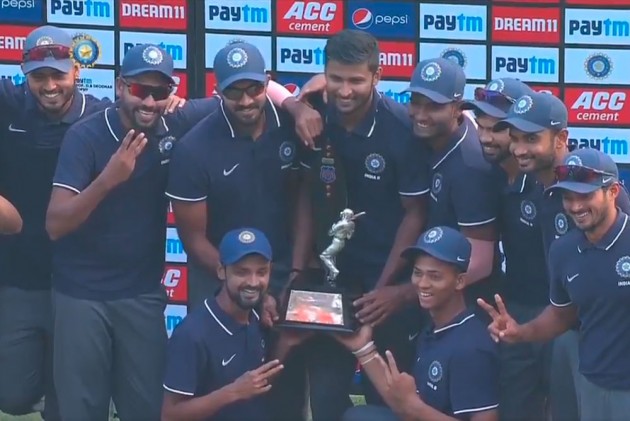 Kedar Jadhav conjured up a well-calculated 86-run knock before left-arm spinner Shahbaz Nadeem claimed four wickets as India B lifted the Deodhar Trophy with a comprehensive 51-run win over India C in the final, Ranchi on Monday. (More Cricket News)

Electing to bat, India B recovered from early jolts to post a competitive 283 for 7, courtesy well-compiled fifties by Jadhav and Yashasvi Jaiswal (54) and a 33-ball 45 from Vijay Shankar down the order.

For the uninitiated, Deodhar Trophy is an annual tournament among three national-level teams - India A, India B and India C. It is named after the Grand Old Man of Indian cricket, Prof. DB Deodhar.

The bowlers led by Shahbaz Nadeem (4/32) and Mohammed Siraj (2/43) then joined the party as India B restricted India C to 231 for 9 to complete the victory.

After Gill's departure, Mayank Agarwal (28) and Priyam Garg (74) added 54 runs before the opener was sent back by Nadeem in the 12th over.

In the next over, Virat Singh, who had scored a superb 76 in the last match, was run out by Ruturaj Gaikwad and Axar Patel, while Suryakumar Yadav too couldn't reach double figures after being bowled by Nadeem in the 16th over.

Dinesh Karthik (3) also disappointed as his stay lasted only 10 balls with India C slumping to 77 for five in the 18th over.

Last match's hero Axar Patel then joined hands with Garg and shared 63 runs. However, Garg became a victim of Siraj after he tried to play a big shot only to see his stumps disturbed.

Once Patel walked back to the hut in the 35th over, it seemed all over for India C.

Jalaj S Saxena (36 not out) and Mayank Markande (27) took the team across the 200-mark but scoring at more than 10 runs an over in the remaining over proved too tall a task for the tail-enders as India C ended their innings at 232 for 9.

Earlier, medium-pacer Ishan Porel (5/43) returned with a five-wicket haul but India B still managed to post a decent score on the board.

Porel struck early as India B lost opener Ruturaj Gaikwad (0) in the first over and then skipper Parthiv Patel (14) too was back in the hut in the ninth over as they slipped to 28 for two.

S Saxena then trapped Baba Aparajith (13) in the 21st over.

Jaiswal took the team close to the 100-mark even as he scored a 79-ball 54 which was studded with five boundaries and a six.

However, Axar Patel sent him packing in the 25th over with India B at 92 for four.

Nitish Rana (20) and Jadhav then shared 79 runs before Porel came back to get rid of the former as India B lost half their side for 171 in the 39th over.

Shankar then joined Jadhav and added 74 runs to take India B closed to the 250-mark.

Shankar smashed four boundaries and two sixes in his innings before falling to Porel. Jadhav was the last to go in the 50th over.