IND Vs ENG, 5th T20I, Live Streaming: When And Where To Watch Winners-take-all Cricket Match Between India And England 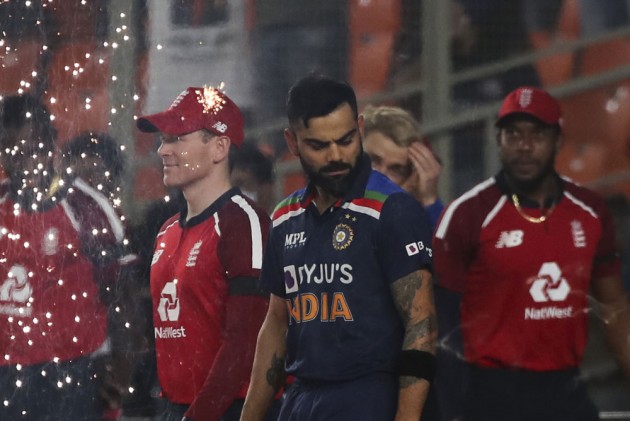 India held their nerve to level the Twenty20 series against England at 2-2 thanks to a thrilling eight-run triumph at the Narendra Modi Stadium, Ahmedabad on Thursday. Now, the top sides in the world will in the winners-take-all series finale. (More Cricket News)

India posted 185/8 after being put in by Eoin Morgan, despite Jofra Archer claiming 4/33, while fellow pace bowler Mark Wood impressed again, taking 1-25 from his four overs. However, for the first time in the five-match series, the team batting second were unable to reach their target.

Jason Roy made 40 at the top of the England order and Ben Stokes smashed 46 at a strike-rate of 200 runs per 100 deliveries, only to be dismissed within sight of a first half-century in the format at the international level.

Shardul Thakur dismissed Stokes and Morgan in successive deliveries at the start of the 17th over, yet it was all-rounder Hardik Pandya who was the pick of India's attack, finishing with figures of 2-16.

While Thakur was put under pressure when the equation of 23 runs from the final over was reduced to 10 off three balls, Archer's late boundary hitting was not enough for the tourists to snatch victory.

Suryakumar Yadav had earlier capitalised on the opportunity presented by an injury to Ishan Kishan, top-scoring with 57 from 31 deliveries for India. His innings included six fours and three sixes and proved crucial for the hosts, with openers Rohit Sharma (12 from 12 balls) and KL Rahul (14 from 17) once again struggling to gain momentum during the critical powerplay.

Virat Kohli had scored 150 runs without being dismissed in the previous two games, but India's captain was out for just one this time, beaten by a googly from Adil Rashid to be stumped by a distance. He finished the game off the field due to injury too, leaving Rohit in charge for the conclusion.

Rishabh Pant was also subdued in making 30, though Shreyas Iyer slammed 37 from just 18 deliveries to help compile comfortably the biggest total by either team in the series so far.

Head-to-head Record: This will be their 19th meeting in the shortest format of the game, and they share a 9-9 head-to-head record. In the last six matches, each side have won alternate clashes. Before that India had won three matches on the trot, and England doing the same before that.

Virat Kohli let Rohit Sharma take the reigns towards the end of the fourth match as the India captain failed to keep up or rather match the dropping "temperature". There was also concerns with Ishan Kishan's fitness. India will be tempted to bring in Kishan if he recovers, and fit-again Thanagarashu Natarajan. But why change a winning combination. Both KL Rahul and Rohit Sharma looked in great touch before getting out for low scores. And Suryakumar Yadav was brilliant in his first opportunity to bat for India.

For England, despite the defeat in the penultimate match, they are expected to field the same XI, which is their strongest.

Here are the likely XIs: