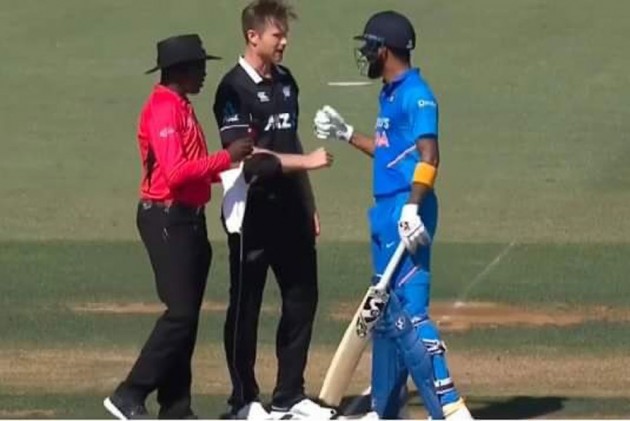 The International Cricket Council (ICC) on Wednesday joked that instead of Super Overs, teams can play "rock, paper, scissors" to decide the result of a match whenever it ends in a tie. (More Cricket News)

On Tuesday, New Zealand all-rounder Jimmy Neesham had posted a picture of himself and India's KL Rahul during the third ODI at the Bay Oval, Mount Maunganui which the hosts won by three wickets and swept the three-match series 3-0.

In the picture, both Rahul and Neesham can be seen doing a fist pump; however, Neesham captioned the post as: "Paper, scissors, rock".

The official Twitter handle of ICC re-tweeted the post of Neesham and wrote: "Perhaps we do this instead of super overs".

Rock paper scissors (also known as scissors rock paper, paper rock scissors and scissors paper stone) is a hand game usually played between two people, in which each player simultaneously forms one of three shapes with an outstretched hand. These shapes are "rock" (a closed fist), "paper" (a flat hand), and "scissors" (a fist with the index finger and middle finger extended, forming a V).

A player who decides to play rock will beat another player who has chosen scissors ("rock crushes scissors" or sometimes "blunts scissors"), but will lose to one who has played paper ("paper covers rock"); a play of paper will lose to a play of scissors ("scissors cuts paper"). If both players choose the same shape, the game is tied and is usually immediately replayed to break the tie.

The ICC had last year tweaked the Super Over rule for all its major events after the 2019 World Cup between England and New Zealand. In a nerve-wracking final last June, England beat New Zealand on the basis of scoring more boundaries (fours and sixes) in its allotted 50 overs and the Super Over combined.

Following the result, the ICC faced the wrath of fans and former players over the controversial rule.