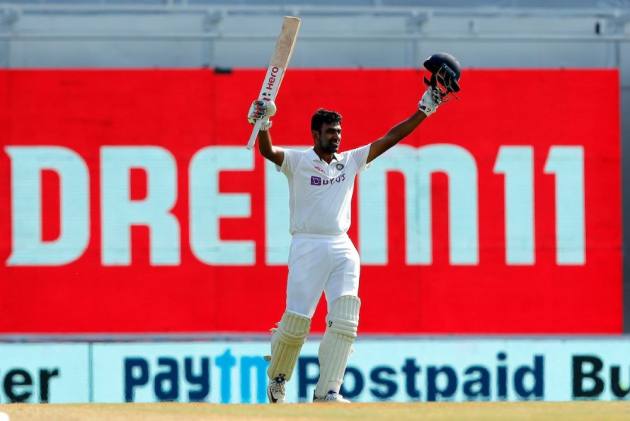 Amid the chatter around the challenging Chepauk pitch, Ashwin came in at number eight and showed everyone how to bat on a deteriorating surface with an excellent century, putting India on the brink of a series-levelling victory in the second Test against England here.

"I can't say it's been happening in the last three days, I have been practising with Vikram Rathore. I would love to credit him with how my batting has come through over the last four-five matches," Ashwin said at the end of the third day's play.

This was after his gutsy show with the bat in Australia, where he stood his ground despite hostile fast-bowling by the home team.

He was glad that he shone so bright in front of his home crowd.

"I don't know when the next Test is going to be here, but I am pleased. Don't know if I will play another Test in Chennai, and if at all, when..."

Ashwin's number eleven companion Mohammed Siraj celebrated the senior player's fifth Test hundred more than the man himself, who had got to a century in the company of Ishant Sharma in the past.

From the other end, Ashwin enjoyed watching Siraj strike a couple of sixes.

"In the past when, he's (Ishant) been with me when I got hundreds at home and once Siraj came, I knew how to approach.

"I was thrilled for his batting and told him to go through the line of the ball. It was amazing to see how excited he was when I got my hundred.

"I don't know what the team is feeling like but I am sure they are thrilled. I can't thank the crowd enough, they have been very supportive," Ashwin said.

After the defeat in the series-opener, the team management discussed ways to counter left-arm spinner Jack Leach, according to Ashwin, who was happy that the sweep shots came through well.

"I will sleep well through the night, that is all that I am thinking.

"Even after the last Test, we spoke about how we are going to counter Leach and probably bring sweep to the game.

"Last time I was sweeping, I was 19 years old, I hit a bit of sweep shots well today. I am thankful the plan has paid off. Sort of had a very good day."

A day before his magnificent effort with the willow (106 off 148 balls) on a pitch that has tested the skill and temperament of the best of batsmen from both sides, Ashwin returned excellent figures of 5/43 for his 29th five-wicket haul in the format.

Set an imposing target of 482, England were tottering at 53 for three at stumps on the third day, requiring 429 more runs to go 2-0 up in the four-match series.