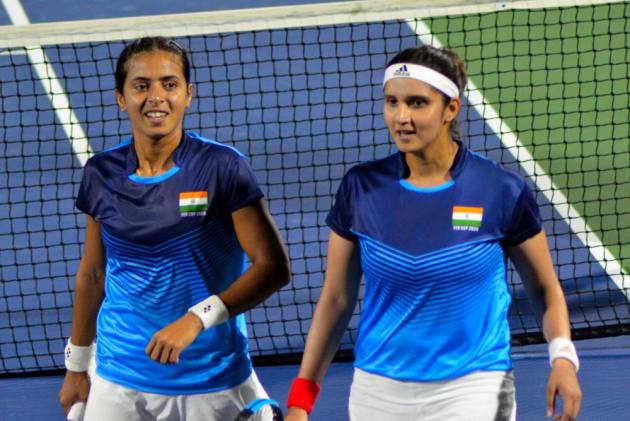 Rutuja Bhosale's win in the opening singles proved crucial as India beat Korea 2-1 to stay alive in the race for the Play-offs in the Fed Cup, on Thursday.

Rutuja edged out higher-ranked Su Jeong Jang 7-5 6-4 in the opening singles, to put India ahead 1-0 in the tie.

In-form Ankita was expected to seal the match but the gritty Indian lost the second singles rather tamely 4-6 0-6 to Na-Lae Han.

With the tie locked 1-1, India's most successful woman player Sania Mirza got to play her first match of the competition after four years.

Sania and Ankita joined forces to prevail over Na-Ri Kim and Han 6-4 6-4 in one hour and 39 minutes to clinch the tie for India.

The victory means that India have now moved to second place in the six-team Asia/Oceania Group I behind China, who are unbeaten in the tournament.

The top two teams will qualify for the Play-offs.

A big test awaits India on Friday when they clash with Chinese Taipei. A victory against them will more or less ensure India's passage into the Play-offs, to be held next month.