With 20 runs needed from the last two overs, Allen hit sixes from the first, third and last balls of the 19th over from Akila Dananjaya to get the West Indies home 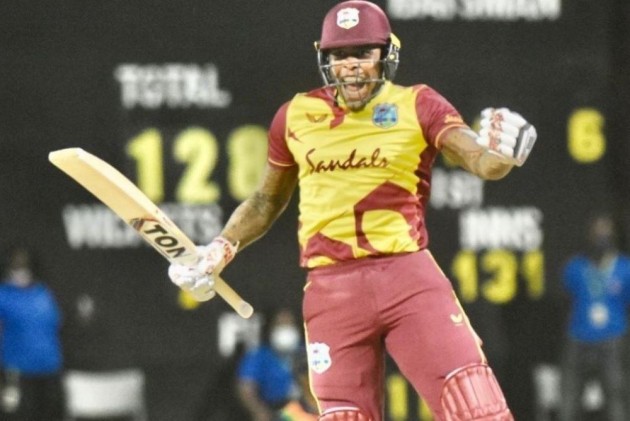 Fabian Allen hit three mighty sixes in the 19th over to help the West Indies to a series-clinching, three-wicket win over Sri Lanka in the third Twenty20 international. (More Cricket News)

Captain Jason Holder, cool and with a plan in mind, blocked out the 18th over, the last from dangerous spinner Wanindudu Hasaranga, save for a six from a free hit which helped break the mounting tension.

With 20 runs needed from the last two overs, Allen hit sixes from the first, third and last balls of the 19th over from Akila Dananjaya to get the West Indies home with an over to spare to clinch the series 2-1.

Allen hit 21 runs from six balls and also took 1-13 from four overs to earn player-of-the-match honors. He said there was no panic in the West Indies dressing room, even when it's biggest hitters failed to fire.

"We have a lot of batting power," Allen said.

"I told Jason Holder that I'm not comfortable batting against Hasaranga. So I told him to bat him out and I'll be finishing.

"I just backed myself in the end. It was a good performance overall."

The match was another low-scoring chapter in a low-scoring series in which all three matches were played on spin-friendly pitches at Coolidge. In the first match, the West Indies scored 134-6 to overtake Sri Lanka's 131-9. In the second, Sri Lanka's 160-6 was too good for the home side who were all out for 117.

For the third time in a row, Sri Lanka chose to bat on winning the toss on Sunday. The top-order faltered and Sri Lanka found itself with a constant need to reset or rebuild. After 10 overs, the tourists were only 46-4 and were under pressure to set a challenging total.

Dinesh Chandimal and Ashen Bandera stepped up to produce an unbroken partnership of 85 from 63 balls to lift Sri Lanka to 131 without further loss. Chandimal finished 54 not out from 46 balls and Bandera 44 from 35.

The West Indies made a solid start with Lendl Simmons (26) and Evin Lewis (21) putting on 38 for the first wicket. Both fell to Hasaranga, who set in motion a slump in the West Indies middle order.

Captain Kieron Pollard promoted himself to No. 4 in the hope of hitting the home team close to victory but was out for a third-ball duck. Chris Gayle followed after an unusually watchful 13 from 20 balls.

Nicholas Pooran made a promising 23 from 18 balls but followed Pollard in falling to paceman Dushmantha Chameera, who finished with 2-23 in unhelpful conditions.

Wrist spinner Lackshan Sandakan removed Rovman Powell (7) and Dwayne Bravo (0) with consecutive deliveries in the 17th over and the momentum of the match seemed to be moving in Sri Lanka’s favor until Powell hit his team home.

The first of three one-day internationals between the teams begins at the Sir Vivian Richards Stadium in Antigua on Thursday.