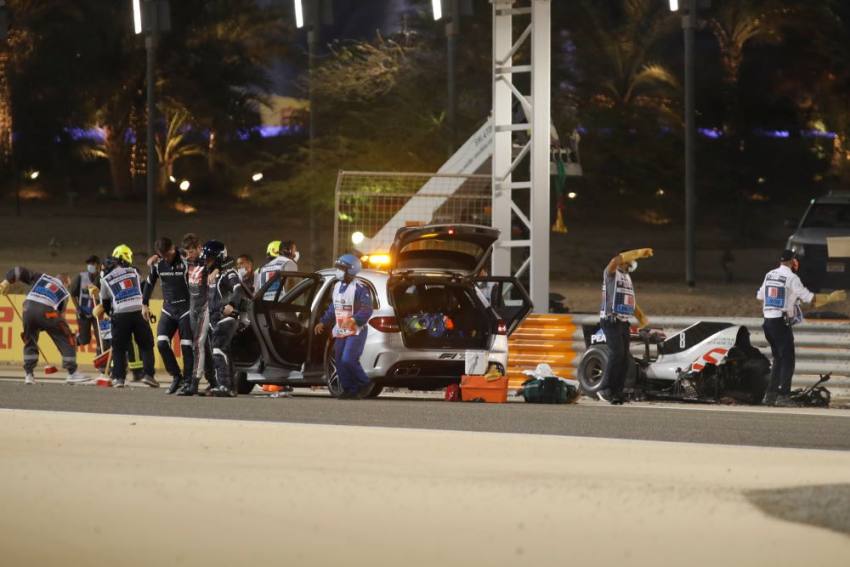 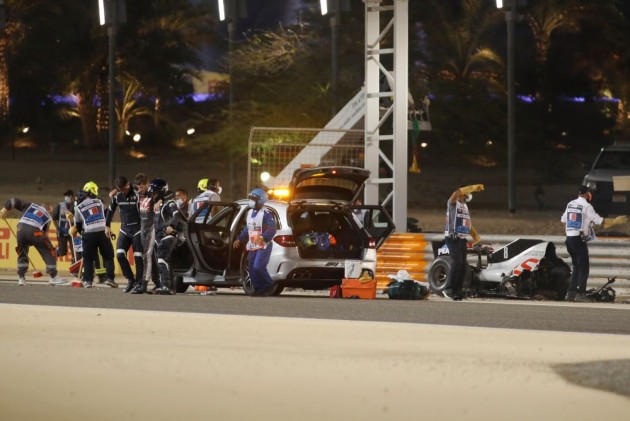 Formula One boss Ross Brawn hopes a "deep investigation" will uncover what caused Romain Grosjean's car to go through a barrier and burst into flames at the Bahrain Grand Prix.

Haas driver Grosjean suffered minor burns and suspected broken ribs after an extraordinary first-lap crash before he was taken to hospital for further checks on Sunday.

Having made contact with Daniil Kvyat, the Frenchman's car was split into two and engulfed in flames after a high-speed impact with the barrier.

We are so thankful that Romain Grosjean was able to walk away from this. We did not need a reminder of the bravery and brilliance of our drivers, marshals, and medical teams, nor of the advances in safety in our sport, but we truly got one today#BahrainGP ð§ð­ #F1 pic.twitter.com/z8OeTU5Nem

Grosjean managed to climb out with assistance from staff in the medical car, which was quickly on the scene.

Brawn believes the halo device saved Grosjean's life because a split in the barrier usually results in a fatality, with multiple current and former drivers since expressing relief and surprise the injuries were not more severe.

Romain has been voted as the #BahrainGP Driver of the Day.

The barrier split and subsequent fire worry Brawn, but he was delighted with the safety of the car.

"It's shocking for everyone in F1 to see an accident of that severity," he said. "We are not used to fire being involved as well.

"But I think it's a tribute to the work that the FIA and the teams have done over the years.

"We remember the controversy of the halo when it was introduced. And I have to give credit to [FIA president] Jean Todt, because he insisted that it should come through.

"The halo saved the day and it saved Romain. We might be looking at a different situation that we didn't have the halo. And for me, that's what prised, and managed to keep the barrier apart, when the car went through it.

"There was controversy in including it initially, but there can't be any doubt now - hats off to those pushed for its introduction.

"But I'm sure we'll have a deep investigation to understand what we can learn from it because seeing a barrier split like that is clearly not what we want to see.

"We haven’t seen anything like that for a very long time, but the barrier splitting normally results in a fatality."

So relieved that @RGrosjean is safe. Thanks to Dr Ian Roberts and the @FIA teams for their courageous and efficient intervention. We have always put safety at the top of our priorities and will continue to do so.#F1 #BahrainGP pic.twitter.com/64xubWCgUH

He added: "Credit to everyone. Clear thought, clear purpose. They didn't hesitate, they did exactly what they needed to do and you can't fault them.

"We are proud to have them all and it's very reassuring for the drivers to see that level of professionalism, and that response. From that respect, I think it was perfect.

"Obviously, we don't want to see an accident like that. But in terms of the response I can't really think there could have been anything more effectively done."

The race was red-flagged immediately after Grosjean's crash.

A long delay followed as the barrier was repaired, with Lewis Hamilton winning his fifth straight grand prix when the race eventually restarted.