Runaway championship leader Lewis Hamilton closed in on yet another title by winning at Imola despite a poor start. 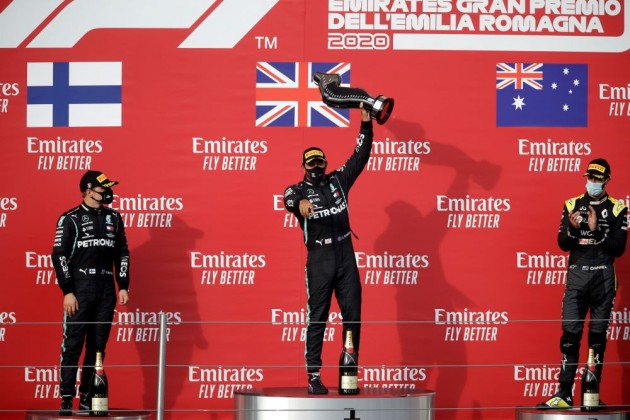 Lewis Hamilton won the Emilia Romagna Grand Prix as Mercedes wrapped up a record seventh consecutive constructors' title with another one-two after Max Verstappen spun out.

Hamilton dropped from second to third behind Max Verstappen before the first corner, but the combination of a strategy call and the deployment of the virtual safety car put the runaway championship leader in command of the race.

Valtteri Bottas, who started on pole, pitted on lap 20 of 63 at Imola just after Verstappen, who was in second place at the time, for a switch from medium to hard tyres.

Hamilton stayed out for a much longer stint on mediums and built up a big lead before a timely, brief deployment of a virtual safety car when Esteban Ocon retired on lap 31 played right into his hands.

The six-time Formula One world champion pitted and went on to seal victory, with Bottas second after Verstappen's race was ended by a puncture on lap 52 in a dramatic twist.

MAKING @F1 #HIS7ORY! WE ARE CHAMPIONS OF THE WORLD FOR A SEVENTH TIME!! pic.twitter.com/FqAHS6yYza

Verstappen had capitalised on a mistake from Bottas, who suffered floor damage, to move into second on lap 43 but ended up in the gravel and George Russell crashed out behind the safety car soon after.

Hamilton and Bottas pitted for soft tyres and the Brit, who broke Michael Schumacher's record of 91 F1 race victories last weekend, saw out another win following a restart with just six laps to complete.

Daniel Ricciardo took third place behind Bottas as Mercedes celebrated yet another title, with Hamlton closing on being crowned champion for a record-equalling seventh time with four races to go.

Daniil Kvyat took fourth spot in a frantic finale, with Charles Leclerc completing the top five in a chaotic first F1 race at the iconic Italian track since 2006.

Pierre Gasly dropped from fourth to fifth and much worse was to come when he was forced to retire on lap eight when his AlphaTauri suffered a drop of water pressure early on.

It was an all-too familiar story for Bottas as he was unable to convert pole into a victory. The Finn did not get off to the greatest start, but was controlling the race nicely before he was called in just after Verstappen for a change of tyres.

Hamilton was flying out in front after being informed by the team they would be "extending" and Bottas was passed by Verstappen when he locked up under pressure after the virtual safety car was called for a very short period.

Damage to Bottas' car was also a concern, so in the end second place was the best he could have hoped for as Hamilton extended his lead to a mammoth 85 points on a day, with Mercedes wrapping up constructors' title number seven.

RICCIARDO REVELS IN ANOTHER PODIUM

Renault driver Ricciardo was on cloud nine after securing a podium finish at the Eifel Grand Prix. The Australian now has two third-placed finishes in the last three races after Verstappen's misfortune put him back on the podium, and Ricciardo was drinking champagne from his shoe again after an unexpected top-three finish.

He sits fourth in the driver standings, 10 points better off than Leclerc. Renault are up to third in the constructors' standings, a point ahead of McLaren and Racing Point.

Jubilation as @LewisHamilton crosses the line to win at Imola

And a 1-2 clinches a seventh straight constructor title for @MercedesAMGF1 #ImolaGP #F1 pic.twitter.com/7Y0Fs2K97R

Hamilton could match Schumacher's record haul of seven F1 world titles at the Turkish Grand Prix in a fortnight.