Simon Taufel, who umpired during Virender Sehwag's triple century in Multan Test in 2004, recalls his ties with the atypical opener 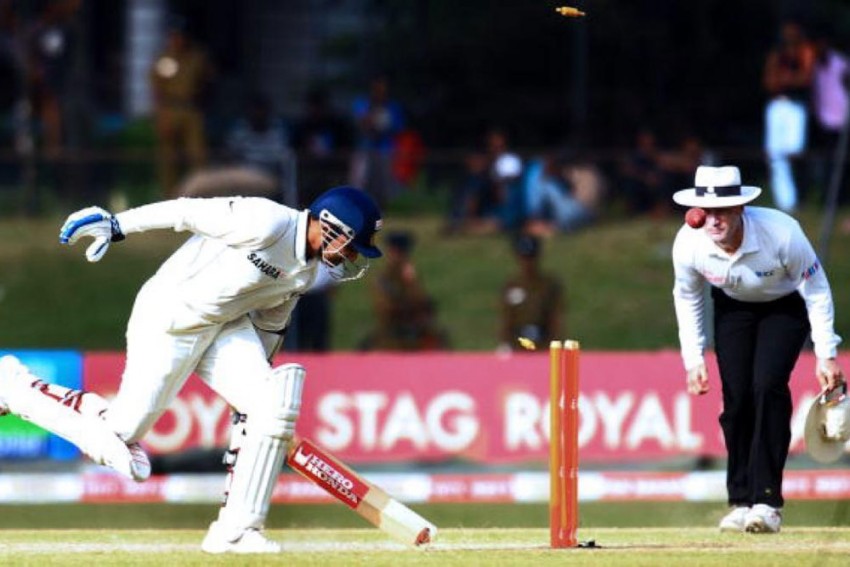 While recalling the matches played by Virender Sehwag, including the 2004 Multan Test in which he scored the historic triple century against Pakistan, Simon Taufel, the most-decorated international umpire, says the Indian would hardly get “emotionally hijacked” by his own success/failure and remembers his “cheeky humour”.

It was Taufel who signaled Sehwag's six, off off-spinner Saqlain Mushtaq, that helped him complete his triple century. “I always enjoyed umpiring and working with players like Sehwag. He had an excellent temperament – he could score 300 or 0, and he would be the same person standing next to me at square leg. He very rarely got emotionally hijacked and his cheeky humour always shone through,” Taufel told Outlook exclusively from Australia, a day after the 16th anniversary of Sehwag’s 309 in India’s first innings of the first Test against Pakistan on March 29, 2004.

“I was very lucky to have umpired that match in Multan with David Shepherd and [referee] Ranjan Madugalle -- both good men and strong in a crisis. Their experience helped me a lot in a significant series like this,” says the 49-year-old Aussie who later also officiated in Tests in which Pakistan’s Younis Khan and West Indian Chris Gayle scored triple centuries.

As Taufel raised his hands over his head to signal the six, hit over long on, Sehwag punched the air and hugged his batting partner Sachin Tendulkar as he celebrated becoming the first-ever Indian to score a Test triple century. But Taufel prefers to remain modest. “I did not remember that one of my signals was responsible for Viru’s triple hundred. My notes tell me that Sourav Ganguly was ruled out of the match with injury and Rahul Dravid took over as captain,” says the man who won five successive ICC’s Best Umpire Award, starting 2004.

Taufel also informed that he used to make notes while officiating matches, and to answer my questions he dug into some of those to recall the events of the Multan Test. And he also pointed out that he always kept a distance with players, as per the requirement of his task – remain neutral at all times. “I tended not to get involved in a player’s skill during a game and focussed only on what myself and my umpiring team needed to do. I do though, remember Viru’s achievement as a triple century is significant, so much so, that I did not remember Sachin Tendulkar’s 194 not out [in the same innings],” he says.

“What stood out for me on that first day of the match was the 150 opening partnership [between Sehwag and Aakash Chopra] and how Viru scored so quickly and played positive cricket – anyone who scores 228 not out in a day of Test cricket would have played top attacking cricket,” he said, referring to the first innings that India declared at 675 for five on the second day.

Did Taufel congratulate Sehwag after he reached the coveted mark? “I don’t recall so, but I’m sure I would have given him a wink and well done message as I would normally do when a player achieved something special. Viru’s triple was the first time a player had done this in one of my matches -- followed by Younis Khan [Pakistan vs Sro Lanka, Karachi, 2009] and Chris Gayle [West Indies vs South Africa, St John’s, 2005],” he says.

Aside from Sehwag’s Test triple century in Multan, Taufel disclosed, with tongue firmly in his cheek, an interesting anecdote inside the umpires’ room during the match. Digging into his diary notes, he recalled: “We must have had a ‘welcome’ sign on our door at lunchtime as Navjot Singh Sidhu and Imran Khan decided to join us for lunch – our food must have been better than that offered to the commentators. Some of you might know Sidhu’s commentary. He is famous for quotes like ‘Tendulkar played that shot up on this toes, like a midget in a urinal’. His quote for our lunch was about Pakistan’s bowlers – ‘It’s not that bad, it’s worse!’”

Well, the Pakistani bowling attack was not at all as bad as Sidhu tried to make you believe. It comprised quality speedsters Shoaib Akhtar, Mohammad Sami, Shabbir Ahmed, and Abdul Razzaq, and a world-class off-spinner in Saqlain Mushtaq. It was the performances of Sehwag, Tendulkar, Anil Kumble, and Irfan Pathan that made the vital difference between the teams as India won the Multan Test by an innings and 52 runs.