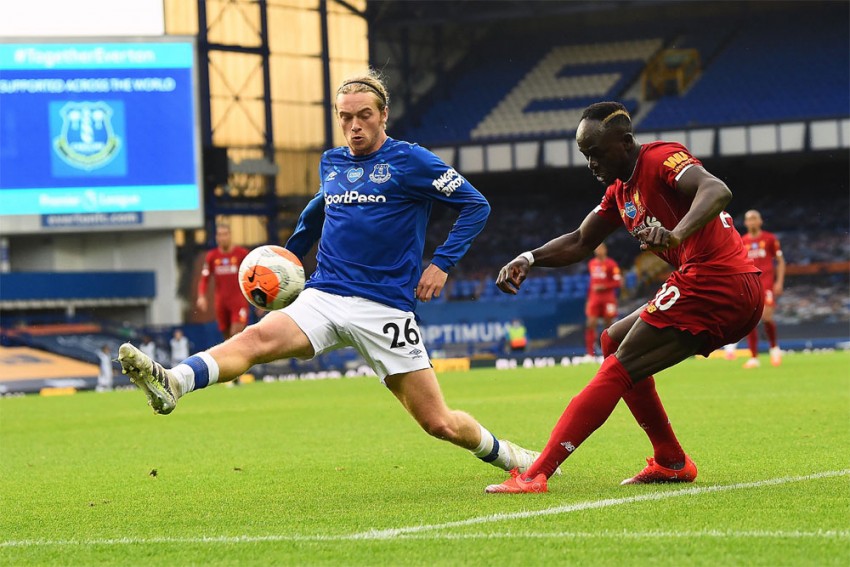 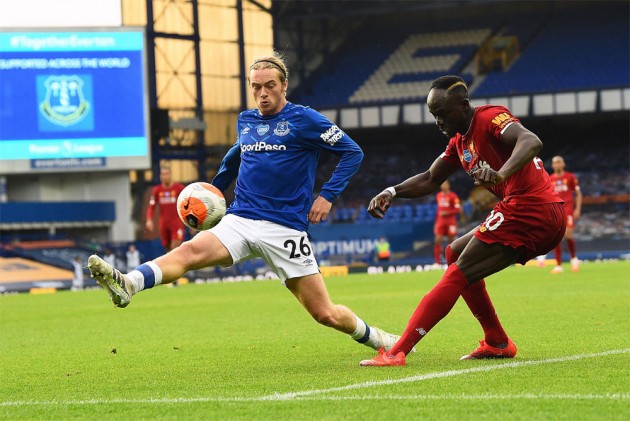 Liverpool edged closer to their first league title in 30 years but were frustrated by an obdurate Everton in a 0-0 derby draw at Goodison Park. (More Football News)

The Toffees are now winless in 19 Premier League matches against their local rivals, although that statistic did not appear to weigh upon Carlo Ancelotti's approach as his side offered scant attacking threat.

They still came closest to breaking the deadlock 10 minutes from time, though, as Tom Davies hit the post after Alisson had kept out Dominic Calvert-Lewin's clever flick.

Jurgen Klopp left Mohamed Salah unused on the bench and his team need five more points to become champions, although that equation will change if Manchester City fail to beat Burnley on Monday.

An early error from Fabinho let Richarlison loose to flash a shot across the face of Alisson's goal.

Everton centre-back Michael Keane, booked for an earlier foul on Mane, produced a vital block to thwart Minamino before half-time, by which point Liverpool had lost James Milner to a hamstring injury and sent on Joe Gomez.

Everton had a flurry of late chances but the Merseyside derby finishes goalless#EVELIV pic.twitter.com/0oDTqdbZ00

It made Richarlison's shank into the Gwladys Street End with Virgil van Dijk breathing down his neck all the more frustrating.

Trent Alexander-Arnold had a 63rd-minute free-kick deflected over before Joel Matip joined Milner on the injury list.

In the context of a dour contest, Everton launched a stirring late rally, Davies agonisingly close to snatching glory and Alisson frustrating his compatriot Richarlison once more after Calvert-Lewin sent a diving header wide.

What does it mean? Liverpool made to wait

Not that they will mind at all, but Liverpool could still end next week without being crowned Premier League champions.

When they are, their success should be remembered in the context of what came before the coronavirus pandemic. This soulless encounter was very much at odds with the finest moments Klopp has crafted on Merseyside.

No shame for Seamus

It might only be one win in 15 attempts now, but Seamus Coleman is still an Everton player who knows what it feels like to beat Liverpool. The experienced captain led by example at right-back, with two inch-perfect challenges on Gomez and Mane early in the second half crucial when it came to preserving parity.

Klopp said the extended training period before the Premier League restart had been useful for January recruit Minamino. A surprise inclusion ahead of Salah, who is still short of match fitness, the former Salzburg forward showed some nice touches and enjoyed a couple of half chances, but the opportunity to make a statement passed him by. Alex Oxlade-Chamberlain replaced Minamino for the start of the second half .

- Seven of the last eight Merseyside derbies played at Goodison Park in the Premier League have ended level.
- Liverpool have now gone 22 games without defeat against Everton in all competitions since a 2-0 loss at Goodison Park in October 2010 (W11 D11).
- Everton are the only Premier League side to remain unbeaten on home soil in 2020 across all competitions (P5 W2 D3 L0).
- Jurgen Klopp has managed more games against Everton in all competitions without defeat than against any other opponent in his managerial career (P11 W7 D4).
- The average age of Everton's starting XI was 24 years and 356 days – their youngest starting line-up for a league match against Liverpool since February 1986 (24 years and 250 days), when they won 2-0 at Anfield.

A stunning title triumph may still be completed when Liverpool host Crystal Palace on Wednesday, with Everton on the road at bottom club Norwich City.