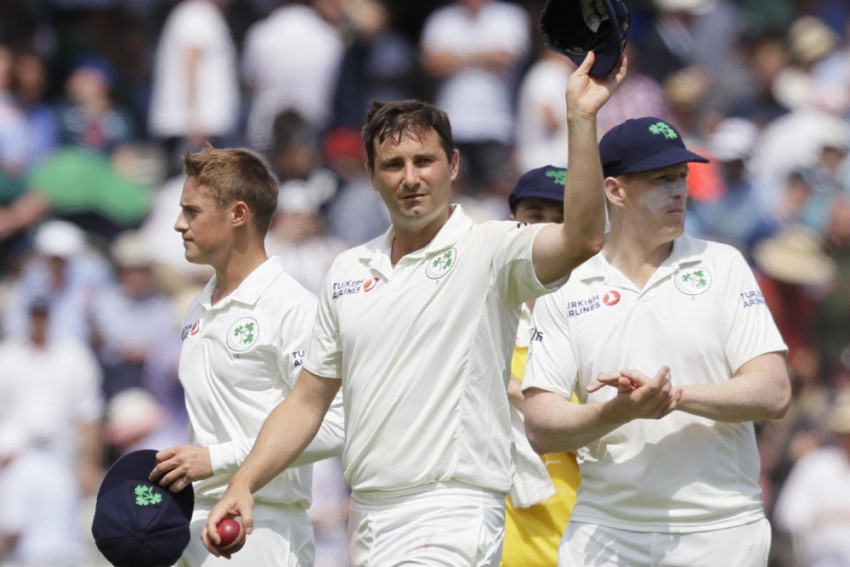 Ireland's Tim Murtagh holds up this hat to applause as he leaves the pitch after England are all out for 85 during the first day of the four-day Test match at Lord's cricket ground in London on July 24, 2019.
AP Photo
Omnisport 2019-07-24T18:18:34+05:30 England Vs Ireland, One-Off Test: Magnificent Tim Murtagh Takes Five As IRE Bowl ENG Out or 85 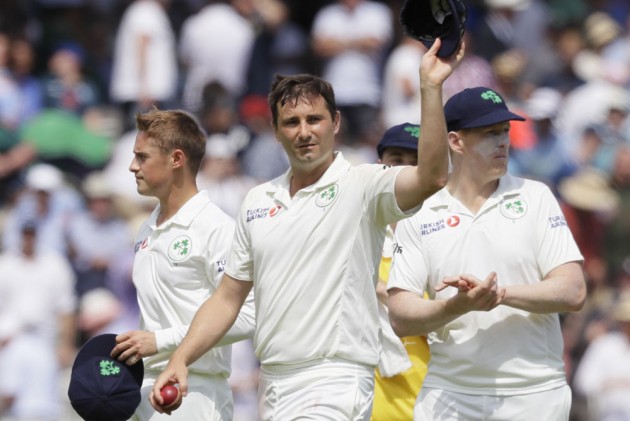 England's Ashes preparations quickly hit the rocks as they were incredibly all out for 85 against Ireland in a humiliating start to this week's Test.

Three Cricket World Cup heroes went for ducks, Jason Roy made just five on debut and captain Joe Root added only two as the stunned hosts failed to make it to lunch at Lord's.

Tim Murtagh took figures of 5-13, earning his place on the honours board, as Ireland made hay in their first Test at the home of cricket.

The remarkable scenes should offer serious encouragement to Australia, themselves and Australia A meanwhile struggling with the bat in Southampton.

England looked to have recovered from Roy's shaky start that saw him edge to Paul Stirling in the slips, but Joe Denly, top-scoring on 23, went lbw to Mark Adair (3-32) to spark an astonishing collapse.

Rory Burns was caught behind for six and Adair got Root lbw before a remarkable run of ducks for England's ODI stars.

Jonny Bairstow was superb in the World Cup but his stumps were destroyed by Murtagh, who trapped Chris Woakes lbw - the review going with the umpire's decision - two balls later in a stunning two-wicket maiden.

Moeen Ali was caught behind and suddenly England were forced to work hard to avoid their record-low Test score (45 against Australia in 1887), doing so with boundaries met with sarcastic cheers.

The home side's fortunes did not improve, though, as Boyd Rankin (2-5) got a nick from Stuart Broad, before Sam Curran sent the same man to James McCollum at short leg.

Olly Stone, another debutant, got to 19 before Adair skittled him and England's innings was cut embarrassingly short just before the end of the session.

"I'm not quite sure what's happened over the past two hours, to be honest," Murtagh told Sky Sports.

MS Dhoni And His Number: Will BCCI Retire Jersey No 7 Ahead Of ICC World Test Championship?