Bayern Munich made tough work of it but Robert Lewandowski and Thomas Muller had Die Roten back to winning ways against Freiburg. 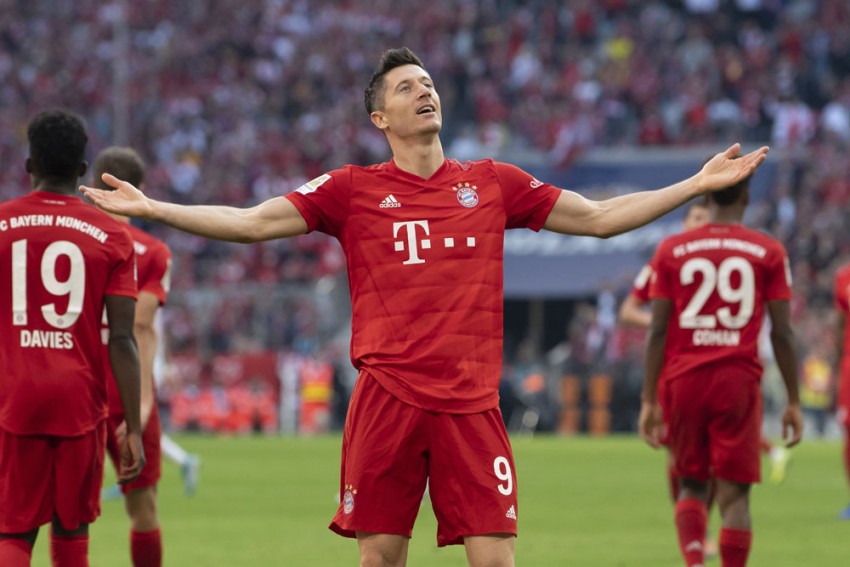 Robert Lewandowski made more history and Thomas Muller was on target as Bayern Munich battled to a 2-1 win over Freiburg at the Allianz Arena. (More Football News)

Prolific Pole Lewandowski became the first player to score 21 goals in the first half of a Bundesliga season with a seventh-minute opener in Sunday's contest.

Bayern were coasting until substitute Nils Petersen caught the hosts cold just after the hour but the ever-reliable Muller side-footed home to restore the lead.

Petersen was denied another dramatic equaliser by the crossbar in injury time as Bayern, who followed a 3-2 loss against Borussia Monchengladbach with a shoot-out loss to second-tier Holstein Kiel in the DFB-Pokal on Wednesday, ultimately made it over the line.

21 - Robert Lewandowski (fcbayern_en) becomes the first player to score 21 goals in the first half of a season in the @Bundesliga_EN. Record. pic.twitter.com/S3SbNiEdWW

Freiburg had already lost Baptiste Santamaria to injury and survived a VAR scare by the time Muller teed up Lewandowski to clinically fire home at the end of a slick Bayern move.

Serge Gnabry twice tested the waters either side of Roland Sallai scuffing wastefully wide for Freiburg, while Leroy Sane – who replaced the injured Gnabry after 28 minutes – should really have hit the target with an edge-of-the-box effort.

Lewandowski saw a close-range effort deflected onto the crossbar just before the hour with Leon Goretzka's follow-up parried to safety.

Freiburg equalised from nowhere shortly after when Petersen stooped low to head Nicolas Hofler's flick-on over the line just 16 seconds after coming on as a substitute.

Parity did not last too long, though, as Muller coolly swept home into the bottom-right corner with 16 minutes remaining.

Lewandowski was denied one-on-one by visiting goalkeeper Florian Muller and the hosts' profligacy almost proved costly when Petersen smashed an effort against the woodwork in the additional minutes.

What does it mean? Gap opening up but more clean sheet woes for Bayern

Bayern's win means they now lead RB Leipzig by four points at the top of the table. However, Flick's men have now conceded in 11 straight top-flight games and the coach will be keen to arrest that stat.

It's Gerd to be the king! Lewandowski overhauls Muller's record

Lewandowski has taken just 16 league games to reach 21 goals, with Bayern legend Gerd Muller having previously set the benchmark of 20 after 15 in the 1968-69 season.

He now has five goals in his past four games against Freiburg, while he had six shots in total and finished with two key passes.

Freiburg had their moments but could easily have been further behind by the time Petersen entered the fray. He finished with a goal and a key pass, while the smallest of margins denied him and Freiburg at the close. It was some impact.