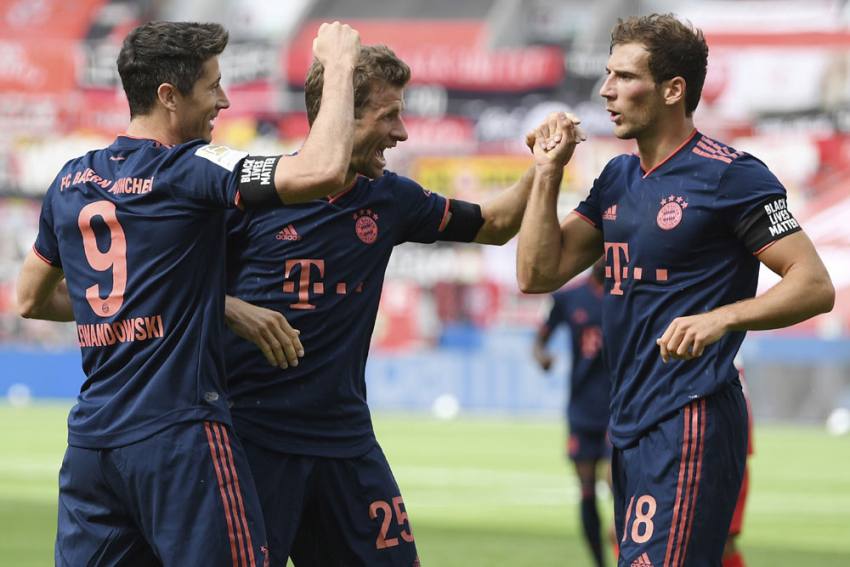 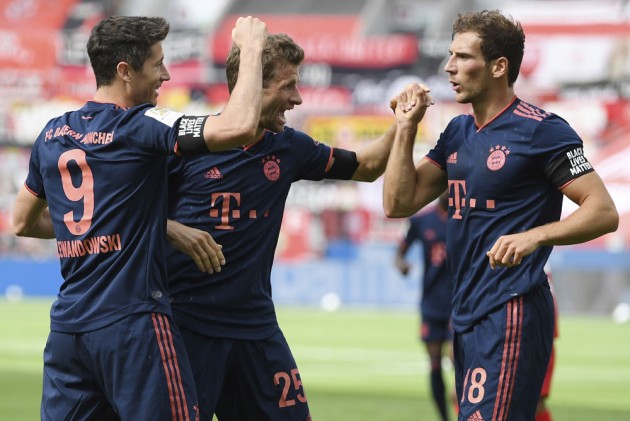 Hansi Flick's side - wearing 'Black Lives Matter' armbands - looked rusty during the opening exchanges on Saturday yet rallied to overpower their hosts and go 10 points clear of Borussia Dortmund at the summit.

It all began so well for Leverkusen, who opened the scoring early on through Lucas Alario, but they capitulated and conceded three goals in less than 20 minutes – Kingsley Coman, Leon Goretzka and Serge Gnabry all punishing the hosts.

Lewandowski added a fine header to set a new personal best of 44 goals in a single season, turning in a cross from Muller, who equalled the Bundesliga assists record for a solitary campaign.

Despite not being able to call upon Kai Havertz, missing with a muscular issue, Leverkusen began positively and deserved the lead nine minutes in – Alario prodding past Manuel Neuer after being released by Julian Baumgartlinger.

But their confidence soon vanished and Bayern duly restored parity just before the half-hour mark, Coman slotting past Lukas Hradecky after Goretzka robbed Moussa Diaby to set up his team-mate.

Leverkusen then fell apart late in the half. Goretzka rounded off a well-worked move with a left-footed effort that squeezed under Hradecky's hand, while Gnabry lobbed the goalkeeper to make it 3-1 after a punt up the pitch by Joshua Kimmich.

Peter Bosz took the drastic step of making three changes at half-time, and while chances became slightly harder to come by for Flick's team, Leverkusen did not improve a great deal going forward.

Bayern looked the more threatening and eventually got a fourth just past the hour – Lewandowski belatedly getting in on the act with an emphatic header from Muller's pinpoint cross.

Florian Wirtz, who was introduced at the break, opened his Leverkusen account in style with a curling effort late on to become the Bundesliga's youngest ever scorer at 17 years and 34 days, but it was a mere consolation for the hosts.

What does it mean? Bayer's remorse

While Bayern's place at the top was secure regardless of the result, this was an opportunity – albeit a difficult one – for Leverkusen to take charge in the race for fourth after Borussia Monchengladbach's 1-0 defeat to Freiburg on Friday.

They could not do so, though, meaning they remain fifth and outside of the Champions League spots. As for Bayern, they strengthened their grip on the title.

It was another wonderful performance from the Bayern maestro. He teed up Goretzka in the first half and then supplied a lovely assist for Lewandowski to take his tally to 20 for the campaign, matching Kevin De Bruyne's Bundesliga record.

It was a difficult day for Leverkusen, particularly their attackers. Diaby was woeful, his end product proving continuously frustrating, but at least he was lively. Leon Bailey, in contrast, offered little before he was withdrawn at half-time.

Bayern return to the Allianz Arena for their DFB-Pokal semi-final against Eintracht Frankfurt on Wednesday, then host Borussia Monchengladbach in the Bundesliga three days later. Leverkusen are also in cup action in midweek, against fourth-tier Saarbrucken on Tuesday, and then go to Schalke at the weekend.