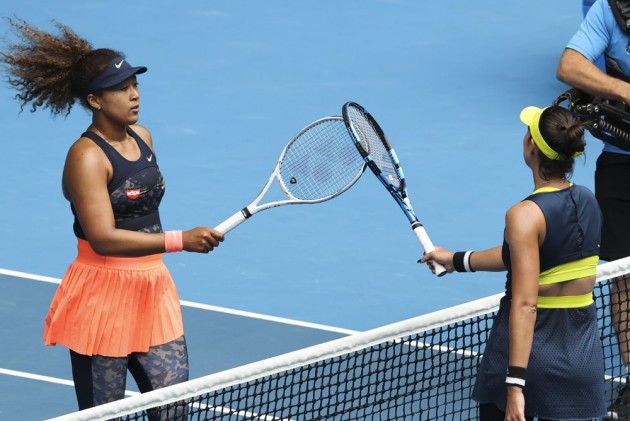 Former Australian Open champion Naomi Osaka saved a pair of match points as she emerged from the jaws of defeat to sensationally prevail against Garbine Muguruza en route to the quarter-finals. (More Tennis News)

Osaka moved through to the last eight in Melbourne for the second time in three years after the Japanese star and former world number one rallied past two-time grand slam champion Muguruza 4-6 6-4 7-5 on Sunday.

Muguruza – last year's runner-up at Melbourne Park – led 5-3 and was up 40-15 on Osaka's serve in the final set before the latter reeled off four successive games to complete a great escape on Rod Laver Arena.

Winner of the Australian Open in 2019, third seed Osaka had been down 6-4 2-0 earlier in the match when she mounted an improbable fightback against the Spanish star.

WHAT A MATCH!@naomiosaka saves match points to reach the final eight with a 4-6 6-4 7-5 win over Muguruza.#AusOpen | #AO2021 pic.twitter.com/m6oDjzaGWu

It was a milestone moment for Osaka as the three-time major champion celebrated her 50th grand slam victory and extended her winning streak to 18 matches, dating back to February last year after the coronavirus pandemic halted the WTA Tour season in 2020.

Next up for Osaka is Taiwanese veteran Hsieh Su-wei for a spot in the semi-finals.