India will have their mindset elsewhere though, pertinently the experimentation cycle ahead of the T20 World Cup in Australia. The fourth T20I Vs New Zealand was a step in that direction, but it mostly came with the likes of Sanju Samson and Shivam Dube wasting their opportunities. 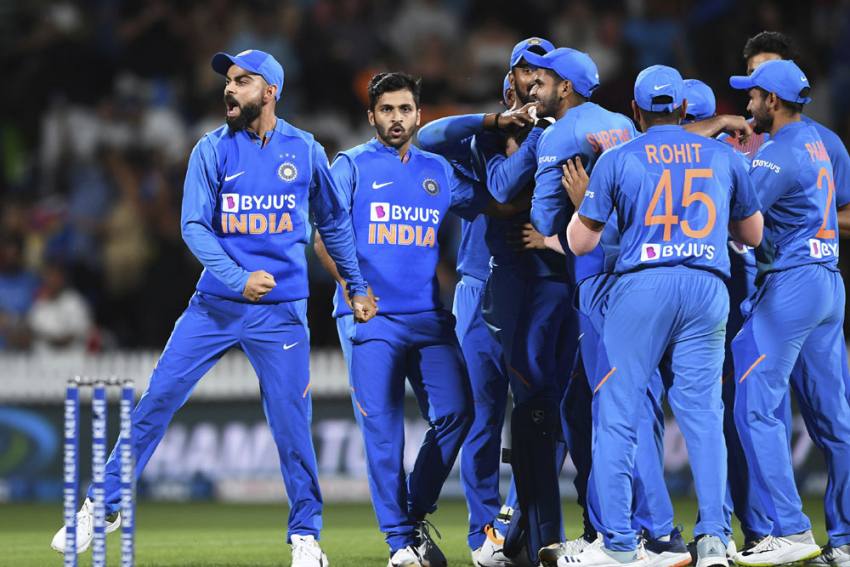 Virat Kohli celebrates as the game is tied and goes to a super over during the Twenty/20 cricket international between India and New Zealand in Hamilton.
AP
PTI February 01, 2020 00:00 IST 5th T20I: Dominating India Aim For 5-0 Whitewash Vs New Zealand 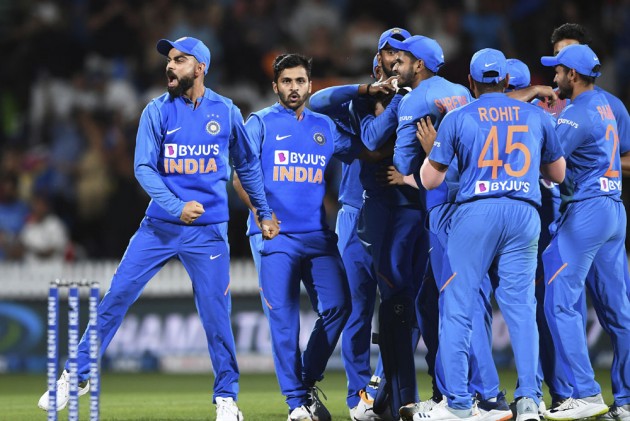 Invincible so far, India will eye a rare 5-0 whitewash against a bruised and battered New Zealand in the final T20 International, on Sunday.

New Zealand have never lost all games in a bilateral T20I series (three or more matches) at home.

While this puts India in a unique position going ahead, they will still stay fifth in the ICC T20I rankings behind Pakistan, Australia, England and South Africa.

India will have their mind set elsewhere though, pertinently the experimentation cycle ahead of the T20 World Cup in Australia. The fourth T20I was a step in that direction, but it mostly came to nought with the likes of Sanju Samson and Shivam Dube wasting their opportunities.

Samson has been promoted up the order in his limited opportunities against both Sri Lanka and New Zealand, and has been dismissed while attacking the bowling.

The team management would want him to show more patience, while backing him to come good once again. Meanwhile, Dube has lacked footwork against both spinners and pacers.

Elsewhere, with Manish Pandey firming up the number six spot, Shreyas Iyer could be promoted to number three. The bigger question is about the keeper-batsman spot.

Ever since the Australia series at home, K L Rahul has played with an increased workload in that role. Pre-series, skipper Virat Kohli had more or less confirmed that Rahul would continue to keep in the ensuing three-ODI series. While he has been in great form, the team management could afford to rest him and bring in Rishabh Pant.

There is incentive to do so, for this fifth and final game of this series is the last T20I India will play in the current 2019-2020 season. In the shortest format, there is only the Indian Premier League to look forward to in two months' time, and the next T20I series – against Sri Lanka later in the summer – is quite far away.

Pant, meanwhile, has been benched since suffering concussion in the first ODI against Australia in Mumbai. While he has fully recovered, his spot in the first-choice playing eleven is long gone. In fact, his status in the current scheme of things is far worse.

At the Westpac Stadium, Rohit Sharma was rested to create an additional space in the batting line-up. Logic dictates that Kohli will take Sunday off and Rohit could lead instead, thus continuing with the one additional batting spot.

In the bowling department, Jasprit Bumrah could be rested with Mohammed Shami coming back to maintain the three-pacer theory.

Meanwhile, Kane Williamson is expected to be fit for the clash, after he missed out in Wellington due to a left shoulder niggle. The Black Caps' team management were confident of his recovery even on Friday.

The hosts will have greater concern over their lack of finishing though, after squandering two last over winning positions in two consecutive games, and the series along with.

Whether the Kiwis can recover mentally and beat an Indian side that is flying high on confidence and momentum, could eventually have a bearing on the ODI series as well.