Kumble revives fond memories of Kotla as he strikes four vital blows in the closing session to bring India back into the contest after Muralitharan had plotted a dramatic Indian collapse with a seven-wicket haul. 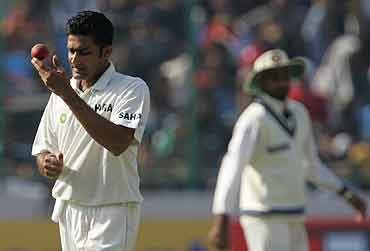 Anil Kumble revived fond memories of Feroze Shah Kotla as he struck vital blows in the closing session to bring India back into the contest after Muttiah Muralitharan had plotted a dramatic Indian collapse with a seven-wicket haul in the second Test today.

The wily Muralitharan mesmerised the Indian batsmen with a stunning spell which sent India packing for a mere 290 in their first innings but the hosts hit back through Kumble to seize the initiative on an eventful second day which saw as many as 13 wickets fall.

The Lankans were cruising at 175 for two before suffering a middle order collapse against the wily leg spin of Kumble who left the visitors at a shaky 198 for six at stumps.

Kumble picked four for 54, all his wickets coming in the last session at the cost of only 18 runs, to put the skids on the Lankan wheel which was rolling smoothly following a century partnership between captain Marvan Atapattu (88) and his deputy Mahela Jayawardene (60).

Atapattu showed his return to form and seemed headed for a century before an inside edge off Kumble to short-leg was brilliantly snapped by Gautam Gambhir to bring the curtains down on the day's play.

Kumble also broke the crucial third wicket partnership by trapping Jayawardene leg before at a time when the visitors were turning the heat on the Indians.

The 35-year-old, who had taken 10 wickets in an innings at this venue in 1999, then removed Thilan Samaraweera and Tillekaratne Dilshan off successive balls to turn the match on its head. Sri Lanka are trailing by 92 runs with four wickets in hand.

The day's early honours went to Muralitharan who recorded his best figures in the sub-continent with 7 for 100 which saw India being dismissed a quarter and an hour into the morning session on the second day. The Indians, 245 for three overnight, lost their last seven wickets for 17 runs, three of them for no runs at one stage.

Sachin Tendulkar, who recorded a world record 35th hundred last evening, could add only nine runs this morning before he was adjudged leg before for 109 off Muralitharan.

Atapattu had struggled for runs during the limited over series and his average during the previous visits to India was a borderline 30 including a hundred at Chandigarh in 1997-98.

Today, however, he batted in his typical style against both the slow bowlers and fast bowlers. The captain was shrewd enough to leave the strike at times to his more exuberant partners at the other end, first Avishka Gunawardene and then Jayawardene.

Atapattu reached his half-century with a single off Kumble before the vice-captain took over the baton.

From 14 at the stroke of tea, Jayawardene smoothly accelerated. The pitch was benign and the right-hander was glad to step out to the slow bowlers.

Two lofted on drives off Harbhajan Singh over mid-wicket saw the 28-year-old from Colombo stamp his class.

Jayawardene's dismissal came against the run of play, as he played a sweep to Kumble without getting into position and missed it completely to be ruled leg before.

Jayawardene's association with Atapattu was worth 113 runs from 199 balls.

Kumble then rattled Tillekaratne Dilshan's stumps off the next ball to bring India back into the game. Atapattu fell as the shadows lengthened despite the visitors keen to close the day without further damage.

In all, the Lankan captain faced 202 balls from 275 minutes and struck 11 fours.

Earlier, Gunawardene had overcome his initial shakiness to bat fluently when Irfan Pathan struck him in front of the stumps for 25.

The left-hander struck five fours during his 93-minute stay and added 54 runs for the opening stand with Atapattu. 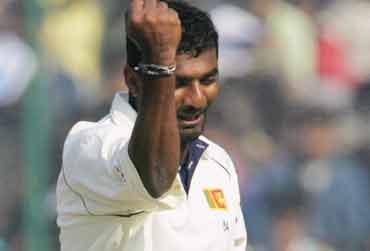 The Indians, regarded as the best players of spin, were bamboozled by Muralitharan's 'doosra'.

Saurav Ganguly was the first to go in the sixth over of the day when he offered no stroke to a 'doosra' from around the stumps. The left-hander added one run to his overnight 39.

It brought to an end a 121-run partnership for the fourth wicket from 247 balls.

Leg-spinner Malinga Bandara accounted for Yuvraj Singh in the next over, the Punjab southpaw coming in for Virender Sehwag, playing across the line to fall leg before.

Muralitharan then struck twice in the following over.

Tendulkar tried to sweep the off-spinner and was struck on the pads, ending a 310-minute stay at the crease during which he faced 196 balls and struck 14 fours and a six.

Pathan was out on the last ball of the over, caught at forward short-leg. The holiday crowd then cheered Mahendra Singh Dhoni for a few big shots, but the Jharkhand player departed after striking one boundary, playing inside the line of a 'doosra' and losing his woodwork.

Kumble was beaten by the flight of Bandara before Harbhajan became the last victim of his counterpart.

The last wicket gave Muralitharan figures of 10.4-2-23-5 today. It was his fourth five-wicket haul against the Indians.

The Lankan openers faced a few anxious moments against the new ball but after lunch, as on the opening day, the pitch eased out and batting became more comfortable.

Two loose deliveries from Kumble, put away for four through cover and point allowed Gunawardene to calm early nerves.

But Pathan, after trying both the ends, got the breakthrough when Gunawardene played across the line.

Five balls later, Sangakkara played a loose drive and edged it to Kumble for a simple catch.

Atapattu, however, was in good nick. His stepping out to Kumble and driving the leggie for a four through cover showed his confidence.